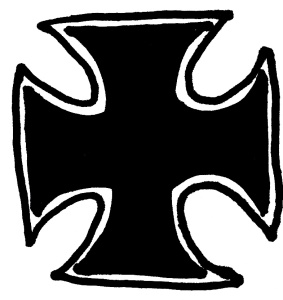 Sometimes a movie comes along that’s so awful, you wonder why anyone even tried, or how anyone who watched the final product could have ever signed off on its release. The Hatred is such a film: a bargain basement haunted house flick about four young women and a little girl being terrorized by the apparition of the long-dead daughter of a Nazi war criminal via a mystical object that induces hatred. It’s as nonsensical as it sounds.

The film opens with an overly long sepia-drenched prologue showing the day-to-day rural “1950s” life of Samuel Sears (Andrew Divoff, aka the title character of the Wishmaster series, and definitely someone who deserved better than this), an escaped Nazi higher-up who now lives a life of simplicity on his “farm” alongside his wife Miriam (Nina Siemaszko) and daughter Alice (Darby Walker). Samuel receives an ugly iron cross talisman along with a personal letter of thanks from Hitler himself for his service, both of which he boards up inside his Nazi paraphernalia room. Alice, ignorant of her father’s past, wants to start going in to town and open herself up to being courted by local boys, but Samuel keeps her locked away in their home. One day, however, his anger is so great that he drowns Alice in a water trough and hides her body. The local police are unable to locate her body and assume that she has run away. Miriam eventually kills Samuel and leaves the home herself, never to appear in the film again.

In the present day, Regan (Sarah Davenport) is en route to the home of a family friend/professor, to babysit his daughter Irene (Shae Smolik) for a period of time. My apologies if this is vague, but so is the screenplay. Along for the weekend (?) are her friends (Gabrielle Bourne, Bayley Corman, and Alisha Wainwright). After a couple of run-of-the-mill scares and the occasional bump in the night, the ghost of Ashley enacts revenge and picks the girls off one by one until the film concludes with Generic Horror Ending 3.01A: Final Girl™ and Precocious Innocent Child™ escape from Haunted House™.

This feels like a movie that fell through a portal to a parallel dimension where David Decoteau makes films for a straight male audience. Decoteau, for those not in the know, earned his stripes directing B-horror fare like Creepazoids! and sequels to various Full Moon properties, like Puppet Master and Prehysteria. In the late nineties and continuing into the new millennium, however, he took up directing direct-to-video in-name-only horror flicks starring young actors and underwear models looking to break into the industry. His filmography is largely composed of fare like The Brotherhood and its five (!) sequels, Boy Crazies, Haunted Frat, and other homoerotic “movies” that exist primarily as vehicles for long, static scenes of nubile white twinks with only one film credit showering and running around the woods in their briefs. Also, sometimes Alexandra Paul is there.

With the rise and spread (no pun intended) of the internet, the demand for softcore not-quite-porn subsided, leading Decoteau to new heights of laziness, churning out family fare like A Talking Cat?! and An Easter Bunny Puppy. This isn’t meant to be a dig at Decoteau; the man got his start working for Roger Corman after all, and movies like Beastly Boyz are an important part of DTV film history even if they’re no longer relevant. And the man obviously learned a lot from Corman, seeing as he managed to release seven films in 2011 alone. The problem is that it’s painfully apparent that he’s not even trying anymore. He just shoots all of his movies in and around his house now, with no attempt to hide his apathetic approach to cinema (there’s a couch made out of the back of a VW Beetle that appears in every single film).

The Hatred is in this same vein. The midcentury “farmhouse” that is the setting for the introduction (which takes up over a quarter of the film’s runtime and is, despite its laziness, still the best part of the film) is obviously a modern home, in spite of the half-assed attempts to disguise this with set dressing. It’s not out of the question that the Sears family would have a wicker loveseat or ornamental mirrors, but they probably wouldn’t have been the kind you can see at your nearest Target, or have been awkwardly placed in the background in such a way that it was obviously covering a modern electrical outlet. The sepia is so omnipresent that you get the feeling you’re watching a film set in the 1800s, not the 1950s, and the dissonance of that visual rhetoric makes it impossible to take it seriously, even when Divoff, Siemaszko, and Walker are giving decent performances (regardless of truly atrocious dialogue).

This is a movie that’s coming apart at its (very visible) seams at all times. The location is never established in the dialogue; there’s a shot of the North Carolina flag early in the film, but when Regan’s gaggle of gal pals is giving her a hard time about her decision to move to “the country” from “the city,” we’re never given a clear picture of where either of these places are supposed to be. Is “the city” Raleigh? Is “the country” Louisburg? The lines as written and recited paint a picture of Regan as a NYC gal moving to some distant backwater. There’s an ineffable haziness to the whole film that would be notable if the filmmaker was creating a timeless dreamlike Everywhere, but it’s not–it’s just lazy. As further illustration, in the same scene where this “expository” dialogue is spoken, the girls express appreciation for “hot cowboys.” The audience does not see these cowboys in a reverse shot, nor did the director stick an extra in a flannel shirt and jeans and have him pass between the women and the camera; it’s just the four of them looking off-camera and exaggeratedly waggling their eyebrows. Lazy, lazy, lazy.

What separates this from being a true alternate universe Decoteau film, however, is the overall lack of any impropriety. One of the girls (Stock Character 40A.4™) is killed by the vengeful spirit while talking her boyfriend out of phone sex, which is so scandal-free it’s almost laughable. There are no shower scenes or long tracking shots of Regan and a friend slowly walking down a hallway in their bleach-white undergarments. All of the girls are quite pretty and are perfectly suitable as the gender-bent equivalents of Decoteau’s stable of twunks. In fact, I would dare say that they’re all far more talented than any of the one-and-done “actors” from Decoteau’s films, giving performances that range from passable to decent, although the lead actress feels a little insincere, like an overly-kind waitress that you recognize is being nice to you because she has to (here’s a tip, boys: she’s never flirting with you; she’s working).

Normally, even if a film is objectively bad, we here at Swampflix can still find something nice to say about it, or advise that there could be a specific audience who could glean some nugget of joy from a mess. Not this time, I’m afraid. To call this film “half-assed” is to betray an ignorance of fractions; I’d be surprised if even a quarter of an ass was used in the making of this film. There’re too many great movies, streaming and not, to waste your precious time on this stinker.