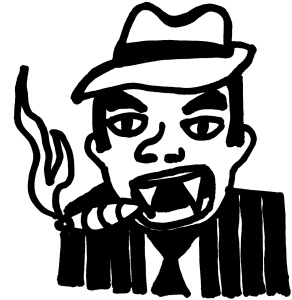 It’s difficult to say for sure exactly why our current Movie of the Month, John Landis’ vampire mafia horror comedy Innocent Blood, flopped on its initial release in 1992. Critics were lukewarm at best to the film, but similar opinions from folks like Roger Ebert about Landis’ An American Werewolf in London did little to stop that film from gaining a cult audience just a decade prior. Personally, and I know this isn’t a very popular take, I feel that Innocent Blood is pretty much on par in quality with An American Werewolf, especially in its horrific special effects & dark sense of humor. So, it puzzles me exactly why An American Werewolf hextupled its budget at the box office while Innocent Blood failed to gain traction.

Whatever the exact reason for the disparity in Landis’ only two horror comedy features’ financial successes, it could not have helped Innocent Blood‘s chances that the film arrived during a particularly active year for vampire cinema.  While An American Werewolf in London had only to compete with The Howling & Wolfen in 1981 (not that three werewolf movies in one year isn’t impressive), Innocent Blood shared a calendar year with no less than at least seven other vampire features. There were certainly vampire films that made a great deal of money in 1992, but among the dozens of similar works released in the late 80s & early 90s it’s still conceivable that a couple of good ones could’ve gotten buried by the crowded market, Innocent Blood being chief among them.

I’m not going to bore you with reviews of each of 1992’s vampire movies. I will, however, link you to the trailers for every one that I could find, just to give you an idea of how overwhelming the year’s onslaught of vampire media might’ve been. Innocent Blood was very much of its time & couldn’t possibly have been made in another era, and it’s that exact quality I believed contributed to its financial & critical downfall. 1992’s selection of vampire films are chronologically listed below along with their IMDb-provided plot synopses & dates of release to provide context of the crowded vampire market Innocent Blood was facing.

“A mother-and-son team of strange supernatural creatures move to a small town to seek out a young virgin to feed on.” [written for the screen by Stephen King]

“Three vampires wander the streets of Melbourne killing, screwing and taking drugs. They decide to carry out a heist, stealing three million and attracting the attention of various psychotics, who chase them through a blood spattered odyssey into the Melbourne underground.”

“A flighty teenage girl learns that she is her generation’s destined battler of vampires.” [written, of course, by Joss Whedon]

“Marie is a vampire with a thirst for bad guys. When she fails to properly dispose of one of her victims, a violent mob boss, she bites off more than she can chew and faces a new, immortal danger.” [directed, of course, by John Landis]

“The vampire comes to England to seduce a visitor’s fiancée and inflict havoc in the foreign land.” [directed by Francis Ford Coppola, the most successful vampire picture of 1992]

“Condemned to life without end, and to an undying passion for a lost love he can never find, a vampire stalks a beautiful young woman.”

“Alexander Hell, SCOTT SHAW, is a cross-dimensional mercenary. He rides his Harley out of the dark abyss to send ancient vampires back to Hell.”

For more on October’s Movie of the Month, 1992’s Innocent Blood, check out our Swampchat discussion of the film.