Maybe the trick to becoming a genuine, enthusiastic fan of David “A Talking Cat!?!” DeCoteau is to watch as many of his low-budget, low-effort novelties as possible, even if you don’t especially enjoy them.  Individually, each DeCoteau film I’ve watched to date has been a disappointment, failing to live up to the full camp potential of their absurd premises.  And yet, I’ve become fonder of the horndog galoot with every subsequent letdown.  If nothing else, I’m in awe that he’s managed to direct 174 features over the past four decades despite never showing any detectable passion for his craft.  DeCoteau conveys none of the unflappable zeal for filmmaking that you’ll see from other underfunded but manically persistent auteurs like Matt Farley, Don Dohler, or Ed Wood.  He’s become most infamous in genre schlock circles for his profound laziness, filming his modern straight-to-streaming novelties in his living room & backyard with no attention paid to changing up the décor to suit the setting of individual productions.  It’s an incredibly frustrating dispassion to encounter in a relatively famous horror auteur at first, if not only because it’s the exact opposite quality I’ve been trained to expect and appreciate in my outsider-artist genre filmmakers.  And yet, the more times DeCoteau disappoints me the more my affection & admiration grows.  I’m starting to love that he gets to make his stupid little anti-effort genre comedies from the comfort of his luxuriant home, that he’s been lazing about on the payroll of notoriously hard-working schlockmeisters like Roger Corman & Charles Band.  If nothing else, it’s just nice to see someone live the dream.

The best way I can track my reluctantly growing appreciation for DeCoteau is to compare my recent reaction to his topless novelty horror Nightmare Sisters to my reaction to his near-identical topless novelty horror Sorority Babes in the Slimeball Bowl-o-Rama just two years ago.  Both films use an uncomfortably racist caricature (in this case, an Indian palm reader) as a launching pad for nudist shenanigans among a coterie of low-level 1980s scream queens in sorority drag.  Whereas Slimeball Bowl-o-Rama torments its VHS-cover babes with a wisecracking puppet, Nightmare Sisters transforms its spooky pin-ups (Linnea Quigley, Brinke Stevens, and Michelle Bauer) into the monsters themselves.  They start the film as nerdy sorority sisters who can’t land dates, but a run-in with a cursed crystal ball transforms them into topless bombshell succubi who bite off frat boys’ dicks.  It toes the same thin line between horror comedy & softcore porno as Slime Ball Bowl-o-Rama, but it’s a lot more honest & upfront about what it’s doing – staging its most memorable scene in a clawfoot bathtub so the horned-up succubi have an excuse to monotonously scrub each other’s bodies while giggling at nothing in particular.  The film is by no means great, but it is often adorably quaint as a VHS-era nudie cutie with a soft Halloween theme.  It’s got all the exact highlights and lowlights of Slimeball Bowl-o-Rama, except this time around I found those details cute instead of annoying, something I can only attribute to my growing affection to the goofball behind the camera.

Besides his trademark laziness, DeCoteau’s calling card as a schlockteur is his cutesy, sexless brand of homoeroticism – which usually just amounts to casting twinks & chiseled-abs jocks in ostensibly straight roles, giving each film the feeling of a gay porno that just never fully came together.  Because Nightmare Sisters is a Reagan Era comedy aimed specifically at teen boys’ libidos, it’s unsurprising that the frat boys villains’ go-to insults for the nerdy pledges under their thumbs are an unimaginative barrage of homophobic slurs.  Those jocks are punished for their crimes by having their dicks bitten off by the anti-heroine succubi, whose sorority house is decorated with tighty-whitey beefcake postcards of celebrities like Tom Selleck flexing their hirsute muscles.  More to the point, Linnea Quigley’s big song-and-dance number when she transforms into a punk-rocker succubus is a love tune in which a woman pines for a gay prostitute, directly contrasting the straight-boy sex appeal of the flesh on display with the much more substantial homoeroticism flowing just beneath the surface.  The central conflict of Nightmare Sisters is that the frat boys & sorority girls can’t have sex without magical intervention, because they’re just too nerdy to admit what they want or to go for it.  Considering the girls’ and boys’ mutual disinterest in each other and the much more pronounced tension of the frat house hazing rituals that get in their way, their problem might be that this tits-and-blood horror comedy is just too gay to allow them to hook up.  It’s all so campy and insincere that it makes the heterosexual mating rituals of the American college student feel like retro kitsch.

Like with Sorority Babes in the Slimeball Bowl-o-Rama, my favorite parts of Nightmare Sisters were its opening credits (including a rockin’ song with the lyrics “Suck you, suck you, succubus” from a band called Haunted Garage) and its A+ poster.  It shouldn’t be a surprise that the two films share so many merits and faults, since they were apparently filmed the very same week with most of the same cast & crew.  What is surprising is how much more fun I had watching this lazily tossed off DeCoteau novelty when its better-funded, slightly more effortful predecessor left me so cold.  Maybe if I watch a couple dozen more of his shameless, passionless frivolities I’ll even get around to calling one “good”. 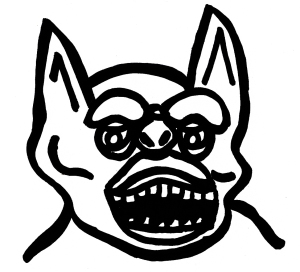 It’s a shame that the David DeCoteau horror-comedy curio Sorority Babes in the Slimeball Bowl-o-Rama couldn’t live up to the glorious sleaze of its A+ title, but what movie possibly could? From the hot pink comic sans & video game keyboards score of its opening credits to the Porky’s-level slimeballery of its nerds-desperate-to-get-laid rising action, everything about the film’s opening act plays like an attempt to undercut the expectations set by that wonderful title. It almost worked too. Once I adjusted to the limited scope of its horny teen-boy sexuality & no budget DeCoteau shapelessness I started to have fun with the film as a low-stakes Full Moon Entertainment acquisition (the exact VHS genre territory that encapsulates the entirety of the Canuxploitation schlockteur’s catalog). Unfortunately, it was the Full Moon calling card of a pint-sized monster puppet that interrupts the film’s party-time sleaze and sours the mood past the point of enjoyability.

Three virginal nerds escape the boredom of their college dorm by spying on a sorority pledge initiation ritual: a softcore display that leans heavily into girl-on-girl spanking erotica. Once inevitably caught in the act, the boys are paired off with the pledges they spied on for a much less titillating hazing ritual: being dispatched to break into the bowling alley at the nearby shopping mall. As you would expect, this transgression releases a demonic puppet known as an “imp” who lives in an enchanted bowling trophy. The imp then tortures the college-age bimbos of both genders by granting a series of backfiring monkey’s paw wishes. Sorority Babes in the Slimeball Bowl-o-Rama is half sorority-initiation spanking erotica (which is admittedly fun for what it is) and half a goofball creature feature centered around this itsy-bitsy-cutie demon, who actively ruins the mood. It’s not that his design or his kills aren’t passably amusing. It’s that he’s inexplicably voiced with a minstrel show-level racial caricature, which is a deeply ugly impulse the film never recovers from.

The one saving grace of this picture as a cult curio is that it managed to collect an impressive gaggle of 1980s scream queens – The Slumber Party Massacre’s Brinke Stevens, Hollywood Chainsaw Hookers’s Michelle Bauer, and all-around Sleazy Slasher goddess Linnea Quigley. You can see that exact trio share the screen in other titles like Nightmare Sisters, however, without having to suffer the “comedy” stylings of this film’s racist puppet. Only Quigley breaks through the tedium of the script with a notable performance, playing a no-fucks-to-give biker who hates the other character’s guts just as much as the audience does. Otherwise, the only exciting character work here is in the light kink teased in the sorority sisters’ prurient enthusiasm for spanking new recruits. Their horned-up declaration that “It’s better to give than it is to receive” frames them as young lesbian dominatrices in training, which the movie can’t help but accentuate with some leather fetish gear when a wish goes awry in the tiny, racist hands of the demon imp.

It’s a shame that this film never fully veers into genuine softcore porno, since that’s where its heart truly lies. A few occasional stunts like a car flipping over, a victim being set on fire, and a human head being substituted as a bowling ball justify its designation as a horror comedy, but it’s foremost a sorority-set spanking video that’s unfortunately hosted by a minstrel show puppet. I suppose there’s some novelty in seeing that kind of genre territory poke around a bowling alley setting and I highly doubt this is the worst specimen in DeCouteau’s expansive catalog of cheapo oddities, but there’s still not much to recommend here beyond an A+ title & poster: 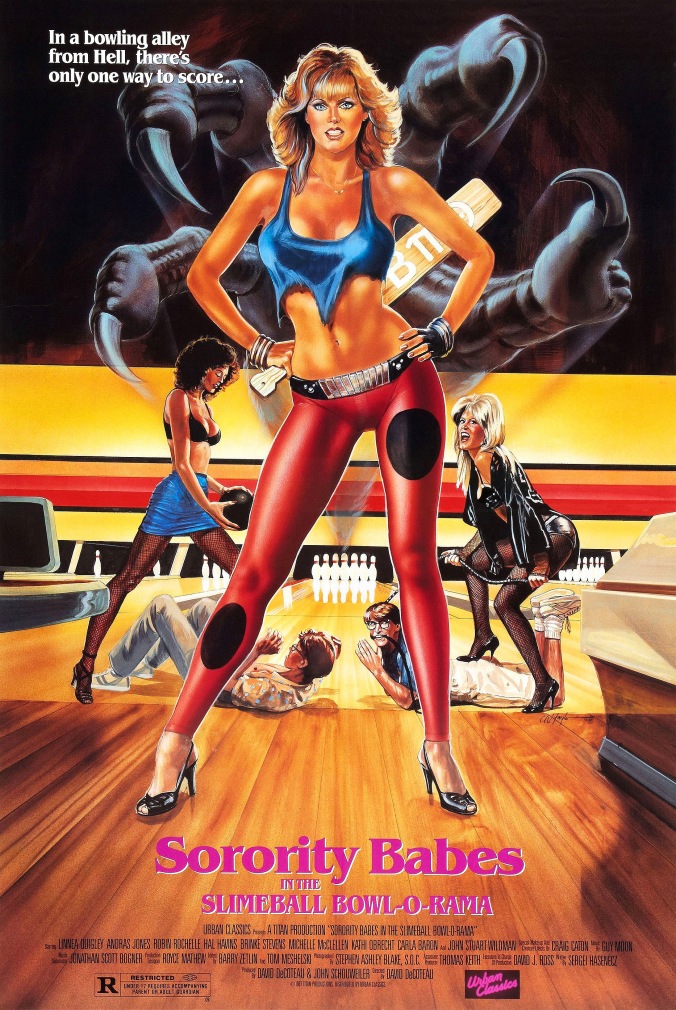