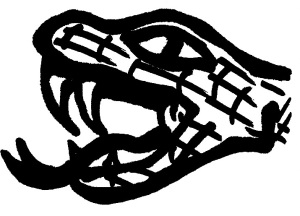 I suscribe to the belief that British director Ken Russell was one of the most underappreciated madmen in all of trash cinema. Titles like The Devils, Crimes of Passion, and Altered States stand as immaculate works of over-the-top shock value provocation. Russell filtered the seedier sex & violence of schlocky genre films through the meticulous aesthetic of art house cinema. He operated as a kind of bad taste prankster who knew deep in his bones how to appeal to a more refined audience, but gleefully indulged in cartoonish violence & sexual humor instead. It’s difficult to say exactly which Ken Russell film would be the perfect introduction to his hyper-violent, oversexed, art house pranksterism (Crimes of Passion is a personal favorite of mine, at least), but his 1988 Bram Stoker adaptation The Lair of the White Worm is as good of a place to start as any. The film operates as a kind of crash course in his pet obsessions as a crude auteur: hallucination, transgressive sex, religious blasphemy, lethal women, etc. It’s by no means his classiest or his most formally precise feature, but it covers a lot of ground on exposing audiences to what makes his work exciting & worthy of reappraisal, while still making no excuses for how cheap & ludicrously ill-considered his personal brand of provocative trash-art cinema could be.

Russell admittedly plays loose with the plot details of Stoker’s original The Lair of the White Worm novel, reducing its atmospheric (and by all accounts incoherent) horrors into an erotic farce about reptilian vampires. He still shows more respect than that pulpy source material likely deserves, however, as it was written late in Stoker’s life when his mental facilities were fading and included many strange bouts of Dracula-rehashing & racial philosophizing Russell smartly excised. One major difference between the book & the movie is the choice of when to reveal the true nature of the villain. Stoker saves the revelation that the conniving female royal of his novel is actually a shapeshifting snake (“worm” is kind of a misnomer) until very late into the proceeding. Russell, however, wastes no time. Actor Amanda Donohoe’s shapeshifting reptile villain is costumed to look like a bipedal cobra in the film; she wears hoods, scarves, and cowls that immediately make her appear snakelike in her cold, ultra-modernist rural England mansion. She makes no real attempt to hide her reptilian nature from potential victims either: she steals a giant dragon-like snake skull discovered in the first scene for an occultist ritual; she invites visitors to her home to play a Snakes & Ladders board game; she boasts of going “snake watching” in the woods. Long before she reveals her comically oversized vampire fangs & spits hallucination-inducing venom, the audience is well aware that she’s some kind of humanoid “worm.” Russell spends no more time covering up that his villain is a monster than Todd Browning did in his Dracula adaptation. As soon as you see her, you know. The mystery, then, is what sexual, sacrilegious terrors she’s planning to exact on her villains.

Hugh Grant appears as a kind of Van Helsing archetype destined to defeat this reptilian sex villain as part of his family heritage. Peter Capaldi, Catherine Oxenberg, and Sammi Davis round out the cast, partly to maintain Stoker’s original story structure and partly to diversify Donohoe’s victims. Donohoe slithers around in high class dominatrix gear, sexually teasing & occasionally draining the blood of the entire crew and any horny teen boys who happen to wander into her lair. She flicks her tongue before lunging in for a kiss, like a snake surveying its prey. She spits a hallucinatory venom that triggers trippy, sacrilegious imagery pulled directly from previous works Altered States & The Devils. She occasionally transforms into a giant, Falkor-like snake puppet that recalls an especially demonic creation from Sid & Marty Croft. All of this torment & mayhem culminates in a demonic sex ritual that involves a deadly strap-on phallus and a bottomless pit where Donohoe feeds her almighty worm beast. The Lair of the White Worm is a hallucinatory free-for-all of sex, violence, and religious blasphemy, the only possible outcome of Ken Russell making what’s, at heart, a simple vampire picture. If you want to get a good idea of the director’s aesthetic as a madman provocateur, all you need to do is compare this reptilian, horndog monster movie to any stately Dracula adaptation out there (of which there are too many, whereas there’s only one Ken Russell).

Loving Ken Russell means disregarding any & all personal desire for subtlety. Very early on in The Lair of the White Worm Donohoe sensually sucks snake venom out of a hobbled cop’s leg while a cheese-coated saxophone wails on the soundtrack, matching the already porn-level acting of the film’s brayed line readings. In that moment, we know the nature & intent of the villain, the film’s disregard for coming across as erotica, and the exact tone of absurdist humor & violence Russell intends to amuse himself with. All three of those elements are only heightened & dragged further away from subtlety from there. The Lair of the White Worm may not be the director’s most carefully constructed or well-considered work, but it’s pure Ken Russell, something to be cherished by trash-gobblers & cinephiles alike.