I always find myself seeking films that make me feel uncomfortable, and I’m not exactly sure why. It’s like I’m being rebellious against my own anxiety, trying to see how far I can go before my head explodes from nervous tension. Interestingly enough, Nicolas Roeg’s 1988 film, Track 29, is an unbearable, squirmy mess of a movie that found me. I was searching for a romantic comedy on Filmstruck to watch while I cleaned my apartment this weekend, and the moment I saw the movie poster adorned with a young, punk rock Gary Oldman, I immediately pressed play. If I knew what I was in for, I may have held off on making such a quick decision.

Track 29 is a visually stunning film with a disoriented plot, heavily reminding me of past  Movie of the Month film Crimes of Passion. This is definitely one of those films that takes more than one watch to completely absorb. I’m not sure if I’m ready to hit this up a second time just yet, so my interpretation of all the film’s madness isn’t very refined.

Linda Henry (Theresa Russell) is a lonely American housewife that longs for a child and affection from her doctor husband, Henry Henry (Christopher Lloyd), but he’s more interested in playing with his model train set. Henry also lacks a sexual attraction to his wife, which may be due to the fact that she acts like a 5 year old and refers to him as “Daddy” in a childlike voice in her attempts to turn him on. He does, however, get his rocks off by getting spanked by a nurse he’s having an affair with at his place of work. The nurse is played by Sandra Bernhard, and I can’t think of a better actress to watch spanking Christopher Lloyd. The strange thing about Linda (or at least one of them) is that she brings her childlike behavior out of the bedroom. She has full-blown tantrums when she gets upset, screaming like a baby through her braces-filled mouth, and she even has a disturbing collection of baby dolls. It’s obvious that Linda is damaged.

One day, a young British man named Martin (Gary Oldman) mysteriously appears in town, and Linda runs into him at a local burger joint. There’s an obvious connection between the two, but it’s not yet known exactly what that connection is. He continues to mysteriously appear when Linda least expects it, and it is revealed that he is her long lost son. When Linda was younger (15 years old, I think), she was raped and impregnated by a carnie and forced to give her baby up for adoption. Linda is ecstatic to find out that Martin is her son as she spent years thinking about what happened to the child she was forced to give away, but then things start to get weird. One moment, she’s caressing his face in a motherly way, and the next moment, she making out with him on the floor of her home. Martin is just as impulsive as his mother, and watching the two of them go in and out of tantrums & make-out sessions is enough to make you feel like you’re going insane. The question “Is Martin real or not?” stuck in my mind through all of this. From this point on, the film becomes stranger and stranger as the minutes roll by.

It becomes obvious that Martin is a figment of Linda’s imagination when she is sitting with him at a restaurant having quite the orgasmic conversation, and the camera flips to the perspective of the restaurant staff, revealing that Linda is alone at the table. As her relationship with non-existent Martin intensifies, the film becomes a fever dream, ending with a mysterious violent event. It’s as though Linda drove herself to insanity because she never successfully filled an empty hole that existed because her child was given away, which is absolutely ridiculous. The notion that giving up children for adoption or having an abortion causes women to become mentally ill is so dumb, and I truly hope that Track 29 was not intended to be as misogynistic as it seems.

All in all, Track 29 is a pretty dark film that pushes the envelope with all the weird incest crap, but it’s also so wacky that it’s fun to watch. The secret to enjoying this movie is to just not take it seriously at all. 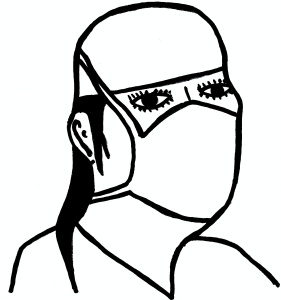 I’m having a difficult time understanding exactly why I Am Not a Serial Killer works as well as it does. The movie doesn’t ever fully succeed at any of the various genres it touches: horror comedy, murder mystery, familial drama, creature feature. Its story is frustratingly thin for a plot that shows so much potential in its initial ideas. Big character moments & narrative payoffs feel strangely removed, as if there were entire scenes missing from the film (a possible result of being adapted from a more fleshed out novel). Yet, I left I Am Not a Serial Killer with a fairly positive feeling about it, which means I’m either a sucker for the genre territory it touches in its sprawling horror nerdery or that the movie was doing something charming & worthwhile in such a subtle way that I didn’t at all take notice of the mechanics.

I’m at the very least clear on what the movie’s biggest strength is. The lead performances from old-timer Christopher Lloyd and newcomer Max Records (who is competing fairly strongly with Royalty Hightower for best celebrity name I’ve heard in a while) pull a lot of the weight in terms of the film’s entertainment value. Records stars as a teenage recluse & mortician’s son who’s been diagnosed as having predictors for potential serial killer behavior: pyromania, animal cruelty, stalking. He’s never portrayed to be a bad kid, though, just one who’s oblivious to social cues, unable to see why, in some instances, you can’t just gut someone with food utensils when they’re bullying you at school. As the title indicates, our protagonist never does follow through on his brief flashes of murderous impulses. He instead uses his morbid fascination with the true crime profiles of serial killer “celebrities” like Jeffrey Dahmer & Ted Bundy to track & identify a mysterious killer that’s stalking his small town.

Although it eventually finds some unexpected supernatural territory, the murder mystery at the center of the film is never as interesting as Records’s performance. The way he responds to his sociopathy diagnosis with, “That’s kinda cool,” or confesses to a flirtatious girl at a Halloween party, “I was thinking about dressing up as my mother, but I was worried what my therapist would say,” makes for some great slacker humor in a heightened crisis that calls for a more engaged response. For his part, Christopher Lloyd is as charming as ever as a quietly creepy, but tenderly sweet doddering old fool who knows more than he initially lets on. If there’s anything special about I Am Not a Serial Killer lurking under its Buzzard-esque Gen-X shrug of a coming of age thriller, it’s somewhere in those two actors’ performances and the way they interact.

I can’t help but think that this movie might have worked better as a television show. The non-existent law enforcement, the handsoap-pink embalming fluid & practical effects surgery of its morgue setting, the Toby Froud creature design, and organ music soundtrack all feel like they would be more at home on a serialized horror comedy show like a Buffy or an iZombie. Even the mortician’s name, Mrs. Cleaver, feels written for television. There are enough books in this same series that the material could easily support its second life as a weekly TV series, but I’m not at all negative on the version of I Am Not a Serial Killer that we got here. Even if I’m not sure exactly how or why I was charmed by this low ambition genre jumble, I’m still glad to have seen the performances Lloyd & Records deliver within it. They just might’ve been better served if fleshed out to a season long arc of serialized television.