Grab your cargo shorts and flash art tattoos, folks. Nu metal cinema is back in a big, dumb way. Vin Diesel has briefly stepped away from his long-time role as a Corona-swilling patriarch in the Fast & Furious franchise to resurrect his other embarrassingly dated late 90s action vehicle, xXx. Diesel selflessly returns to his role as Xander Cage, “the rebel the world doesn’t know it needs,” to save the human race with such heroic acts as collecting high-fives while skateboarding downhill, gliding across jungle dirt on snow skis, and bravely bedding entire rooms full of Nameless Babes so that he can turn to the camera and mumble, “The things I do for my country,” like a pilled-out Bugs Bunny. xXx: Return of Xander Cage may not feature a Rammstein concert like its first installment or Family Values Tour ’98 vet Ice Cube like its second, but it is comfortably seated in that same X-treme Attitude nu metal cradle. It’s as if the film acknowledges its status as a far-too-late action sequel by dialing the culture clock all the way back to the early 2000s to accommodate its own wallet chain macho inanity. The results are oddly endearing, even if persistently ugly. Its soundtrack may have been swapped out for dubstep, but Return of Xander Cage still shines as a small scale nu metal miracle, an abrasive rap rock nightmare preserved in the foulest amber.

Does it matter exactly why Xander Cage returned to the international spy game? Actual-talent Toni Collette chews scenery as a menacing G-man/humanoid IKEA monkey who drags Cage back into action by informing him that his former mentor (played by Samuel L. Jackson, naturally) has been murdered via espionage technology that can strategically down orbiting satellites. Cage reluctantly agrees to retrieve this nefarious device, but refuses to do so with the team of untrustworthy supersoldiers Collette’s Evil Bitch government stooge assembles for him. When Cage grills the G.I. Joes about their experiences with X-Treme sports like base-jumping & snowboarding, they retort “We’re soldiers, not slackers.” Wrong response. He nukes the team in what plays like a sincere version of a MacGruber spoof, but decides to forego his past life as a lone wolf, instead borrowing some of his Daddy Dom character’s obsession with “family” in the Fast & Furious franchise to build his own X-treme, rag tag crew of crazed stunt men, EDM DJs, computer geek Millennials, and lesbian snipers. Everything that follows is a loud, dumb blur of shoot-em-up action cinema inanity, with occasional touches like dirt bike/jet ski hybrids and Godsmack-reminiscent nipple tats distinguishing it from any other borderline competent example of its genre. They get the device. They save the day. They put the government in its place and walk away with their collective rebel status intact. There’s even a ludicrous last minute cameo that makes the whole thing feel like a real movie instead of a hazy, bullet-ridden nu metal daydream. It’s all in good fun.

As much as Return of Xander Cage likes to pretend that its team-building exercise is actually important to the plot, the movie is still largely just a loving prayer at the altar of Xander Cage (and, by extension, Vin Diesel himself). It’s right there in the title. No one else truly matters. Entire villages cheer his presence. Little kids look up to him in awe. He delivers every one-liner with a JCVD-style lethargic drawl, as if he’s so pleasantly relaxed in the role that he’s half asleep. When someone hands him a bomb he mumbles, “Oh boy, here we go again,” rising to twirl in a lazy circle while firing a machine gun, yawning, and literally checking his watch. His entire crew is qualified to save the day, but they’re asked to hang back as his cover. Everyone is visibly horny, but only Xander Cage gets to fuck. It’s super cool and totally worth mentioning that this dumb, spiritually-backwards action film has a mostly POC cast (including an over-qualified Donnie Yen among its ranks) and the only scene dominated by white male faces involves an evil boardroom of business pricks threatening to tear the world down. It’s just also funny that the diversity in the crew is mostly for naught, as they’re ultimately no more significant than any one of Xander Cage’s many Tough Guy clip art tattoos.

It may sound like I’m being a little tough on Return of Xander Cage, but it’s a tough customer; it can take the pressure. This is actually a pretty fun version of what it is: mindless shoot-em-up action cinema with a fetish for X-Games style stunts. It’s just impossible not to poke fun at every leering shot of tight leather mini-skirts, every dumb objective like “Get there fast and take this guy down,” and every stupid one-liner like “It’s like finding a needle in a stack of needles.” At this point in modern taste & decency, X-treme action cinema has no comfortable, legitimate home and the xXx franchise addresses that concern by bullheadedly avoiding giving a shit about taste or decency. It’s a nu metal hangover stuck so far out of time that it had to abandon its angst rock roots for an EDM soundtrack that’s also hopelessly outdated, just by a narrower margin. It’s in this overgrown bro cultural faux pas that Return of Xander Cage emerges as cute & oddly quaint in its ironically mild brand of “X-treme” entertainments. 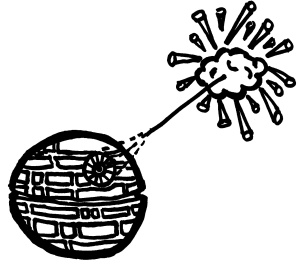 When I found out last year that there were going to be 6 new Star Wars films — not just the new trilogy, but three stand-alone films as well — I was skeptical. As excited as I was about the final trilogy, the in-between films sounded like nothing more than a money grab. But after seeing Rogue One, the second entry in the reboot, I’m pretty sold.

Before watching The Force Awakens last year, I kind of lost myself in fan theories and had fun with the idea of Jar Jar Binks coming back as the ultimate big baddy, but for Rogue One I went in blind. After all, chronologically it happens in between Revenge of the Sith and A New Hope. People who are even slightly familiar with Star Wars know how this plays out, but it turns out there were a few twists and turns I didn’t expect. Rogue One frames the rest of the series in a much darker light. It brings a revived urgency and anxiety to the franchise, which I hope was probably there when Star Wars was first released in 1977. It manages to make the Death Star not just an impractical super weapon and the Empire a floundering bureaucracy that can’t teach its Stormtroopers how to aim. No, the Empire is a real frightening threat. Despite Disney’s CEO insisting that this is not a political movie, there’s quite a bit of war imagery and themes that are being presented in a time when the threat of fascism seems to loom. I mean, the movie itself is about a rebellion. The notion that it’s not political is naive and out of touch. But I guess you should never count on a multimillion dollar mega corporation to stand by the radical media that they inadvertently release

Rogue One follows Jyn Erso (Felicity Jones) and Captain Cassian Andor (Diego Luna) of the Rebel Alliance. They form a group of misfit rebels with Andor’s brutally honest droid sidekick K-2SO (voiced by Alan Tudyk), a blind force warrior Chirrut Imwe (Donnie Yen), his big gun toting conterpart Baze Malbus (Wen Jiang), and a defecting Imperial shuttle pilot named Bodhi Rook (Riz Ahmed). Together they work against the Empire to smuggle the plans of the the Death Star to the Alliance. One big problem I had, though, was that the characters are not as developed as they should be. I keep hearing people say that it’s a lack of screen time, but in the case of Jyn I really think that they had ample opportunity to present her as more than just another brunette leading lady with good aim and an uncanny ability to scale vertical surfaces. I also thought that Cassian could have been a much more interesting character. As he is, I don’t really buy the vague romance that he and Jyn are supposed to have by the end of the movie. Though with Star Wars, it’s usually the minor roles that win hearts. Chirrut and Baze are a great pair, and K-2SO is a real pal. I’d like to have had more from Riz Ahmed’s character, instead of shoving him to the background and referring to him as “the shuttle pilot” half the movie, though.

What the movie gets right, it gets really right. The villains are scary. Somehow Rogue One was able to present a fresh introduction to Darth Vader, which is great because this is the first time we’re seeing Vader as Vader, really doing his thing, since Return of the Jedi thirty-three years ago. He is used sparingly and masterfully, and is truly terrifying and cruel. It’s so great to hear James Earl Jones’s voice coming out of that mask again. The gestures were spot on, right down to that iconic Vader finger wag. This is not the “NOOOOO!” moment of the prequels. This is true Vader. Peter Cushing’s Grand Moff Tarkin also gets resurrected as a total computer recreation. Despite the general mixed response, I found to it be extremely impressive and convincing.

It’s also a pretty movie. It really captures the look and feel of a Star Wars movie. There’s hazy shots of star ships gliding across horizons at sunset and far off planets in the distance. One of the locations in particular really stands out. There’s a moon called Jedha, with a city and a temple that we’re to assume belonged at one point in time to the Jedi. There’s an aerial shot of the landscape featuring a giant, ancient Jedi statue on it’s side in the sand that, nerdily enough, reminded me of The Gates of Argonath, the great statues of kings on the river Anduin in Lord of the Rings. There’s some really cool costumes too: floor length bright red robes in the cities, Chirrut’s semi monk style clothing, and some retro helmets made a comeback.

In the day and age of reboots and series revivals Star Wars has taken the lead for quality. The two newest movies have proven that the old “if it ain’t broke don’t fix it” attitude works out and has even redeemed a franchise so nearly killed by its own creator. Rogue One was far from being the nostalgia fueled money grab I expected, and actually left me feeling some complex things.