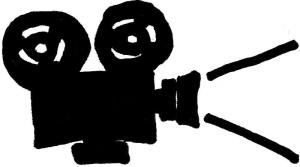 It’s usually around Mardi Gras when the city wakes up from its winter slumber, suddenly coming to life after months of hibernation. Tourists start to arrive in town to drink in the streets & enjoy the sunshine while their friends & loved ones freeze in the snow back home. Locals stop acting like total babies about what passes for “the cold” down here and venture at least as far as their front porches to enjoy the second lines & boiled crawfish. Mardi Gras is only the start to this Spring awakening, however, and the spirit to excess rolls right on into our festival season, which stretches on as long as it can before it’s too hot too drink gallons of beer in the daylight and visitors abandon us for the summer. Jazz Fest stands tall as the most obvious pinnacle of the season, but French Quarter Fest has recently been giving that juggernaut a run for its money. What used to essentially be “Jazz Fest for Locals” is now ballooning to be its own feature attraction, drawing thousands downtown for deliciously cheap local food & free music. To my recent discovery & surprise, it also features a free film festival.

I’ve been to French Quarter Fest a few times over the years, but this year was the first I’d ever heard of a film festival accompanying the better advertised attractions of food, drink, and local brass. Located just outside Jacskon Square at Le Petit Theatre, a venue that traditionally stages live drama, the film festival is a cocoon-like respite in the center of madness, the eye of a drunken storm. After wandering from stage to stage, drinking like a madman & downing hot sauce-soaked poboys in the heat (and unfortunately this year, the rain) it’s difficult to describe just how much of a relief it was to sit in a darkened, air conditioned room and watch movies. Presented by the folks behind Timecode: NOLA, the offerings at the French Quarter Film Fest are a well-curated group of documentaries seemingly selected to make the city look good for visitors. It featured several documentaries I had never seen before as well as ones I already know intimately, essentially upper crust of the kind of New Orleans-praising fare you’d expect to catch on late night PBS. 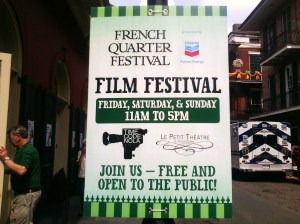 I attempted to catch one film a day at the festival to get a decent sampling of its offerings, but my Friday afternoon plans got derailed when I coincidentally ran into a friend at a live performance on Royal Street and ended up missing the classic, doc Always for Pleasure. There pretty much is no substitution for the all-encompassing sampling of New Orleans culture in Always for Pleasure, but it’s a film I already know well (and one that’s currently available on Hulu), so I had no qualms with missing it for a chance to enjoy French Quarter Fest’s more traditional offerings of booze & live music. Actually, I feel like it was even more in the spirit of the movie to miss it. Filmed in the 1970s, the Criterion-approved Les Blank documentary truly is the best introduction to local culture that I could possibly imagine. Where else are you going to find soul legend Irma Thomas sharing her red beans & rice recipe and Allen Toussaint explaining the significance of jazz funerals & second lines. There’s also glimpses of crawfish boils, Mardi Gras Indians, St. Patty’s Day celebrations in the Irish Channel, and what essentially amounts to music videos for Wild Thcopitoulas & Professor Longhair. An interviewee in Always for Pleasure describes New Orleans as “The City that Care Forgot” & “The last city in American where you can feel free to live,” and the supporting images that surround those claims make it feel like he might be onto something.

On Saturday, I not only made it to the screening I wanted to catch; I desperately needed to. After sweating it out in the drunken, downtown masses, it was a life-saving sensation to watch the documentary He’s the Prettiest: A Salute to Big Chief Allison “Tootie” Montana’s 50 Years of Mardi Gras Indian Suiting. He’s the Prettiest obviously has a much more focused subject than Always for Pleasure, choosing to narrow in solely on a profile of Mardi Gras Indian Chief Tootie as he dressed for his final outing. Tootie is not only a significant chief because of his 50 consecutive years of suiting, but in the innovative artistry he brought to the practice. Instead of merely continuing the traditional Mardi Gras Indian beading he inherited, Tootie introduced the concept of 3-D designs to his suits, elevating the painstaking bead work to unparalleled levels of intricate design. He’s the Prettiest is less interested in the history of Mardi Gras Indian culture than it is providing a platform for Tootie’s work to shine. It’s essentially a moving art gallery for beautiful designs, a constant tribal soundtrack of thumping tambourines & rhythmic chants providing a rich texture for bead work that would already be dazzling in a silent, still image. It’s an important profile of a brilliant, unfortunately deceased artist whose work doesn’t receive as much formal fine art praise as it should.

On Sunday afternoon, once the rain died off, we caught the final film of the festival, Faubourg Tremé: The Untold Story of Black New Orleans. Initially conceived as a history lesson reviving a forgotten storyline in which New Orleans was a historical forerunner in racial equality & integration, providing then unheard of freedoms for people of color long before the 1960s Civil Rights movement (freedoms sadly poisoned by the years of Jim Crow), the documentary about the historic district of Faubourg Tremé was derailed by a little storm called Hurricane Katrina. The final third of the film captured a time I rarely care to revisit, a time in which most people couldn’t afford to return to the city they knew & loved and the ones that could struggled to piece their lives (and families) back together from the wreckage. It was an emotionally crippling note to end the festival on, but once I stepped back onto the city streets and watched a nameless group of ten-to-fifteen year olds playing traditional brass music draw a lively crowd outside the French Market (most likely the best set I saw all festival) I realized that Faubourg Tremé was for the most part a depressing story because it was an incomplete one. It captured the city’s incomprehensible lows (right down to the storm’s irrevocable psychological damage & a beyond troubled history of race relations), but did not have the time to capture the resiliency that brought the city back to life in the years following the broken levees. We all went through Hell to get here, but there’s plenty of our culture left to make the struggle worthwhile.

The couple of screenings I successfully made it to at this year’s French Quarter Film Festival were surprisingly well-attended, but also decidedly low-key. It seemed to be mostly older couples who, like my lame-ass self, needed a break from the external madness of drunken tourists and admittedly overpriced drinks (hey, at least they pay for the music). More importantly, the films selected had the kind of celebratory quality that gets you genuinely excited about your own city & culture in a heartfelt way, especially in the last minute acknowledgment that we’ve been through Hell together. There were plenty of opportunities for me to fall in love with New Orleans all over again at this year’s French Quarter Festival, like trying my first ever alcoholic snowball (which honestly wasn’t all that different from a daiquiri) or listening to any brass band you can name jamming outside the US Mint or overhearing a cop explain to a couple of passed out crust punks, “Look, if you want to sleep out here, you gotta do it by the river.” That sense of civic & cultural pride was surprisingly just as potent in the mid-afternoon darkness of Le Petit Theater as it was on the busy streets surrounding it; and it was just as simple as watching a couple of movies in the dark with a few strangers/neighbors.