This is essentially the story of two mismatched tops struggling to dominate each other, both barreling towards ruin because they won’t do the obvious thing and break up.  I’m always a sucker for stories where characters are compelled to repeatedly do things that are obviously going to kill them just because it makes them super horny; this version is even somehow refreshingly sentimental in its romance . . . when it wants to be.  Karl Lagerfeld’s fetish-fashion designs for the dominatrix’s wardrobe also afford it some wonderfully vivid imagery.  Genital torture & horse deaths aside, Maîtresse is commendable.  It’s only when I stop thinking about it as an individual work and consider it instead in the larger continuum of how dominatrices’ inner lives are portrayed (or ignored) on-screen that I’m disappointed it didn’t transgress in even more pointed, narrative ways.

Every now and then, The Dollar Tree will have a handful of DVDs for, you guessed it, only a buck! Recently, I was going through the infamous dollar DVD pile, and among 10 copies of Madonna’s flop Swept Away, there was a copy of My Father the Hero. After noticing that the film’s cast contained a couple of decent actors (Gérard Depardieu, Katherine Heigl, and Lauren Hutton), I decided to buy it. How bad could it be?

I could sense that the film was going to be pure garbage within the first five minutes, and because I absolutely love garbage movies, I was getting a little excited. The film starts off with Andre (Depardieu), a neglectful father, arriving to New York City to pick up his 14 year-old brat of a daughter, Nicole (Heigl), for a father-daughter trip to the Bahamas. At this point, the acting was horrific and Depardieu looked like Uncle Fester with his bowl cut wig from Addams Family Values. I was loving it! 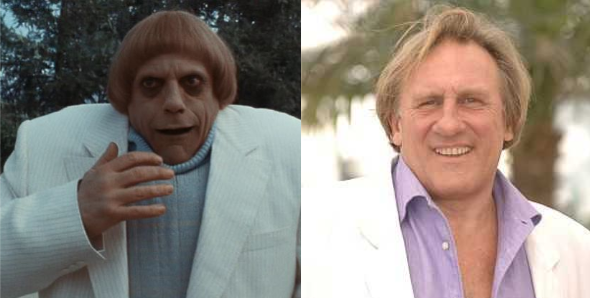 Unfortunately, everything took a turn for the worse once Andre and Nicole arrive in the Bahamas. Nicole develops a crush on an island boy, and she tells him that she’s on a trip with her lover, Andre. Yes, she pretends that her father is her older lover. And it gets even worse! She then tells her crush that she has to pretend that Andre is her father so that they won’t get into any legal trouble. Why would anyone think that this would be a cute idea for a family comedy? I’m sure the writers thought that this “cute” lie would cause the duo to get into all sorts of funny, wacky situations, but instead, it made this film an excruciatingly painful experience.

There are too many awkward moments in this film for me to discuss in this article (it would literally be the entire film script), but here’s my top 3:

I have one wish for this holiday season, and it’s to have all copies of My Father the Hero destroyed. Please, if you are able to spare a buck, look for a copy of this film at your local Dollar Tree and burn it.