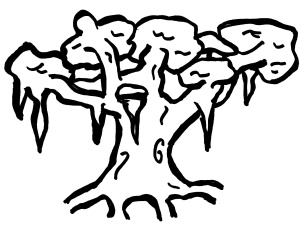 It’s usually preferable to enter a movie devoid of background context & extratextual information, but the recent psychedelic drama Icaros: A Vision is one of those major exceptions that benefit greatly from knowing their production history. Upon recovery from a near-fatal bout with breast cancer, visual artist Leonor Caraballo traveled to Peru to seek therapeutic guidance from the country’s local ayahuasca clinics, specifically the infamous Anaconda Cosmica, to help emotionally process her unexpected confrontation with mortality. While participating in the religious ritual of ingesting the psychotropic plant with the guidance of shamans, Caraballo saw a vision of her own death and returned to her home in Argentina convinced of two things: 1) that she was going to die of the cancer’s soon-to-come aggressive return and 2) that she had to make a film about her experience with the ayahuasca plant. The result of these convictions, Icaros: A Vision, partly serves as a therapeutic processing of dread & grief personal to Caraballo’s story. However, the film also strives to capture the religious reverence Peruvian people find in plants like ayahuasca and to poke fun at outsiders who retreat the ritual that helped the filmmaker through her darkest hour like a colonialist act of tourism. Unfortunately, Caraballo did not live to see the completion of her own film; she guided much if its post-production decision making from her death bed with the help of her co-director Matteo Norzi. What she left behind, though, is a visually striking, peacefully meditative look at the culture surrounding ayahuasca rituals, something much more significant than the humorous take on the yuppie adoption of its use depicted in comedies like While We’re Young.

An American woman arrives at Anaconda Cosmica unsure of how ayahuasca rituals can help her process her fear of death and whether she even has the courage to find out. Other patients paying for the privilege of the retreat are addressing issues varying in severity from addiction & self harm to alleviating a stutter to improve an acting career. The mood of the retreat is decidedly peaceful, a tone commanded by the always-present sounds of the jungle. Invading thoughts of technology, particularly MRI scans of the American woman’s cancer, interrupt the reverie on occasion, but don’t fully elbow out the serenity of the jungle until the night time ayahuasca rituals start & end. During the routine ceremonies, a shaman-in-training peers into the various hallucinations of his patients (or “passengers,” in the movie’s parlance) as if he were literally switching channels on a television. The spiritual difference between natural & technological imagery could not be clearer, as the young shaman attempts (through the ritual of meditative breathing & song) to save the paying customers from invading dark thoughts that could spoil their trip. Early on, the film is about his efforts to save the protagonist from the crippling fear of death sparked by her cancer diagnosis. However, at some point that dynamic flips. The American woman, now strengthened by the psychedelic therapy sessions, helps the shaman face his own fears of an incurable medical diagnosis. It’s interesting to see the service industry aspect of their relationships subvert itself as they naturally become better acquainted through the deeply intimate ritual of ayahuasca ingestion, but more importantly the film uses their tender interactions as a purposefully humanist window into a culture that could be depicted as all meditative chants and visual hallucination if not treated with enough open-minded empathy.

Icaros: A Vision is a quiet, still, meditative piece that fully lives up to the visual focus indicated by its title. Everything from muscular river dolphins & the green of the Peruvian jungle to video game imagery & bright florescent piss shape the film’s all-encompassing meditations on life & death. Somehow, the overall effect is more hypnotic than it is showy or gimmicky. Leonor Caraballo’s background as a visual artist shows in the way she carefully frames each isolated hallucination, but her vulnerability & ultimate mortality as a human being is what affords the work a solemn, but rewarding purpose. Humor at the expense of “passengers” who treat the Anaconda Cosmica like a luxury hotel and its (non-actor) employees/residents like servants are slyly made fun of in a social politics-minded undercurrent of humor. That comedy is just one thread in a larger tapestry, though, and the overall picture includes a hypnotic, but encyclopedic catalog of plants that are important to Peruvian culture, an ethnographic documentation of ayahuasca rituals’ adoption as tourist industry fodder, visual attempts to capture the vivid hallucinations triggered by those rituals, etc. Caraballo clearly intended to encompass the entirety of ayahuasca’s cultural & (to her) personal significance in what ended up being her sole feature film. She was smart to tackle an idea that ambitious by centering the story on an intimate two-person partnership within that larger culture, an act of humility in what easily could have been a (justifiably) self-centered film about her her own internal dread & grief. Ayahuasca is a drug that directly invites humility. Those who trip hardest on it often experience immediate attacks of vomiting & diarrhea (the cleaning of which is addressed by the film’s service industry critique), which leaves little room for huffy self-importance. Maybe that humility & small-scale, intimate empathy that come through so strongly in Icaros is something Caraballo learned in her own therapeutic sessions of ayahuasca ingestion. It’s sad that she’s not around to answer questions like that, but the work she left behind is remarkably dense, complex stuff. I doubt we’ll ever see a better film on the subject.