On of the more popular theories as to why Kathryn Bigelow is the only woman to ever win an Oscar for Best Director is that she almost exclusively makes movies about men. Her prestigious war dramas aren’t exactly jingoistic love letters to American patriotism, but they do appeal to a kind of macho sensibility that helps explain why they would be praised over women-led projects with a quieter, more introspective bent. I don’t believe this is some calculated, cynical angle Bigelow chose in order to earn Awards Circuit accolades, though. The nature & textures of masculinity (and masculine violence) have been an auteurist preoccupation for the director dating all the way back to her early career as a genre film toughie. Her breakout success Point Break is a passionate bromance between an undercover cop and a dirtbag adrenaline junkie. Her cult classic vampire Western Near Dark follows the seduction & indoctrination of a macho farm boy into a subservient role among a clan of ghouls. Her Y2K sci-fi epic Strange Days—our current Movie of the Month—follows history’s greasiest anti-hero’s exploits in worming his unwanted, uninvited way back into his ex’s life. Masculinity is the thematic through-line throughout Bigelow’s decades-long career. It’s even one that concerns her debut feature.

Bigelow’s debut feature as director, The Loveless, is an early 60s motorcycle gang pastiche. It essentially remakes the Brando beefcake classic The Wild One as in introspective art piece (as opposed to Cool as Ice, which remade it as a breakfast cereal commercial). A young Willem Dafoe stars as a tragically beautiful biker brute in his first lead role. Unlike the mouthy charmer Ralph Fiennes plays in Strange Days, Dafoe hardly speaks a word in his leather biker get-up. Rather, his classic machismo is communicated though intense stares and hardened body language. Occasional poetic voiceover about how “the endless blacktop is [his] sweet eternity” suggests there’s a poet’s mind behind his stern eyes and supermodel cheekbones, but that suggestion of vulnerability only makes his machismo more dangerous. When Dafoe’s biker gang parks in small-town middle-America on their way to the races at Daytona, his pronounced male beauty inevitably captivates local women – leading to their ruin at the hands of jealous, abusive townies. Dafoe’s biker beauty isn’t as actively malicious as Fiennes’s scumbaggery is in Strange Days or Patrick Swayze’s hedonistic thrill-seeking is in Point Break, but his leather jacket & rockabilly lifestyle is still a destructive force for those seduced by his allure. His masculinity is both a pleasure & a bane, something Bigelow would expand upon in later works.

Fortunately, her sense of filmmaking craft & narrative purpose would expand as well. The Loveless is visually sumptuous in a way Bigelow’s later features consistently are (reflecting her formal education as painter). However, it’s also frustratingly inert – often feeling like a nostalgic fashion magazine shoot rather than a proper feature film. Willem Dafoe is so goddamn beautiful to gaze at in his leather get-up that it’s hard to complain too much about the film’s narrative shortcomings, but its 82min runtime still manages to linger for a relative eternity. The closest the film comes to exhilarating action is in a climactic, crazed shootout at a townie dive bar. However, it’s a violet display Bigelow later perfected to a very similar effect in Near Dark – making this early trial run feel trivial in retrospect. The entire point of the film, then, is the visual seduction of Dafoe’s macho posing & posturing. It was Bigelow’s very first film and she was already fixated on what masculinity means, what it looks like, and what effect in manifests in the world. There can be a debate as to why that fixation is rewarded in critics’ and awards institutions’ circles over the preoccupations of other women auteurs, but it’s clear to me that the impulse in Bigelow is at least personal & genuine. Like Angela Basset in Strange Days, Keanu Reeves in Point Break, and Marin Kanter in The Loveless, she can’t help but fall for a loveable scumbag.

For more on December’s Movie of the Month, Kathryn Bigelow’s Y2K sci-fi epic Strange Days (1995), check out our Swampchat discussion of the film, our look at the director’s continued fascination with police brutality in Detroit (2017), and last week’s comparison of its police brutality themes to those of Blue Steel (1989). 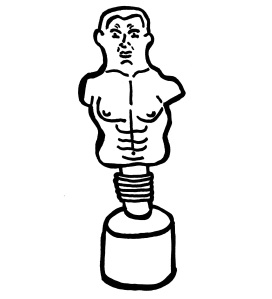 Riley Stearns’s debut feature Faults was a sinister dark comedy about a huckster deprogrammer facing off against a small, mysterious cult that proved to be too much for his limited skills & outsized hubris. Stearns’s follow-up, The Art of Self-Defense, takes on a much bigger, more widespread cult that often proves too much of an insurmountable burden for us all: toxic masculinity. Jesse Eisenberg stars as what MRA types would describe as a Beta Cuck – an unimposing milquetoast wimp who struggles to assert himself both at work and in his private life. When the poor runt is assaulted in a random act of violence by a gang of macho bullies, he commits full-on to the “self-defense” doctrine of a local strip-mall karate dojo with a newfound religious zeal. The dojo proves to be toxic masculinity in a cult-sized microcosm – incrementally indoctrinating our squirmy protagonist further into the hellish depths of Alpha Male bravado. It’s basically the masc counterbalance to last year’s militarized-feminism satire The Misandrists, except that the humor here is much drier than that film’s penchant for over-the-top camp.

It’s easy to reduce the themes of The Art of Self-Defense to “Toxic masculinity is a cult,” because the film itself speaks only in dry, matter-of-fact statements that leave little room for subtext. Everything is labeled clearly, almost to the level of Sorry To Bother You-style surrealism. Businesses have names like The New Restaurant in Town. When Eisenberg is jumped he’s out buying a brown paper bag labeled “DOG FOOD” in bold block letters. When the mugging is reported on news radio he’s announced as “A 35-Year-Old Dog Owner.” There’s a twinge of Napoleon Dynamite quirk humor to this stilted, deliberately underwritten dialogue, but more importantly it allows the film to make fun of the arbitrary distinctions of traditional masculinity by allowing them to be spelled out plainly without embellishment. Rules about what names, countries, music genres, ways of sitting, and word choices are socially coded as being more masculine or feminine are framed as heightened absurdism here merely by being voiced in plain terms, making for a peculiarly understated version of satire. The movie also gets into the allure of the Alpha Male, incel, MRA mentality for insecure, unconfident men as well. Eisenberg explains, “I’m afraid of other men. They intimidate me. I want to be what intimidates me.” You’re not likely to get a more concise explanation of what attracts young men to the real-life cult of toxic masculinity than that, and explaining everything in expressionless, matter-of-fact terms was the most effective way to get there.

One of the more rewarding aspects of Faults was the tension of its central mystery, which keeps the audience guessing throughout on whether its fictional cult is actually tapping into a sinister supernatural power or is just a brainwashing hoax. Stearns drops that tension here, instead telegraphing the answers to all potential mysteries and possible outcomes long before they arrive. I don’t know if that choice makes for a better movie exactly, but it does free him up to make fun of MRA rhetoric early & often. The hierarchal goings-on of the strip-mall karate dojo were never going to be as rewarding as the satirical lens that frames Maxim Magazine as an extremist propaganda rag, manspreading as a saintly virtue, and being nice to your pet dog as feminine “coddling.” That being said, I can’t guarantee this absurdly dry, expressionless humor will land especially well with every crowd. I was the only person in the audience laughing at my (almost exclusively elderly) weekday screening, which is a shame, since we should all be able to take a step back and laugh at the absurdity of systemically enforced gender traits. It’s absolutely fucking ridiculous, but we rarely consider that perspective in our daily lives because we’re fully submerged in it.

I’d also like to point out how cool it was to hear a song from local metal heroes Thou in a professional feature film, even if their genre was lumped in with the absurdist list of macho gender signifiers.