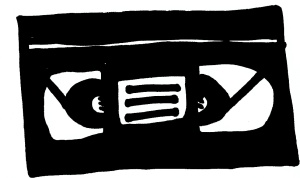 Do you remember VHS board games? What if you found one that was haunted; or worse, possessed? What if completing the game was the only way to save your father’s soul?

Gordon (Graham Skipper) and John (Chase Williamson) Hardesty are archetypically, even stereotypically, different brothers. Gordon is a buttoned-down salaryman with a dependable girlfriend (Margot, played by Brea Grant of Heroes), a mortgage, and skeletons in his closet that have driven him far from his home town. John, in contrast, is a scruffy layabout with frequent run-ins with the law. Their troubled father, the proprietor of a VHS rental outlet, has been missing for seven months, and the two come together to close down his store, sell off the merchandise, and part ways, presumably forever. Following some strange dreams and bizarre nighttime occurrences, the two brothers are finally able to enter their father’s office, where they find Beyond the Gates, an 80s-style VHS board game that contains the last tape their father watched.

Upon playing the tape, the brothers first experience lost time, but when Margot convinces them to play the game, a strange woman (Barbara Crampton, of Chopping Mall and Re-Animator) appears on screen and explains that they must play through the game and go in order to save their father and themselves. The tape is obviously interacting with them directly, not playing straight through, and even attempts to enlist the authorities in the form of their cop friend Derek (Matt Mercer) fail, as he can see nothing on the screen but static. Gradually, the trio comes to accept that they’re stuck in a Jumanji situation, and there’s no way out but to beat the game and go . . . beyond the gates.

This film is a bit of a surprise, as it doesn’t get off to a strong start. Gordon is ostensibly the lead, but Skipper is the weakest actor of the main trio, and his performance comes across as broad and unrefined. Williamson’s John is supposed to be a deadbeat, but other than his perpetual five o’clock shadow, his appearance is pretty well-maintained, and there’s no real menace to his presence. The film is also awfully cheap-looking, so much so that even visually dynamic shots, like the slow pan across seemingly endless shelves of VHS tapes, look more like they were shot for a daytime soap than a feature. Once we’re out of the starting gate, however, the ride gets weirder and gorier until you’re lost in the moment. My roommate even compared the film to those of David Lynch (although I wouldn’t personally go that far), citing that he often evokes the facade of normalcy before tearing down the curtain to show the evil that lies beneath. Here, we start with a fairly basic story about brothers in conflict that gets more cinematically complex as the narrative progresses, until you’re suddenly captivated and carried away by the film than anticipated.

The game itself has a board that’s prettily designed, even if the mechanics are unclear (and ultimately kind of irrelevant), and the gore is both hilarious in its overkill and surprisingly effective in the way that it suddenly appears in the film as a complete surprise after a long period of mostly-psychological horror. There’s also a great attempt to give the characters an interesting backstory, as we learn that Gordon and Margot are working out some relationship issues that arose from his overindulgence, and John’s elaboration of how he was the son who stayed when Gordon went out to find a new life belies the cliches that this genre convention usually relies upon. My favorite part of the film may be the scene in which the brothers visit the shop where the game was purchased and have a conversation with the creepy owner (Jesse Merlin) who’s so delightfully transparent in his evil that his name may as well be “Mr. Needful.”

It takes a little patience to get into Beyond the Gates, but it’s pretty rewarding if given half a chance. There’s a lot of love for the VHS era of horror in the movie’s DNA, but unlike other throwbacks, it’s not beholden to that aesthetic or the trappings thereof. The film is currently streaming on Netflix, and is a delightful way to keep Halloween in your heart on a hot summer night.