You can stay up to date with our podcast by subscribing on SoundCloud, Spotify, iTunes, Stitcher, or TuneIn. 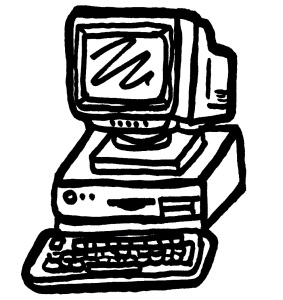 The debut feature of tragically-deceased Japanese animator Satohi Kon (Paprika, Tokyo Godfathers) is taking a 20th anniversary victory lap in digital restoration, so I had the unexpected opportunity to see it for the first time in a theatrical setting. What a fucked-up delight! Because Paprika is one of the few anime films I’ve watched repeatedly over years of admiration & study, I was somewhat prepared for the sugary pop psychedelia & loopy nightmare logic Satoshi Kon established in this predecessor. What I did not expect going in blind was that the film would fit so comfortably within my beloved Evil Internet horror genre, given that it arrived so early in the development of online culture. The internet is fertile thematic territory for the horrors of the Unknown because its mechanics & functions have continued to feel like a novel, depthless mystery to the average user. I can only imagine that effect was even greater in 1997, when a global network of intercomputer communication felt like a man-made miracle. Perfect Blue not only exploits the eeriness of that brand-new unknown by reflecting it in the similar subliminal space of a bad dream & an unraveling mind, but it’s also prescient of the Internet’s worst functions as a future real-world evil – both as a tool for misogynist bullying & as a corrupter of personal identity. Unlike other early Evil Internet thrillers like The Net or FearDotCom, it’s remained effectively creepy instead of devolving into a quaint joke precisely because it got the internet exactly right. It perfectly captures our ongoing, collective online nightmare, despite arriving in a time when the internet was mostly a tangle of blogs & message boards.

A female pop singer is pressured by her managers to leave her music career behind to pursue acting. This professional shift is coded as her public image growing up, leaving behind the girlish innocence of her pop idol persona to pursue a more adult, sexualized career. She lands a small role on a racy “Japanese psycho thriller” TV series (the kind of sensationalist drama that plays for high ratings on HBO in the 2010s), requiring her to perform increasingly sexualized acts for the camera, including participation a brutal rape scene. Pretending she’s okay with this career shift so she appears agreeable to her talent agency causes a rift inside herself, where her still-innocent inner voice (visualized as her former pop idol persona) screams out in dissent. Meanwhile, an online stalker blogs in first-person as her former self, reinforcing the bifurcation between her two personae. The pressures of her job & the online harassment amount to a fever pitch as she starts losing time and waking to find that the entertainment industry goons who pressured her into sexually compromising positions are being found systematically murdered. Her pop idol self, her TV show character, her dreams, and her false online persona all collectively unravel her sense of identity to the point where she can’t say for sure whether she is the mysterious murderer or even if the murders are actually happening. She can’t even answer basic questions like “Am I dreaming?” or “Am I alive?” with any confidence or certainty. Pressures from her pop music fans to remain an innocent child clash with the television industry’s pressures for her to expose her body & pretend to be a rape victim for commercial entertainment – two opposing, impossible standards only she suffers the consequences of as their target du jour. It’s no surprise that the internet is the primary tool of this misogynist cycle, as it’s only served that function more intensely in real life in the decades since.

Early on in Perfect Blue the protagonist receives a threatening fax from her stalker and the machine’s mechanical scrapes & hums mutate into an industrial pop score that overwhelms the soundtrack, heightening the eerie threat technology poses in her insular world. That’s when I knew I would be all-in for the movie’s technophobic feminist nightmare, which only became more rewarding the further it broke apart from reality to sink into the (literal & figurative) machines of misogyny. Like most well-regarded anime, Perfect Blue is technically impressive as a feat in traditional animation, fully utilizing its medium to achieve logic & imagery unattainable in live action cinema. The particulars of how it uses that medium to reflect the eeriness & artifice of the internet, nightmares, and the entertainment industry are a more rarified wonder, especially since it’s an effect that actually has something substantial to say about the exploitation & commodification of women in the public sphere. Perfect Blue can occasionally be super uncomfortable in its depictions of sexual assault, but at least in a way that’s relevant to those themes. Overall, it’s a strikingly beautiful, effectively creepy work of animated psych-horror, one that approximates the full danger & eeriness of the internet in a way that’s only since been matched by the likes of Suicide Club, Unfriended, Nerve, and #horror. I mean that as the highest of praise, as this is a genre I find consistently fascinating, but rarely this effectively scary. It’s worth noting too that the 20th anniversary digital transfer of the film has not seemed to sharpen, flatten, or distort its original appearance the way some digital “restorations” of animated classics have. Perfect Blue looked to me of the exact grainy, matte quality you’d expect an animated 90s movie to appear like on the big screen. Our relationship with the internet may have intensified drastically in the last 20 years, but Perfect Blue appears to remain untouched as a pristine, enduringly terrifying object – a beautiful technophobic nightmare worthy of continued discussion & preservation.