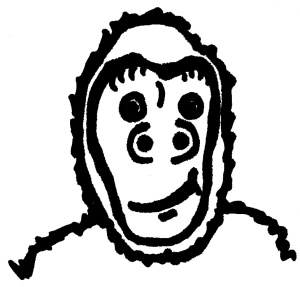 Most discussions of cheap cash-in horror sequels are framed as if they were a phenomenon born of 70s & 80s slashers that have carried over to the modern day. The truth is that it’s a time-honored tradition almost as old as horror cinema itself. For a classic example of the shameless cash-in horror sequel, 1933’s Son of Kong serves as a fascinating specimen. Rushed to market just nine months after the 1933 creature feature classic King Kong, Son of Kong is a massive, kaiju-scale step down from masterful to cute. At a mere 70 minutes, this incredibly thin sequel aims for a lighter, more comedic tone than its predecessor to cover up the fact that it couldn’t match that picture’s scale of production. Grand sequences of stop motion spectacle depicting tribal warfare & a dinosaur stampede were cut for time & budget, leaving the film hanging without a third act. The titular monster was also a goofy echo of the original film’s infamous ape, offering audiences a cutesy, infantile version of a creature they once feared (like, less than a year earlier). Baby Kong’s adorability is almost irresistible as a novelty, though, and the film that contains him is likewise charming in its own limited, misshapen way. Like most modern horror sequels, its genuine thrills are cheap echoes of its predecessor’s former glories, but there’s something amusingly absurd about the lengths it goes to keep an already concluded story alive & open to profit.

The disappointing thing about Son of Kong is that, on a script level, it has a decent foundation for an interesting King Kong sequel. A month after the city-destroying tragedy of the previous film, Kong capturer/promotor Carl Denham is left in unfathomable debt & legal trouble for the damages caused by his now-dead super ape. It’s the logical fallout of an illogical conflict, one the movie talks itself out of as it constructs a reason for Denham to return to Skull Island to meet Kong’s orphaned baby. Exhausted by his status as a public pariah and fearful of rumored criminal indictments, Denham again sails on an explorer’s mission that leads him back to Skull Island in search of legendary (and nonexistent) treasure. There, he’s met with the consequences of his greedy transgressions in the first film: a mutinous crew that refuses to return to the dangerous island, native tribes that embargo the entrance of white colonists because of his theft, and most notably Kong’s helpless baby ape who can barely fight off the island’s other monsters as a goofball orphan with no parental projection. Denham bonds with this pitiful, adorable creature (as well as a female musician he picked up along the journey), feeling immense guilt for the harm he inadvertently caused it. The trouble is that the return of his presence on the island is still unwelcome and puts Baby Kong in just as much danger as his dead ape father.

Although the reduced shooting schedule & budget wiped out her planned third act spectacle, screenwriter Ruth Rose did a commendable job of both keeping the mood light and upping the active involvement of the female co-lead, dampening the original film’s damsel in distress dramatic impulses. The jokes are plentiful and often surprisingly funny, especially in a pure anti-comedy sequence where a musical band of trained monkeys perform for unenthused bar patrons for a relative eternity. Other deadpan reactions like “My father is dead.” “What a tough break,” and a stammering “Well, uh, captain, uh . . . about that mutiny,” also play surprisingly well as the movie often finds genuine humor without delivering outright jokes. Still, it’s difficult to determine exactly how humorous Baby Kong is intended to appear, as many of his action sequences are repeats of the exact stop-motion dino fights that served as genuine special effects spectacle in the first film. Son of Kong is essentially the opening, island-set half of King Kong without the third-act payoff of the city-destroying conclusion, except now everything is twice as goofy & half as visually impressive. The sequel unfortunately also echoed the racist impulses of the first, even adding to its depictions of native savages & undertones of interracial romance paranoia by introducing the character Charlie the Chinese Cook. As amusing as the film can be at any given moment, its faults are both plentiful and glaring.

Cheap sequels have long relied on audiences’ contentment (and even enthusiasm) for reliving former pleasures on a smaller scale and with a goofier flavor. Yes, the creature battles in King Kong are more technically impressive and lead to a more spectacular end, but Son of Kong still features a sequence where a giant ape fights a giant bear in an all-out brawl. Take your entertainment where you can get it. It also helps that the film is at times genuinely humorous in a way that suggests its overall camp value may be somewhat intentional (for those willing to be a little forgiving). It’s difficult to imagine looking at Baby Kong’s exaggerated, googly-eyed mug and suppose the filmmakers were looking to deliver a serious-serious masterpiece, even if is ultimate trajectory is dramatic. Comparing Son of Kong to the original King Kong does it no favors, but it still has an interesting enough premise for a sequel to a film that obviously didn’t need one. In this way, it persists as a mildly delightfully oddity, which has been more than enough to justify fandoms of other cheap, rushed horror sequels released in the decades since. At the very least, I’d like to submit the film’s musical monkeys scene as a genius stroke of proto-Tim & Eric anti-humor, a 90 second stretch of pure cinema bliss that more than justifies the rest of the film’s existence: