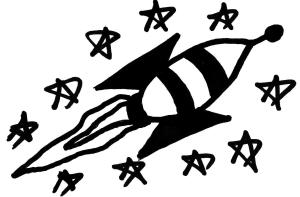 The most surprising thing about Space Station 76 is the giant black hole in the movie’s heart. The film’s retro, space-age aesthetic has been tapped for comedy before in titles like Galaxy Quest & Mars Attacks!, but rarely for such a dark effect. Among the film’s inherent “Hey! Remember the 70s?” gags there is some really twisted humor about subjects like substance abuse, adultery, and suicide. Space Station 76 has its cake and it eats it too, displaying both the cheerful 70s vibes you’d catch from TV shows like The Brady Bunch and The Love Boat and the devastating, real-life problems of the audience that used to watch them.

On the “Hey! Remember the 70s?” side of the equation we have details like roller-skates, crayons, tracksuits, bellbottoms, Farrah Fawcett hair-dos, porn mustaches, luaus, Betamax, viewfinder toys, wood paneling, Muzak, marijuana, children named “Sunshine”, and repressed homosexuality . . . in space! On the depressing side we have two dysfunctional marriages, a woman who despises her body because she can’t conceive, a child who is ignored seemingly by everyone, petty jealousies, overreliance on Valium, and repressed homosexuality . . . in space! There’s some real pain in exchanges like when the infertile woman is told “You can have a baby. Anyone can have a baby. What are you talking about?” and the seething hatred that poisons the crew’s personal relationships is overbearingly intensified by the confined nature of the space station setting. As social etiquette deteriorates and the hatred bubbles to the surface in bursts of unusual honesty, the film becomes one of my favorite types of stories, “The Party Out of Bounds”.

It’s a testament to the cast that the movie is both funny and depressing. Patrick Wilson is amusing as the uptight captain, Jerry O’Connell is perfect as a disco-clad cad, and few people could sell emotional fragility like Liv Tyler does here, but none of those actors are the stand-out star of Space Station 76. The most essential character in the film is a retro robot psychiatrist that dispenses empty, monotone, ready-made advice like “You can’t be everything to everyone until you are something to yourself” as freely as it dispenses prescriptions to Valium. The robot psychiatrist is the film in a nutshell: an image of 70s nostalgia that inspires both genuine laughs & genuine pain in its explorations of clinical depression, familial structure, and self-denial. It’s one hell of a robot in one hell of a black comedy . . . in space!