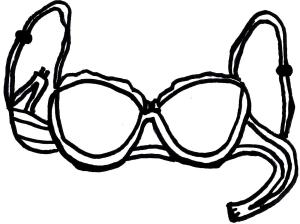 For a time before I moved to Austin three years ago, I flirted with the idea of moving to L.A. and working as a script reader, as a dear friend had for a few years. She gave me a few different scripts to work on doing standard format reader reviews for, and while some of them were quite good (Melisa Wallack’s Manuscript, which ended up on The Black List, was my favorite of these), there were also quite a few that weren’t very good at all. The one that sticks in my mind the most was one entitled Your Bridesmaid is a Bitch, which has an IMDb page that lists it as “in development,” but doesn’t appear to have been updated since 2009 or 2010. I read enough short stories and personal essays in creative writing classes and discussion groups in both my undergrad and grad school that I developed a kind of sixth sense for when something was what could charitably called “revenge writing.” It’s basically when someone (invariably a man, almost always straight) writes out his one-sided feelings about the dissolution of a relationship, recently or distantly, painting himself as the put-upon everyman whose life is disrupted by the she-demon who broke his heart. That Guy in Your MFA didn’t emerge from a vacuum, is what I’m saying, and there’s a universality to the personality that those tweets are mocking which speaks volumes about society, literature culture, the writing world, and college campuses. Even without the laughable “Based on a True Story” caption that opens the film, or the credit that shows that the film was written, directed, and produced by one person (me, out loud, when I saw that on screen: “Oh boy”), I can smell that same malodorous desperation and entitlement all over Adulterers, and boy is it not in service of the film as a whole.

Spoilers to follow for a film you should just skip.

Samuel (Sean Faris) is an assistant manager at a hardware store in New Orleans, preparing to celebrate his one year anniversary with his wife Ashley (Danielle Savre), at the pinnacle of a record-breaking heat wave. He tells her that he won’t be able to come home as early as expected, as he’s picking up a double shift to help pay for the house and his new truck, but in fact intends to go home early and surprise her. After fending off the flirtations of his co-worker Lola (Stephanie Charles), he picks up a box “of dem dark chocklits” along with a bouquet of flowers and makes his way home to the exterior of what appears to be a shotgun house but has the interior of a two-story. While waiting for his wife to arrive from her waitressing shift, he realizes that her purse is sitting on the table, and that there are the telltale grunts of some mischief going on upstairs; he finds his wife in flagrante delicto with another man (Mehcad Brooks). Distraught, he goes downstairs to grab a couple of handguns, then goes back up and shoots them both guns akimbo. Credits!

Or not; in fact, it appears he just imagined this. He again climbs the stairs, and this time confronts Ashley and her lover at gunpoint, forcing them to answer questions about how long they’ve been seeing each other, how they met, and the frequency and content of their sexual encounters (yes: they have done it in the butt). This continues for some time, as all parties are emotionally and physically degraded. Brooks’s character’s name is given as Damien, and he admits that he, too, is married, and that his wife Jasmine (Steffinnie Phrommany) is pregnant with their second child. This is not the first time he’s cheated on her, nor is Ashley, whom he only knows as “Peaches,” the only woman with whom he is committing adultery.

We also learn that Ashley was already married when she met Samuel, but he rescued her from her abusive husband and even adopted her young daughter (whom we never see). Ashley gives a monologue about how she can’t help herself because she’s “broken,” and tells about how this brokenness emerged from being sexually assaulted several times by her father’s employer. Meanwhile, Lola continues reaching out to try and get Samuel to return to work before he loses his job, and when Jasmine calls, Samuel tells her about her husband’s infidelity, she decides to take her own revenge by coming to the house and having sex with Samuel in front of Damien, then telling Sam to dispose of the other man as he sees fit. This descends further into much absurd nonsense, with a lot of “Do you read the Bible?” and “I am God’s judgment” and “I won’t pretend to be a Christian, but my mama took me to church every Sunday” dialogue that I’m sure means you can imagine every moment of this excruciating standoff. Ultimately, it’s left up to God (in the form of Russian Roulette) to decide Damien and Ashley’s fate, and the afternoon’s events come to a conclusion with Ashley smoking a long-deserved cigarette while watching Sam bury her lover.

Except psych! Because of course it is. Samuel really did kill both Ashley and her lover at the beginning of the film, and the entire rest of the film has been his imagining of what would have happened had he not done so. Interestingly, this twist appears to have been so confusing (it really isn’t, though) that even the person who edited the film’s Wikipedia page doesn’t seem to have understood what happened, as it states (as of 02/16/18) that “Sam later finds himself back in reality, just after burying Ashley beneath the rose bed in the back yard. He realizes that he killed his wife and made up a story of her cheating in his mind.” That’s pretty clearly not what happened, as he clearly shoots them both, but you can hardly blame anyone for giving up and just making up their own ending. Unsurprisingly, this kind of “the whole thing was imagined!” plot twist was also common in a lot of the bad scripts I read, not to mention the work of fellow students. In the latter that’s almost forgivable, but in the former it’s a telltale sign that you’re an amateur. That doesn’t matter, I suppose, when you’re the writer, director, and producer, but if you’re thinking of submitting something like this to a legitimate agency or production house, take a tip from your old friend Boomer and just don’t.

There’s so much else going on here that demands to be discussed. I was actually able to track down an interview with director (writer, and producer) H.M. Coakley with the Urban Movie Channel, and it is one of the fluffiest fluff pieces I’ve ever read, and that’s coming from someone who used to do just these kinds of interviews with small name, big ego local personalities when writing for Dig in Baton Rouge. In it, when asked about the origin of the story, Coakley states “The actual idea for Adulterers was based on something that happened to a family member. I remember saying to myself, ‘Wow— what would I have done, if that was me?’” That’s not really what “based on a true story” means, I’m afraid. Just because a friend or family member caught their significant other in the act with someone else, and you imagined what you would do, and what you imagined is a character imagining an interaction with their cheating wife and her lover, that doesn’t make it “based” on anything. That barely makes it “inspired” by something that happened; by that logic, Home Alone is “based on a true story” about that time you imagined what it would be like to be a kid left alone in a mansion at Christmas, and Starship Troopers is “based on a true story” of fascist propaganda.

The worst thing about the interview, however, is this statement from the interviewer: “The story location was steamy & hot New Orleans, Louisiana and the accents, especially Sean’s, seemed quite authentic.” It’s not. It’s really, really, really not. The only authentic thing about this movie is the fact that, if someone were going to cheat on sex-on-a-stick uberbabe Sean Faris (who, in case you didn’t know, looks like this), the only other human being on earth who could possibly make your eye wander would be megahunk Mehcad Brooks (who looks like this). To be honest, either one of them would be worth getting shot. Cinematographer Ben Kufrin‘s pre-2005 C.V. consists almost entirely of titles with the word “Playboy” thrown in there, and while I’m hesitant to say that he shoots these male bodies as lovingly as (presumably) he did the women in his earlier films, this “erotic” “thriller” may at least send you off with visions of chiseled abs dancing in your head. The interview mentions that Brooks expressed interest as early as 2010, which makes sense given that this was after he stopped getting regular paychecks for The Game and True Blood and before he started being able to get paid regularly for Supergirl, where he’s been unfortunately underutilized of late. Full disclosure: Sean Faris’s presence was the only reason I watched this movie, and I’ve long felt that his turn on Life As We Know It should have led to greater market penetration and made him more of a star, but he’s never had the mainstream success that his sister has.

The long and short of it is this: even if you’re trying to find a film that’s set in a hot place to try and make up for the cold, cold winter we’ve had this year, you’re better off watching a documentary about volcanoes. If you just want the visual feast of watching hot people sweating in a stuffy room, there are other, better places to get your jollies.