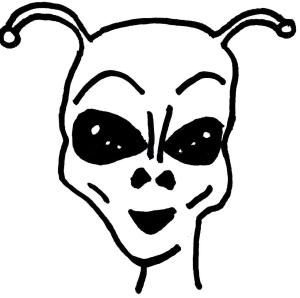 There’s nothing misleading about the title of Strange Invaders. Much like the recently-mentioned Invaders from Mars, the 80s sci-fi cheapie attempts to profess its love for 50s alien schlock sensibilities while updating them for a modern audience, but unfortunately the results are much less successful here than they are in the Tobe Hooper film. There are plenty of interesting ideas at work in Strange Invaders & enough grotesque practical effects to fill a decent YouTube highlight reel, but getting through the painfully paced 90 min runtime is a lot less fun than it should be. This is highly dispiriting, considering that the filmed was partially penned by a young Bill Condon, who I have a certain affection for, but it still remains true.

Strange Invaders‘ plot involves a bland everyman searching for his missing ex-wife in a ghost town populated by some gross-ass aliens who can transform human beings into floating balls of energy merely by zapping them with their fingertip lightning. Oh yeah, and this town, which was, officially-speaking, “destroyed by a tornado”, is temporally trapped in the 1950s. And the government totally knows about it. And the aliens can (and do) mate with the human populace to create human-alien hybrids. And so on & so forth. You’d think that with as much of a narratively stacked deck that Strange Invaders has to play with it’d be a breezily entertaining picture, but the truth is that its sublime moments of occasional alien invasion weirdness are mere respites from a slog of a movie that more of often than not bores its audience to tears.

The most significantly enjoyable aspect of Strange Invaders is its fleeting moments of body horror. Aliens ripping off their human disguises, spewing green blood from bulletholes, and sucking the life out of human victims to add to their precious orb collection are the sole bright moments in an desperately dull film, probably all better experienced as .gifs than as complete scenes. You get a real sense here that Bill Condon has a love for dated genre films, a love best put to use in his breakout film Gods & Monsters, but that influence just makes Strange Invaders al the more frustrating. You can feel a better movie dying to be cut loose from the bland, pooly-paced orb that contains it, trapped in time decades later, still waiting to be rescued in the editing room.