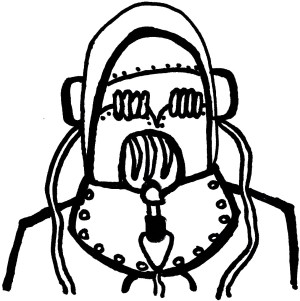 Accessibility to a wide range of movie & television options in the online steaming era has made freedom of choice to be something of an overwhelming burden. There’s too much media to watch and not nearly enough time to even to distinguish which titles are worth the effort. This constant deluge of “content” has created a fascinating attention span phenomenon in the modern media consumer. We’ve reached a cultural paradox where audiences are reluctant to venture to the theater for a three hour film with a serious topic, but will happily binge dozens of hours of a mediocre television show on Netflix or Hulu merely for the convenience of its availability. Genre filmmakers & schlock peddlers of old have dealt with this exact attention span problem in the past, especially when they were catering to the teenage numbskulls who packed drive-in theaters to make out & party in the 1950s & 60s. In the modern streaming era, drive-in schlock has once again become a pertinent form of entertainment. Not only are many films of that era now available for easy (although frequently illegal) access on sites like YouTube; they’re also short & to the point. With over-the-top premises engineered to grab dumb teens’ attention in titles like Billy the Kid vs. Dracula & Frankenstein Meets the Space Monster, these films would typically stretch out only to an hour in length a piece, so that they could easily be stacked in a drive-in double bill. The convenience of being able to watch a goofy, high concept horror in an hour’s time is just as appealing now as it is likely was for anxious-to-neck teens half a century ago. You could gobble down an entire feature in the same amount of time it would take to watch a single episode of Stranger Things (and one that would require about the same amount of brain power).

The problem with a lot of drive-in era schlock, of course, is that the films themselves are often far more dull than what’s promised in their advertising. Old school genre film promoters lived & died by the ethos that it was far more important to get eyes on the screen (and, thus, cash in the register) than it was to deliver a high quality product. Many films with an eye-catching title & a killer poster would stop short when it came to actually entertaining audiences, since their job was already done before the first reel spun. Much like the majority of modern straight-to-streaming movies & television, a lot of drive-in fare was lazy & disposable. Their sixty minute runtimes make them much easier to dig through for the gems than most other eras of genre film entertainment, however, and there were plenty of high quality schlock titles that fully delivered on the promise of their attention-grabbing advertising. I can’t think of a better example of efficient, attention-holding drive-in schlock than the 1964 British export The Earth Dies Screaming. At 62 minutes in length, The Earth Dies Screaming succinctly packs at least three sci-fi horror premises into a single genre picture. It’s a cheap production that effectively conveys the scale of a global threat to humanity while only staging its events in a small studio lot section of London. Without narration or montage, it barrels through a series of paranormal obstacles for its small cast of characters to overcome, only to move the goalposts for victory at every possible opportunity. Its violence is mostly implied, yet its effect is genuinely chilling. As convenient as the movies are to watch, most drive-in schlock admittedly doesn’t bother to deliver a decent picture that lives up to the strength of its advertising; The Earth Dies Screaming somehow delivers three in a single, succinct package.

The film opens similarly to 28 Days Later, with its main protagonist roaming London as seemingly the only human left alive. Lifeless bodies are strewn about city streets as planes, trains, and automobiles crash in stock footage spectacle without navigators. The camera pans up to the sky for a dramatic title reveal in enormous block letters: THE EARTH DIES SCREAMING. Eventually, our square-jawed American hero finds fellow British survivors emerging from the wreckage. As a group, they search TV & radio signals for answers, finding only static & the hum of a strange, menacing tone. There’s little dialogue in this earliest sequence, until the group deduces that the lifeless victims outside have suffered an attack of weaponized gas, the source of which they speculate on without much evidence. Just as they come to a conclusion on what knocked out the first wave of victims, space alien robots arrive to sweep the streets for survivors, whom they incapacitate with a single gentle touch. When the majority of the survivors escape the fate of the alien robots, the robots then raise their dead as zombie drones with whited-out eyes to complete the mission. These individual obstacles don’t even cover the off-screen aliens who are deploying these threats or the mysterious signals being broadcast over television & radio waves. The Earth Dies Screaming doesn’t even devote energy to explaining what happens next after its in-the-moment crisis is solved immediately before the end credits. It just keeps its head down & throws every monstrous evil it can conjure at the screen, any one of which could have been developed into its on individual double-bill filler.

The most impressive aspect of The Earth Dies Screaming‘s genre film efficiency is how it finds the space to allow its central mystery to breathe. Its hour-long runtime is packed tightly with a wide range of villainous monsters, yet its pace is not at all rushed. In the classic Twilight Zone tradition, characters are allowed plenty stage play dialogue to ponder the possibilities of what alien force is planning their doom. The movie is disinterested in these characters as individuals, saving time by boiling them down to archetypes: the American Hero, the pregnant damsel, the uptight aristocrat Brit, the common thief, etc. By skipping in-depth characterization, it allows for unsettling questions to linger between the physical threats of the robots & their zombies. Was it actually a gas that triggered this crisis? What is the signal being broadcast on the radio supposed to signify? Are the characters already dead & navigating some kind of purgatory? Who is their true enemy? It even telegraphs some of the paranoid in-fighting of John Carpenter’s The Thing; the characters viciously bicker in distrust of each other as they fight a common enemy they cannot see.

From the design of its robot monsters to the eerie sounds of its ambient Elisabeth Lutyens score, The Earth Dies Screaming is shockingly well-made for a production of its scale & budget. What makes it a significant work, though, is its ability to cram three movies’ worth of entertainment into the space of an hour. Whether you’re a 1960s teen hoping for extra minutes of smooching after you leave the drive-in or a 2010s serial streamer pressed for time to take it all in, there’s a tremendous value to that kind of genre film efficiency. I’ve watched entire seasons of television with fewer ideas than this film conveys in its first half hour and I greatly appreciate that it doesn’t hang around for too much longer after it gets them across.

Sometimes efficiency is the most impressive quality a movie can boast, especially in the case of schlocky genre fare. From the outside looking in, The Earth Dies Screaming might not appear to be much. As an alien invasion sci-fi horror from the drive-in 60s that barely clocks in at an hour’s length, it’d be easy to dismiss the film outright as a filler title on some indistinct double bill. The film is far more interesting than its pedigree would lead you to believe, however, and one of its best qualities is that it recognizes the limits of its somewhat slight premise and chooses to stick to the point. The Earth Dies Screaming smartly avoids overexplaining the exact scope & nature of its murderous alien threat and instead uses the mystery & minute to minute deadly obstacles posed by its otherworldly dread to propel the plot forward through several unexpected gear shifts until the whole thing’s over before you know it. The film may look cheaply made & hastily produced, but you gotta respect that kind of genre flick efficiency.

Although you can pinpoint other genre films that have utilized individual elements of The Earth Dies Screaming for more fully realized conflicts, this particular cheapie achieves a very specific aesthetic by gathering all of those elements in a single, well-tuned vehicle. I kind of feel like the genre film equivalent of a fine wine snob while watching this one, detecting hints of 28 Days later, The Village of the Damned, and The Night of the Living Dead with a strong The Day the Earth Stood Still undertone rounding out the bouquet. In the film’s dialogue-free five minute opening most of the world’s population is seemingly struck dead by a mysterious gas, later revealed to have been released by a malicious alien race. Planes, trains, and automobiles crash as their individual pilots are strewn about, lifeless. The few survivors in a rural England town find themselves isolated form the world with no radio or television broadcasts seemingly able to make it through the chaos. The horrors don’t end there, though, as an army of killer alien robots is deployed to sweep the streets of any temporarily lucky survivors and, just in case that wasn’t enough, they’re followed by an undead, mindcontrolled zombie hoard. The alien threat of The Earth Dies Screaming is one thing after another, a continually shifting obstacle course that pummels its audience and its victims with just the right rhythm to remain surprising & just the right runtime to never outwear its welcome.

I guess there might be some kind of lesson at the heart of this film about the best attribute of humanity being in comradery. Our would-be victims (ranging from a drunken cad to a young pregnant woman to an all-American alpha male, all strangers) find their best chance of survival in their ability to solve their differences & work together as a unit. That aspect of the film’s formula is faint at best, though, especially when compared to more heavy-handed message pieces like The Day the Earth Stood Still or nuclear paranoia monster pictures like Godzilla or Them!. Here, the alien threat has no real discernible intent outside pure malice. There’s no source or ending for the attack and instead of worrying about context the film instead eats up its runtime with details like its robots’ Touch of Death executions & its zombies’ whiteout contacts. In the age where big budget action franchises have no foreseeable end in sight & follow a carnival act trajectory of promising the next big thing down the road without ever having to deliver a self-contained product (much like pro wrestling or, better yet, those films’ comic book source material), there’s a satisfying quality to this kind of genre filmmaking simplicity that’s more than a little refreshing. Despite what’s promised in this film’s (undeniably badass) title, the Earth could actually use a lot more of this contextless, go-for-broke efficiency.