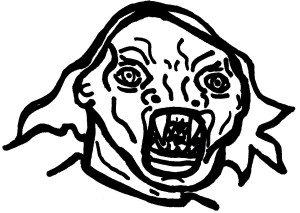 We’ve been scratching our heads all month trying to figure out why Tobe Hooper’s grimy carnival slasher The Funhouse isn’t more of a household name. One of my theories was that Hooper had already changed the game years earlier with his weirdo slasher opus The Texas Chainsaw Massacre, inspiring so many similar oddball horror entries in its wake (Tourist Trap, for instance) that The Funhouse had a little too much company to stand out on its own as anything radical or idiosyncratic. By the time of its release the Tobe Hooper grime of The Funhouse was just a drop in really strange, hideously dirty bucket. Maybe that’s why Hooper’s next return to the slasher genre in The Texas Chainsaw Massacre 2 strived for a much campier, more colorful aesthetic than the original. It was a decision that (intentionally) pissed off a lot of fans at the time of its release, but led to a much more infamous work that’s still regularly discussed today, despite The Funhouse being the better movie overall.

Hooper’s career is wildly chaotic, haunted by ghosts, Martian invaders, sexy space vampires, and all kinds of other horror genre eccentricities that are worlds away from standard slasher fare. The Funhouse serves as a great, typifying middle ground for his difficult to pinpoint work that somehow captured the spirit of both of his violently disparate Texas Chainsaw Massacre films, while still pointing to the otherworldly quality of his non-slasher work. It doesn’t ever bring in the supernatural funhouse goofery of Ghoulies II, but The Texas Chainsaw Massacre 2 also remains grounded in the real world and that film stands as a strange slasher genre outlier in its own right.

It makes total sense that the original Texas Chainsaw Massacre film would have the biggest cultural impact in this trio. Not only was it the earliest & most financially successful title of the bunch, its humans-as-meat slaughterhouse horror is also more darkly humorous than it’s often given credit for. I do believe The Funhouse deserves a closer look than that film’s sequel, though. The gory kills and the cartoon energy of The Texas Chainsaw Massacre 2 have earned it an easy cult following in recent years (not to mention that it seemingly laid out the blueprint for Rob Zombie’s entire directorial career), but I think The Funhouse is more deserving of the attention. Instead of punching up and altering his original outlier slasher like in the sequel, Hooper found new, colorfully surreal ways to repurpose The Texas Chainsaw Massacre‘s energy in The Funhouse that should be regularly celebrated, but is instead largely forgotten. A month after watching it for the first time, I still can’t pinpoint exactly why.

For more on October’s Movie of the Month, Tobe Hooper’s grimy carnival slasher The Funhouse, check out our Swampchat discussion of the film, this comparison of its carnival-setting horrors with those of Ghoulies II (1988), and last week’s look at its unexpected companion in Tourist Trap (1978).