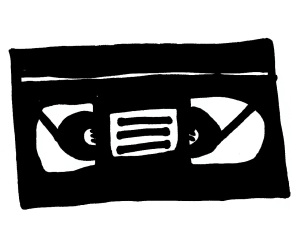 The trash angels at the American Genre Film Archive recently restored & distributed a shot-on-video horror relic from the late 90s that both transcends & typifies its era in no-budget filmmaking. Limbo is a warped-VHS headtrip that’s all disoriented disgust with the world and nothing remotely resembling coherence. It’s more of a cursed object than a Movie, so that AGFA’s restoration feels less like a standard home video release than it does a black magic spell. The Blu-ray disc includes a feature-length commentary track with director Tina Krause, which I’m hesitant to listen to even though it might help make sense of the film’s eerie, disjointed imagery. I’m worried that any context or explanation would deflate its delirious 3a.m. mystique.

The IMDb logline for Limbo is “A woman makes a descent into Hell after she kills a man she brought home as a one-night stand.” That’s a relatively accurate way of describing the final third of the one-hour runtime, but as a whole the film is far too meandering & self-distracted to support any kind of one-sentence plot description, especially one so concrete. Most of Limbo finds Krause dicking around with camcorder effects & morbid ephemera in a spooky warehouse locale. Lynchian horror imagery—complete with a Laura Palmer surrogate wheeled around in a clear-plastic body bag—is filtered through a D.I.Y. video art aesthetic in a haunted, scatterbrained haze. The only unifying sensibility on a thematic level is a disgust with the nü-metal dirtbag men who ogle & harass our traumatized lead. Parsing out anything else feels like trying to make sense of a half-remembered nightmare.

It’s tempting to dismiss Limbo as something that would be best served as a background projection at a Halloween party or raw footage for a music video re-edit. Yet, there’s something potently angry & distraught about its mood that cuts through its lost, dizzied narrative to save it from being tedious (a quality that’s majorly helped by its succinct runtime). Judging by the bonus shorts included on the disc, Krause was mostly working in sleazy SOV softcore around the time she made Limbo, and her sole feature as a director feels like a defiant protest of that genre. This is a deliberately anti-sexy, impossible-to-pin-down video art nightmare with no patience or interest in the typical genre signifiers of its era. It may not satisfy the usual metrics for A Great Horror Film, but its off-kilter details linger with you longer than with more focused, technically proficient works of well-funded mediocrity. In fact, it’s practically spitting directly in those films’ faces.