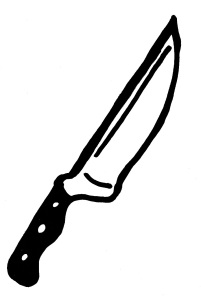 William Asher is known for directing iconic television series such as I Love Lucy and Bewitched, so the fact that he directed the 1982 horror flick Butcher, Baker, Nightmare Maker (aka Night Warning) is beyond strange.  His directing talent, along with the film’s unique story, take this early 80s slasher movie to another level.

When watching the film’s opening, I immediately thought of the  intense opening scene of our August Movie of the Month, The Psychic. In the opening of The Psychic, the main character has a vision of her mother jumping off a cliff. Instead of just watching the character jump and getting a distant view of the aftermath, viewers get to see this poor woman’s face get chipped off as she hits the cliff’s edges on the entire way down. Butcher, Baker, Nightmare Maker takes a similar approach by having very aggressive opening that is totally unexpected. A husband and wife go on a trip, leaving their baby boy in care of his Aunt Cheryl (Susan Tyrrell). While on the road, they realize the car’s brakes aren’t working. This happens a lot in horror movies, but usually there’s a quick crash and it’s over. Well, not this time. The car is screeching all over the highway, and when it eventually crashes into the back of a log truck, the husband gets beheaded by a log. The car then goes off a cliff and becomes as flat as a pancake. If that isn’t bad enough, the car catches fire and explodes.  All that happens within the first few minutes, so if that doesn’t signify that this is going to be an insane movie, I don’t know what would.

Aunt Cheryl becomes the guardian of her nephew, Billy (Jimmy McNichol), after the horrible accident kills her sister and brother-in-law. The film jumps to teenage Billy living with aunt. Cheryl has a peculiar obsession with her nephew that goes beyond being an overprotective aunt. One of the first interactions she has with Billy in the film involves him shirtless and asleep in his bed; she wakes him up by acting like a sexy cat. It quickly becomes apparent that she is sexually attracted to Billy, and it creates this unsettling aura almost immediately. Aside from the incest, Cheryl is an ordinary small-town homemaker. She pickles tomatoes, wears a hair handkerchief, and makes sure that Billy always has a tall glass of milk waiting for him. Her kind demeanor changes once Billy becomes interested in going to college on a basketball scholarship, and she does everything in her power to make sure that Billy never leaves her.

Cheryl’s murderous tendencies and violent past begin to surface once the fear of Billy leaving her becomes a reality. She initially attempts to bang the local TV repairman, Phil Brody, so she can have a man around when Billy leaves. He rejects her advances at first, but then he eventually asks her for a blow job, causing her to lose her shit and stab him to death. Billy and the neighbors find her covered in blood with Brody dead on her kitchen floor, and she claims that he was trying to rape her. I really do hate it when films indulge the “psycho woman that cries rape” scenario because it adds validation to the disgusting myth that women cry rape for attention.

Unfortunately, the ignorance doesn’t stop there. A homophobic lieutenant, Joe Carlson, doesn’t believe Cheryl’s accusations because he found out that Brody was homosexual. He believes that Billy was having sexual relations with Brody and killed him in a lovers’ quarrel. The reason he thinks Billy is gay is because he grew up without a father and was raised by a woman. Yes, this guy is the worst. I swear, every sentence that comes out of Carlson’s mouth contains at least one derogatory term for homosexual, and it’s so hard to not punch his face through the TV screen. He focuses so much on trying to get Billy to admit he’s gay that he ignores signs that point to Cheryl being a cold-blooded killer. One good thing about his character is that he isn’t portrayed in a positive light. His homophobia really contributes to his role as one of the film’s main antagonist, which is pretty interesting, as this film was released in 1982.

The Brody murder is only the beginning to Cheryl’s descent into madness, which brings out the Oscar-worthy acting of Susan Tyrrell. She starts to poison Billy’s milk in order to keep him from leaving her, but once he starts to find out secrets from her past, she quickly turns into a full-fledged monster, killing anyone that tries to come between her and Billy. She cuts all her hair off and goes into this sort of Neolithic state, and it’s one of the greatest moments in horror film history. Once Cheryl takes this turn, the pace of the film picks up speed and the murder weapons become more bizarre (hatchets, meat tenderizers, etc.)

Butcher, Baker, Nightmare Maker is part soap opera and part slasher horror. The combination of the two makes for an amazing horror movie experience. It’s one of those amazing, unique horror films that got lost in the flood of 80s slasher movies, but it does a great job of holding its own.