The closing credits of the 1989 bargain-bin horror novelty Things declares in fuzzed-out block letters, “YOU HAVE JUST EXPERIENCED THINGS.” That kind of neutral, matter-of-fact statement is truly the only way this movie can be assessed, as if it were more of a unit of time or a natural disaster than it is a work of art. Things is delirious, direct-to-video Canuxploitation nonsense – a scuzzy hangout horror filmed on Super 8 and filtered through beat up VHS tapes. It’s near-budgetless & near-plotless, essentially just documenting a small group of Canadian horror nerds as they hang around one buddy’s bleakly dingy home, playing with homemade monster puppets and pretending that they’re Making A Movie. Its ineptitude drifts between disturbing dream logic & mind-numbing tedium so fluently that it’s near-impossible to determine whether it’s Good or Awful as a whole. And yet, it’s fondly remembered as a regional horror gem in cult-movie circles, because genre-trash Canadians are intensely loyal to their own subculture runoff. I cannot stress how much I admire that.

In the abstract, there’s a kind of sub-Cronenbergian body horror element to the premise, in which a couple’s desperate attempts at artificial insemination gives birth to an insectoid mutant creature that must be destroyed. The movie isn’t really about the couple or the mad scientist who created the ant-beast, though. Most scenes just feature a trio of buddies drinking cheap beer in that couple’s living room, while tangential interjections from outside the house occasionally gesture at the vague outline of a plot. This tactic includes sporadic news reports from vintage porn goddess Amber Lynn as TV reporter Amber Lynn, who appears to have filmed her contributions to the picture in less time than it took her to get in make-up. Things smartly paves over a lot of its incoherence with good ol’ Dream Logic, starting the whole thing off with a nightmare sequence just to set the tone. That does little to forgive the long stretches where absolutely nothing happens, and the characters trapped in its no-budget purgatory complain to the audience, “This is so boring.” I can’t help but agree, but its complete lack of purpose or urgency is—against all odds—charming, especially whenever the insectoid baby-mutant shows up to party.

Things mostly survives on the tried-and-true horror formula that Ineptitude + Time = Art. Its rubber monster puppets, Atom & His Package drum machine score, and general Tim & Eric awkwardness are adorable enough to leave most B-horror audiences with a positive feeling, even if we can’t remember exactly what we just “experienced.” The thing that really sticks out to me, though, is the way the actors can barely hold back their smirks, even in scenes where they’re supposedly being attacked by a mutant insect baby. The real joy here is not in what happens onscreen, but in the movie’s trajectory from a weekend art project between friends to a beloved Canuxploitation gem. Things has been cited as “perhaps the worst movie ever made” on several occasions, but even its status as the body horror version of The Room is a sign of respect in my eyes, a testament to Torontonians’ collective interest in exalting their own no-budget genre trash. I sincerely wish our own regional genre nerd community in New Orleans was strong enough to turn movies like Mardi Gras Massacre or The Last Slumber Party into cult classics in the same way. 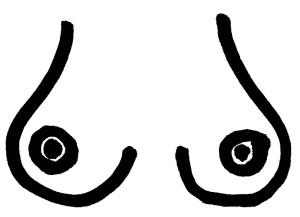 On Wikipedia, Evils of the Night is listed as a “science fiction/porno horror” hybrid. This is technically accurate, but it’s difficult to say if any one of the three genres listed in that descriptor are fully satisfied by the film as a finished product. The first half of Evils of the Night is a delightful novelty. Most cheap horror films are usually criticized for having porn-level acting & sets anyway, so it’s oddly refreshing to see one follow through on that (usually unintended) atmosphere. Suntanned idiots pound cheap beer & skinny-dip in a secluded campsite lake while an 80s pop music soundtrack inanely rattles, “Boys will be boys, that’s how they’ll always be.” The only thing that feels out of place is that the genre’s juvenile fixation on naked breasts is dragged out to an absurd length, to the point where two girls are sensually rubbing suntan lotion on each other’s areolas in a display of true, helpful friendship. This gaggle of horned-up teen idiots are incrementally thinned out by elderly garage mechanics in ski masks, who abduct them in small batches and sell them alive to a nearby “hospital” run by space aliens who trade gold coins for teen blood. The sci-fi costuming of the hospital nursing staff looks like an Atomic Age diner-themed strip club uniform, but the nurses themselves never get in on the lurid sex action enjoyed by the pre-abducted teens (outside some mild lesbian caresses). Instead, they shoot stun gun laser beams out of their space alien finger rings and await orders from the bombshell doctor in charge (Newmar), as if this were a colorized Ed Wood picture instead of a slasher-spoofing “porno horror.” Unfortunately, the two halves of the film, the sex slasher and the retro sci-throwback, never converge with any satisfaction. Instead, the movie is seemingly zapped of all its energy (and budget) midway through and wastes an alarming portion of its runtime in the wicked mechanics’ garage, patiently waiting for the credits to roll.

The first shot of Evils of the Night is an impressive special effects display of a UFO landing in the woods, teasing a grand sci-fi spectacle the movie has no intention to deliver. By the time you realize the entire third act is going to be staged in an unadorned garage, however, it becomes clear that special effects footage was lifted from a better-funded production. Had the sci-fi portion of the film led to the hospital staff’s grotesque practical effects transformations into alien beasts it could have made a substantial mark as a late-right cult film oddity. Instead, it drops the two things that make it notable as a variation on the slasher genre (the aliens and the sex) and concludes with two greasy creeps wielding phallic industrial drills, a display we’ve seen pulled off before (and better) in titles like Slumber Party Massacre & Body Double. It’s almost bizarre enough in that opening, pornographic stretch to make the third act’s doldrums worthwhile, though. Evils of the Night only becomes bland once it stops having sex and starts playing its straight-forward slasher beats as if they were inherently interesting on their own. With a more punched-up conclusion (either through space alien transformations or more lakeside skin-lotioning) it could have been a midnight movie classic. Instead, it’s the kind of midnight movie that starts as perversely thrilling, then puts you to sleep halfway through.