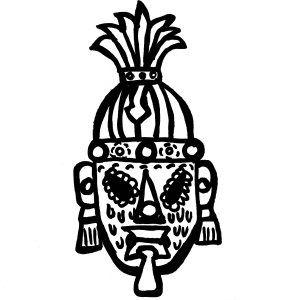 Mardi Gras in New Orleans is many things: cheesy, transcendent, sleazy, cheap, goofy, sinister, magical, communally handmade. Even if it’s spiritually corrupt and technically inept in its filmmaking, the cheap-o horror curio Mardi Gras Massacre is all those things as well. Yes, Mardi Grass Massacre is locally-flavored misogynist trash about a ritualistic serial murderer who targets French Quarter sex workers. It’s also the kinky, near-pornographic New Orleans equivalent of Manos: The Hands of Fate, in that it’s wonderfully, quirkily inept to the point of being Cute despite the repulsive cruelty of its genre. Better yet, all the qualities that make it memorable as a horror novelty are the exact same qualities that make our city-wide masquerade on Fat Tuesday such an extraordinary communal experience year after year, century after century. Unfortunately, 2021’s Carnival season has been completely upended by the ongoing COVID-19 pandemic, leaving a parade float-shaped hole in my heart. I don’t know if it’s just because of my desperate need to experience some semblance of that ritual through the safest means possible, but I was shocked to find some genuine Mardi Gras magic in such a lowly, putrid gutter. It felt great.

The poster for Mardi Gras Massacre sells the movie as if it were a giallo murder mystery, complete with a straight razor weapon that never appears in the actual film. In practice, it’s not a mystery at all. The killer’s identity is immediately apparent, as he plainly introduces himself to a pair of prostitutes at a Bourbon Street drinking hole, asking around for “the most Evil woman” they know. Once he secures a transactional “date” with the most Evil sex worker in the bar, he brings them back to his French Quarter torture dungeon, where he ritualistically removes their organs as a sacrifice to an Aztecan goddess. So much about this murder ritual is viciously amoral & tacky, which does not at all improve the two or three times it’s repeated beat for beat with subsequent victims. From the presentation of Aztecan religious practices as Anton LaVey-styled Satanic pageantry to the eroticized dismemberment of women as if it were a mere S&M kink, Mardi Gras Massacre is repugnant in its social politics – as most 1970s grindhouse horrors are. And, yet, as scope of the film expands outside those bloody dungeon sessions, the movie gradually becomes uniquely adorable in pure N’awlins fashion. Its distinctly 1970s misogyny is entirely overpowered by its distinctly local flavor.

The heroes of this story are a crooked cop and a French Quarter prostitute who form an unlikely love connection, turning the first ritualistic murder into a morbid meet-cute. The cheery pair play tourist on cutesy dates up & down the Riverwalk, inanely grinning at each other as the Natchez rolls by in the background. Before you can get incensed at the cops for being positioned as The Good Guys, however, this romantic fling eventually breaks down as the sex worker starts to resent her pig boyfriend’s sense of superiority over her. She calls him out for being a thief & a predator, and they split up to face the killer by their lonesome. The initial performative misogyny of the murder scenes gradually breaks down in a similar way. As we spend more time away from the dungeon rituals, the movie appears to have a much less Conservative viewpoint on women & sexuality than it initially pretends. The sex worker victims are more fleshed out & humanized than the evil caricature who hunts them down. Gender-ambiguous and flamboyantly queer side characters & extras are presented as matter-of-fact members of the French Quarter community instead of the punchlines you’d expect. Meanwhile, an incessant disco soundtrack constantly reminds the audience that the show is all in good fun. It would be absurd to posit that Mardi Gras Massacre was anything more than amoral sleaze—at least in terms of its political messaging—but it’s at least amoral sleaze that feels authentic to the French Quarter lifestyle once you emerge from the murder dungeon.

Of course, the real draw here is the novelty of the murders’ Mardi Gras setting, which frames the film as an act of regional filmmaking just as much as it is generic 1970s exploitation schlock. For most of the runtime, Carnival season is only as important to the plot as the approach of the 4th of July weekend in Jaws. Occasionally, cops & newspaper men are pressured to stop reporting the sex worker serial murders out of fear that it’ll ruin business during Mardi Gras, scaring away tourists. The climactic ritual is set on Fat Tuesday, however, where the killer feels emboldened to dress in his faux-Aztecan ritual garb in public, letting his freak flag fly among the other pedestrian revelers. I love this candid street footage with all my heart, as it captures the French Quarter masquerading of Fat Tuesday that most movies set here ignore in favor of the St. Charles Ave. float parades. As the on-the-street extras swarm around our costumed, misogynist killer, it’s fascinating just how little that real-life ritual has changed over the last four decades. The haircuts are a little different, but the costumes & the atmosphere are exactly the same. It was a time-warp to the exact blissful chaos of Mardi Gras that I’ve bene missing this year in quarantine, and it could not have come from a less reputable source.

There’s plenty of unsavory New Orleans flavor flowing throughout Mardi Gras Massacre even when it’s not parting its way through the Fat Tuesday crowds. At the very least, the movie is a wonderful guided tour of the Bourbon Street strip club scene of the 1970s, including an extensive novelty act with a dancer costumed as Lucifer. My favorite N’awlins Y’all moment in the entire picture is the shot where cops discover the abandoned body of the first victim near the Riverwalk, then the camera zooms in on the Cafe Du Monde signage lurking in the background. C’est magnifique. You can likely find these same New Orleans touches in far less grotesque regional horrors; The Exotic Ones is a much lighter, sillier equivalent that immediately comes to mind. Still, there’s just something about the lurid colors, the shameless hedonism, and the sinister non-stop partying of Mardi Gras Massacre that really won me over despite my initial misgivings. I did not expect the film to earn the “Mardi Gras” portion of its title, but its gawdy sub-professional ritualism got there in a roundabout, endearing way. The kills are mind-numbingly repetitive & grotesquely amoral, but everything that surrounds them forgives the indulgence, like Wednesday-morning ashes smeared on a hungover reveler’s forehead.