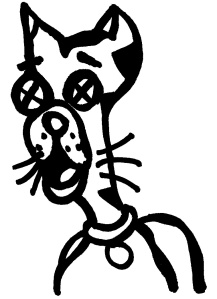 I often use Freddy Got Fingered as a comparison point when describing a certain kind of comedy that relies on depraved, deliberate idiocy to achieve an absurdism that’s paradoxically both anti-intellectual & subversively intelligent. It difficult to convey how so-dumb-it’s-smart comedies like Billy Madison & MacGruber transcend the limitations of their juvenile antics by making them as juvenile as possible, but I always remember Freddy Got Fingered as being the artistic height of that style of humor. That’s not to say that Tom Green necessarily invented any new kid of anarchic depravity never before seen on the big screen in his directorial debut. From Harpo Marx chewing & swallowing a thermometer to Divine eating cops alive at her own birthday party, there’s a wide-ranging cinematic tradition of chaotic troublemakers breaking down social laws of decency & maturity. Still, Freddy Got Fingered has always stood out to me as a unique example within that larger tradition, an easy reference point for aggressively inane, absurdist depravity on the big screen, despite it having been well over a decade since I last revisited it.

Tom Green stars in his own directorial debut as a Tom Greenish hobgoblin. Recalling his own real-life path to unlikely stardom, he is a grotesque, overgrown man-child who still lives at home in his late 20s and struggles to convince the sensible adults around him that his prankish art (not to mention his literal pranks) has any real-world value. In an early moment of heartbreak, a slimy L.A. animation industry executive (Anthony Michael Hall with an Eminem haircut) explains that his amateur comic strips are commercially worthless because nothing happens in them narratively, practically spitting in his face, “It doesn’t make any sense. It’s fucking stupid.” That exchange is more of a mission statement than a self-criticism, as the plotless nonsense that follows doesn’t make any sense and is extremely fucking stupid. There’s a vague story structure adhered to in Freddy Got Fingered where this directionless man-child matures by engaging in romantic relationships, finding alternative routes to commercial success, and mustering the courage to stand up to his bigoted bully of a father (Rip Torn). That narrative progress is barely perceptible under the film’s maddening mountain of inane comedic bits & non-sequiturs, though, which in their own way attempt to update John Waters’s Dreamlanders-era depravity for the 90s mall punk generation.

Although Tom Green’s combative relationship with his father and kinky romance with his paraplegic love interest provide the film with the familiar rhythms of more tightly structured narratives, most of Freddy Got Fingered is a strung-togehter series of grotesque stunts and absurdist gags. Green masturbates large animals while exclaiming nonsensical catchphrases like “Look at me, daddy! I’m a farmer.” He delivers babies in trespassed hospital rooms after medically addressing the mother-to-be’s symptoms with “Oh I see the problem. There seems to be a little baby inside your body,” eventually cutting the umbilical chord with his teeth and pocketing it as a keepsake. He covers himself in roadkill like a mangy dog. He endangers children and sends entire rooms full of respectable adults into chaotic cacophonies. His entire existence is grotesque, gore-soaked performance art. Sometimes there’s a recognizable beauty in the chaos, as in the case of a musical instrument he constructs out of sausages arranged on a complex pulley system, an instillation piece that deserves art museum preservation. More often, though, his antics are an indulgence in truly meaningless violence, expressed directly from his id. It’s an impressive sight in both instances, even when it makes you want to puke.

There’s an underlying tone of #edgy humor to Freddy Got Fingered that hasn’t aged particularly well as we’ve culturally (and thankfully) moved further away from Gen-X moral apathy. Homophobic slurs, jokes about suicide & child molestation, and “ironic” bigotry stick out like sore thumbs in a 2010s context, which can sometimes spoil the mood. At the same time, I laughed so hard for such an extended period of time while watching it that I cried and had a headache. There’s nothing especially novel about saying that Freddy Got Fingered deserves critical reappraisal at this point, as its ever-growing cult following is strong enough that Green has been teasing (threatening?) an extended Director’s Cut of the film for years. Even just seeing Wikipedia list it as a “surrealist black comedy” feels like a kind of well-won victory, as I‘m sure its contemporary descriptors were much less kind. Revisiting the film only confirmed that it really is a standout in the subversively idiotic comedy genre, a type of straight-from-the-id juvenile humor I have a difficult time defining, but find tremendous respect for anyway. Comedy often relies on the challenge to & breaking down of civility. With Freddy Got Fingered, Tom Green cemented his legacy as one of the greats in aggressively causing social havoc. His only contemporaries on that front, really, was the Jackass crew, but judging by the skateboarding footage in this film’s opening credits, the only area where they bested him was in extreme sports. 17 years later, there’s still nothing quite like this perversely idiotic gem.