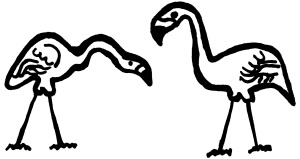 Although it’s the title that’s immediately conjured whenever you mention the name of my favorite filmmaker, I had somehow allowed Pink Flamingos to slip in my estimation over the years. Hairspray may be John Waters’s most popular film (and thus, according to Waters himself, his most subversive), but it’s arguable that Pink Flamingos is his most iconic. If a casual cult movie fan hears John Waters’s name, Pink Flamingos will usually be their go-to reference point, typically followed by an offhand remark about Divine, the greatest drag queen who ever lived, eating dog shit in its infamous epilogue. When I started a Divine-inspired Mardi Gras krewe with fellow Swampflix contributors earlier this year, we relied heavily on the film’s icon status to establish our visual aesthetic; we paraded a flamingo-adorned flag pole and handed out fake piles of shit as our signature throws. Still, my tone when discussing Pink Flamingos has become increasingly dismissive & apologetic in recent years. I love Waters’s films so much (with Desperate Living & Serial Mom being personal favorites) that I feel an ingratiating need to downplay his most monstrously juvenile work’s significance in his ouevre so as not to scare people off from giving his other, less shock value-dependent works a proper chance. After seeing Pink Flamingos‘s trial run predecessor Multiple Maniacs at last year’s New Orleans Film Fest and recently re-watching the trashterpiece on the big screen for the third or fourth time in my life with an appreciatively rowdy crowd at the New Orleans Museum of Modern Art (on my birthday!), I’ve been forced to reassess that apologetic stance. Basically, what I’ve been saying is bullshit. Pink Flamingos is a perfect work of fine art trash cinema, one of the most hilarious comedies ever made.

Much like in Multiple Maniacs, Divine plays herself in a boisterous love letter to her own drag persona. Instead of running an illegal sideshow, however, she’s embroiled in a tabloid-documented war for the title of The Filthiest Person Alive. She has a fairly solid claim to that throne too. Living in a secluded trailer with her two sexual deviant children and her egg-addicted mother (a top-of-her-game Edith Massey), Divine cultivates a kind of Quentin Crisp celebrity; she’s famous for being famous. This infuriates a married couple who are her only true competition for the Filthiest People Alive title, Raymond & Connie Marble (David Lochary & Mink Stole, respectively). The Marbles go out of their way to cultivate a reputation for Filth, forcing hitchhiking teens into slavery & impregnation so they can sell the resulting babies to lesbian couples on the black market. They taunt Divine directly by sending her human shit in the mail & reporting her birthday party celebrations to the police (who the revelers immediately eat & kill, naturally). Eventually, these pretenders to the throne’s “attacks on her divinity” get to be too much for Divine to ignore and the two factions come head to head in a race to see who can execute whom first. Of course, plot is entirely besides the point in this kind of bad taste comedy, which more or less extends the sideshow structure of Multiple Maniacs for a second, more depraved runthrough. Inane conversations about eggs, Divine shoplifting beef under her dress, and even the infamous dogshit conclusion all amount to more than anything that could be considered a plot point. It’s essentially a loosely connected strand of sketch comedy vignettes, a hangout film of the damned.

Waters was still a young, hungry filmmaker where he made Pink Flamingos. You can feel that green, eager-to-shock energy in his need to wear his influences on his sleeve. Movie posters adorn the walls of the Marble home; Russ Meyer’s fetish for classic cars & giant tits are echoed openly at every opportunity; the theme from the Jayne Mansfield film The Girl Can’t Help It soundtracks the shoplifting scene at the deli. Still, Pink Flamingos feels astoundingly ahead of its time considering the hippie-flavored Free Love vibes that dominated most counterculture in the early 70s. Waters’s mean freak proto-punk monstrosities, with their leopard print clothes & brightly dyed hair, are a total anomaly. Sometimes that reverence for exploitation cinema shock value can devolve into an amoral ugliness, such as in a hard-to-watch rape scene that involves the real-life death of a chicken (that the crew reportedly grilled & ate after the shoot) & a cry to free one of the key members of The Manson Family. Mostly, though, the so-called Dreamlander crew’s pre-punk ethos is expressed in transcendently silly, aggressively progressive ways: singing buttholes, go-nowhere diatribes about eggs, trans women flashing the camera, a D.I.Y.-flavored disinterest in formalism or good taste. Every time I see Pink Flamingos projected for an audience there are just as many disgusted walkouts as there are people laughing themselves to tears. As the film will be half a century old in just a few years and Waters’s penchant for Filth has been filtered through the mainstream thanks to decendents like the Jackass crew & the Farrelly Brothers, that’s no small feat. The film is just as funny, filthy, grotesque, and vividly punk now as it’s ever been.

The NOMA screening I recently attended merely just projected the same DVD transfer of Pink Flamingos I own at home (on a significantly smaller screen than where it usually plays at The Prytania). Yet, seeing it with that disgusted/delighted art museum crowd was an essential reminder of exactly how transgressive (and gut-bustingly funny) this nasty slice of trash cinema still feels with a modern audience. I need to stop downplaying its place in the Waters ouevre. Pink Flamingos is damn funny and, if punk still means anything culturally in the 2010s, damn important.