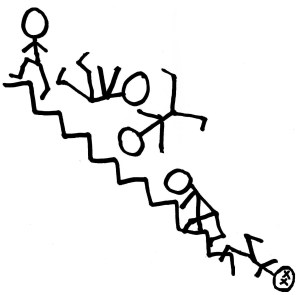 Who doesn’t love a good tumble down the staircase? They’re just so dramatic and over-the-top! I love them so much that I’ve decided to share my Top 5.

1. Death Becomes Her (1992) – Meryl Streep is better than everyone at everything, even falling down the stairs. Although there is more than one scene where her character, Madeline Ashton, takes a dive down a flight of stairs, the first fall takes the cake.

2. Hush…Hush, Sweet Charlotte (1964) – As Velma Cruther (Agnes Moorehead) is being very vocal about ratting out the film’s antagonist to the sheriff, a chair is smashed over her head and down she goes. Should’ve kept that mouth of yours shut, Velma.

(Note: that tumble takes place @1min30sec in that clip, but there are plenty of other great falls included there as well – even some from this list).

3. Kiss of Death (1947) – Ma Rizzo (Mildred Dunnock) is violently pushed down a stairwell in a poorly- constructed wheelchair. The wheelchair is so crappy that it falls apart before making it to the bottom. That poor “lyin’ old hag!”

4. Maternal Instincts (1996) – “Sorry? It’s too late to be sorry!” Delta Burke’s tumble down a set of industrial steps is the highlight of the film.

5. Fried Green Tomatoes (1991) – Ruth Jamison (Mary-Louise Parker) gets kicked down the stairs by her repulsive husband, and while it’s one of the films saddest moments, never has a fall been so graceful!