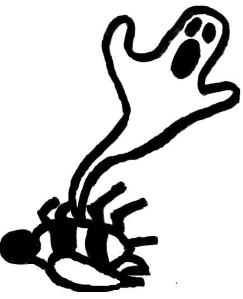 Watching The Spirit of the Beehive for the first time recently, I was struck by how contemporary & effective the film still felt 40 years after its release. Its refusal to tell a complete, lucid story was reminiscent of so many recent art films that I love. What was even more striking was the horror the film found in its obscuration. There was an overwhelming sense of dread that something terrible was sure to happen at every turn, a dread that’s more unsettling than the scariest movie monster or serial slasher, because it could not be seen or completely understood. It’s somehow worse when something catastrophic doesn’t happen in the film, because the dread lives on to the next scene. To help myself better understand the film’s horrific use of ambiguity, I looked back to the film it heavily references: James Whale’s classic Frankenstein, a film 40 years its senior. I also looked to a film 40 years its junior: last year’s Under the Skin, within which director Jonathan Glazer finds his own ambiguous horror, bringing the spirt of The Spirit of the Beehive into his own fresh, unnerving territory.

As an essential part of the classic Universal Monsters era, the 1931 film Frankenstein is a touchstone for horror in cinema. The image of Boris Karloff lumbering around as a pile of sentient dead flesh is beyond iconic. So many of horror’s sub-genres, (with their gross-out creature effects & slow-moving, super strong killers), owe their worlds to the bolted-neck lug. What’s most surprising to me is what influence the film has had on atmospheric horror, particularly The Spirit of the Beehive. Having grown up with the Frankenstein monster’s ugly visage on rubber masks, morning cartoons, a Mel Brooks comedy and Halloween candy, I find that familiarity with the abomination has softened his horrific effect. In fact, I think he’s kinda cute. The film that surrounds him, however, still finds other ways to terrify. The movie’s opening graveyard scene, for instance, is a work of otherworldly terror, mostly due to the effective set design. The sparse set, open sky, and thick, clinging fog feels more akin to Mario Bava’s Planet of the Vampires than it does to Earth. The fact that mysterious men are there to rob graves is only icing on the cake for an already terrifying image. Without familiarity with the source material the reasons why they’re digging up corpses makes the moment even more mysterious. There’s an alien atmosphere at work in images like this graveyard set & the doctor’s laboratory that make the film enduringly unsettling.

Of course, most of Frankenstein is far from the detached ambiguity of 1973’s The Spirit of the Beehive. The doctor’s father, Baron Frankenstein, is the antithesis of ambiguity, stating clearly & loudly what is going on in every moment and providing what I suppose was meant as comic relief & “good sense”. Beehive has no such ambitions of clarity. Instead of being a direct spiritual descendent of Frankenstein, Beehive stretches the uncertainty & terror of the opening graveyard scene across its entire run time. It communicates its unease through its imagery, some of which is borrowed directly from Frankenstein. The film opens with children watching the horror classic in awe & discussing fantasies about the monster’s “spirit” afterwards. There’s also a very similar search party scene shared between both films, both feature characters left mute by trauma, and Karloff’s monster himself makes a cameo during one of Beehive’s more bizarre moments. The most significant aspect Beehive borrows from Frankenstein, however, is the foreboding sense of children in danger. In Frankenstein, there’s a scene where the monster picks flowers with a little girl at the side of a lake, only to mistakenly drown her. The two young female protagonists of The Spirit of the Beehive obsess over this scene afterwards, and discuss the monster & his “spirit” at length. Mimicking this moment almost endlessly, it feels as if there’s a constant threat on the children’s lives (whether they’ll be hit by a train, murdered by a stranger, drowned in a well, etc.) that’s communicated solely through the film’s tense imagery. It turns out that something awful already had happened to the girls: they had been uprooted & displaced by a civil war that stresses & complicates their home life, but is never referred to directly. All of the film’s conflicts are conveyed silently and it’s a silence that tyrannizes the central family & distresses the audience.

Silence & ambiguity are also the channels through which Under the Skin terrifies. Obfuscating the narrative of its source material, Glazer’s sci-fi horror leaves the identity, intentions, and even species of its protagonist up for question as she flirts with Scottish men and lures them back to her apartment. Unlike with Beehive, the violence suggested in Under the Skin’s overwhelming dread is delivered on screen. The unnamed protagonist, played by Scarlett Johansson, is more like Frankenstein’s monster in this way, as opposed to the civil war & familial unrest that plagues The Spirit of the Beehive. Instead of drowning & strangling, however, she lures her victims into a mysterious black liquid that somehow dissolves their bodies in a frightening, confounding spectacle. Under the Skin’s inclination for on-screen horror, no matter how alien, distances the film from being a direct spiritual descendent of Beehive, the same way Beehive’s brand of horror is distanced from Frankenstein’s. It does, however, employ a similar mystique & cryptic atmosphere that makes the film all the more terrifying than if Glazer had made a more literal adaptation of the novel by the same name.

Both Under the Skin & The Spirit of the Beehive reach beyond the typical ways a movie can terrify, beyond the methods pioneered by classic monster movies like Frankenstein. They achieve a transcendental beauty in images like Beehive’s honeycomb lighting & endless doorways and Under The Skin’s liquid void & free-floating flesh. It’s a terrifying beauty, though, as it is a beauty of the unknown. Both films are transfixing, yet horrifying, because they cannot be truly, completely understood, like the graveyard landscape at the beginning of Frankenstein. For the more than 80 years since mysterious men were curiously robbing graves on that foggy, otherworldly set, ambiguity and obscuration have been used to terrify audiences in countless films. The three mentioned here are mere steppingstones in the evolution of cryptic, atmospheric horror, perhaps only loosely connected to one another in terms of genre, but connected all the same in a hauntingly vague, undead spirit.