This past Saturday was the annual turning point for me when Mardi Gras stops being a vague concept I hear about on the radio & Facebook feeds and becomes an experience I’m living. Although the Phunny Phorty Phellows’ annual streetcar ride on Twelfth Night is the official start to Carnival season, it’s one I typically miss. Mardi Gras never feels real until I’m finally misbehaving in the thick of it & Krewe du Vieux is my usual starting point for the revelry, but I missed that parade this year as well. 2015’s Chewbacchus celebration was that magical moment when everything clicked and I thought “This is it. This is Mardi Gras.”

The Intergalactic Krewe of Chewbacchus is a relatively young parade that rolls hand-made, people-powered contraptions through the French Quarter & Marigny while the larger, gas-powered floats roll elsewhere across town. Although their nerdy umbrella has expanded to include all kinds of sci-fi goofiness, they’re the only parade I can think of that’s specifically designed to celebrate a movie franchise: Star Wars. Despite the inclusion of other sci-fi properties like Doctor Who, Star Trek, E.T. and (most recently) Guardians of the Galaxy, it’s still a mostly Star Wars-themed affair, one that lauds the “drunken Wookie” Chewbacca as its monarch. Real-life Chewbacca Peter Mayhew himself has even lorded over the parade the past couple of years, revelers treating him like nerdy royalty. The parade’s haphazard, DIY aesthetic perfectly matches the DIY practical effects of the original Star Wars trilogy. Star Wars’ endless parade of odd-looking weirdos and handmade sets & costumes serves as a fitting platform for New Orleans’ own endless parade of odd-looking weirdos & their personal creations, even if they’ve come to incorporate other fandoms as the years march on.

Wasting away a drunken afternoon in the Quarter and then capping off the night with Chewbacchus’ Imperial Stormtroopers & Jedi Knights was my personal introduction to the 2015 Carnival season. It was a great feeling to ring in my favorite time of the year while celebrating one of my other favorite activities: watching movies. Here are a few pics to help solidify the memory. 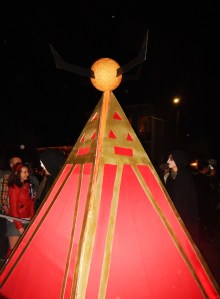 Have a great, safe Mardi Gras, y’all! And may the Force be etc, etc.

One thought on “Carnival Revelry: The Intergalactic Krewe of Chewbacchus in 2015”