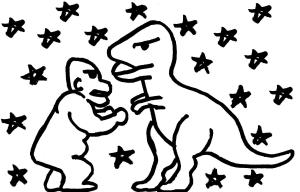 Following a day of Mardi Gras festivities and sustained alcohol consumption, I found myself mindlessly channel surfing through the wasteland of basic cable when an image of a neon green dinosaur battling a blue gorilla in outer space exploded on to the screen, convincing me that someone had spiked my PBR with a large dose of acid. I sat mesmerized but perplexed as the seizure-inducing images of The Adventure of Hercules continued to wash over me. In a flash it was over, like a fever dream implanted by some extraterrestrial life force, but the after effects were strong.

Combining science fiction with a very loose interpretation of Greek Mythology, the sequel to 1983’s Hercules stars the original Incredible Hulk Lou Ferrigno as the titular god who must rescue seven thunder bolts from a group of renegade gods in a plot so preposterous that it takes 26 lines of text to summarize it on Wikipedia. The Adventures of Hercules begins with a ridiculous, almost 8 minute long prelude that consists of flashbacks to the original film, including fights with various robot animals and a magical chariot ride through space. It also features a concise retelling of the formation of the universe and still somehow manages to sustain that insane tone throughout the rest of the film. The movies’s strange, hyper-kinetic images and bombastic trippiness will make many viewers reach for the nearest bong.

We are also treated to cheap CGI that must have looked dated even in 1985, an extreme overuse of neon, unnecessary screen swipes (I counted three in 30 seconds during one scene), and the kind of bad dialogue you would expect from a movie whose lead actor can barely speak English. But that only scratches the surface of the insanity found in The Adventures of Hercules. There’s also fire monsters, slime creatures, ice swords, a Medusa cameo, and nonsensically psychedelic journeys through space and time. A hidden gem for camp lovers, The Adventures of Hercules is the cinematic equivalent of a bong rip. Woah, dude!

One thought on “The Adventures of Hercules (1985)”