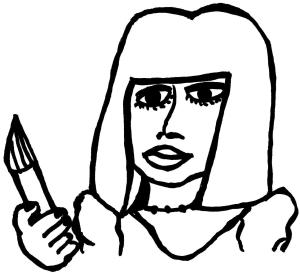 In our coverage of Ken Russell’s acidic sex farce Crimes of Passion, there’s been a very essential bait & switch that we have not yet touched upon. In our Swampchat discussion of the film we claimed that its central message was almost entirely restricted to the simple idea that monogamy = bad. Upon further reflection, I think that might be a little disingenuous, as it doesn’t entirely account for the relationships formed between the film’s three central characters: fashion-designer-by-day-prostitute-by-night Joanna Crane/China Blue, adulterous private investigator Bobby Grady, and type-casted-Anthony-Perkins-psycho Rev. Peter Shayne. When viewed as a group, this unlikely trio reveals that Russell had a little more on his mind than just tearing down heterosexual monogamy through satirical pop music & tawdry sex jokes. He also had another target in mind: masculine romantic entitlement.

If you’re going to make the case that monogamy is not the film’s main villainous conflict (although it almost certainly is), that leaves Anthony Perkins’ reverend, with his amyl nitrite-fueled sermons & killer vibrators, to fill the role as antagonist. Indeed, Reverend Peter Shayne does fill the role of blood-thirsty villain quite well, acting almost as a sex-obsessed Jason Voorhees or Michael Myers. In his obsessive stalking of sex worker China Blue, Rev. Shayne invades her personal space, questions her self-esteem & moral fortitude, and although he doesn’t know her beyond a few brief encounters, claims that he knows her more than anyone else, going so far as to say “I am you.” The subversion at work here is that Rev. Shayne is not the same as China Blue, as he suggests, but rather is the same as Bobby Grady. Bobby also invades Joanna’s personal space, spying on her at work & showing up unwanted at her apartment, just as the reverend does. He calls into question her self-worth & sense of morality, shaming her into leaving the sex trade, something she clearly has fun doing. He even claims that the two of them belong together after one passionate, but brief sexual tryst that instantly sours their relationship. Despite what the Rev. Shayne suggests, he is not the same as China Blue. He’s just a more honest & straight-forward Bobby Grady. While Shayne poses his obsession with China Blue as religious piety, Grady conceals his own emotional manipulation & sense of entitlement under the guise of “true love”. Either way you slice it, they’re the same threat to her self-worth & happiness.

The thing is that the Blue-Grady-Shayne love triangle is not a separate conflict from Crimes of Passion’s fear of the evils of monogamy. In fact, it’s just a more honed-in aspect of the same idea. The reason that heterosexual monogamy is bad (according to the film anyway), is that entitled, inflated, fragile male egos like Rev. Shayne’s & Bobby Grady’s are not content to merely spend time & connect with the Joanna Cranes & China Blues of the world. Instead, they feel a need to possess & claim them for their own individual purposes. Two sides of the same monster, Shayne & Grady are the idea of masculine romance personified & skewered. There is a feminine side to the Crimes of Passion’s monogamy-bashing, like in Mrs. Grady’s eternal grumpiness & Joanna’s self-hatred, but it’s the masculine possessiveness of Shayne & Grady that turn something as sweet & fun as sex into something sour & destructive. In other words, their passion for China Blue is a crime in itself.

For more on May’s Movie of the Month, 1984’s Crimes of Passion, visit our Swampchat, our list of tawdry sex jokes from the film, and last week’s note on the film’s maddeningly repetitive soundtrack.