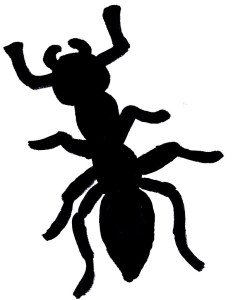 When I was a kid, I had a deep and abiding fondness for any film or movie property that featured small people finding novel uses for normal-sized implements. I voraciously read The Borrowers and the sequels to it that my local library happened to have, and I have clear memories of the television series The Littles airing in the mornings before kindergarten, although I’m sure it was well into syndication by then. My absolute favorite, however, was always Honey, I Shrunk the Kids, with its theme park-esque magnification of the trials and travails of one’s own backyard (including one particularly nasty scorpion, which I have no doubt instilled a phobia of the arachnid in an entire generation of children, myself included). Ant-Man has many moments that directly reminded me of sequences in Honey. Part of that might be that the Alamo Drafthouses specialize in editing together interesting footage tangentially related to the film being screened, and my nostalgia goggles were primed due to the inclusion of the scene from Honey in which the Szalinski’s daughter first befriends Anty; moreover, Ant-Man takes pleasure in revisiting the magic of the ant’s eye view. Overall, it’s a fun ride.

Comedy staple Paul Rudd stars as Scott Lang, a recently released ex-con who was incarcerated after hacking into a corporation’s computer system in order to refund millions that were acquired through overcharging customers. His primary goal now is to once again become a part of the life of his young daughter Cassie (Abby Ryder Fortson; fellow Young Avengers fans know Cassie as the future Stature). In order to do so, Scott has to convince his ex-wife Maggie (Judy Greer, reduced here to playing “somebody’s mom/ex-wife” as she so undeservedly often is; see also: Jurassic World) that he’s capable of handling that kind of responsibility. Complicating matters is Paxton (Bobby Canavale), a San Francisco detective and Maggie’s new fiancé. At the core, this is a pretty domestic story. You’ve probably seen that movie before; I know I have. That’s where the super-science comes in.

In 1989, Hank Pym (Michael Douglas), creator and original occupant of the Ant-Man suit, walked away from S.H.I.E.L.D. in the hopes of preventing them from weaponizing the technology to create an army of insect-sized soldiers. Now, several years deep into retirement, Pym is back to prevent his unbalanced former protégé (Corey Stoll), who has recreated his technology and foresees its potential use as a weapon both for the military and for suppressing civilian protest and dissent, from auctioning his “Yellowjacket” technology to the highest bidder. While Scott is unable to find gainful employment due to his past conviction, Hank sets a plan in motion to enlist Scott’s burgling skills to infiltrate his old company and destroy the Yellowjacket project before S.H.I.E.L.D.–or HYDRA–can get their hands on it.

There are a lot of pleasant surprises here, but first: the negatives. I still think it’s absurd that we’ve gotten an Ant-Man movie before a Black Widow feature, and it’s telling that the bare-bones recap above doesn’t mention Luis (Michael Peña) or Hope van Dyne (Evangeline Lilly), both of whom play ostensibly major roles in the film but who can be excised from a plot summary without losing significant detail. If the final battle between Ant-Man and Yellowjacket seems familiar, that’s probably because it’s incredibly similar to the final battle from the first Iron Man: two men in similarly powered suits fight each other, and the hero defeats the bald, progressively less sane villain using his superior knowledge of the suit’s technology and that technology’s limitations. It’s a bit of a retread of other movies, both within and without the Marvel Universe, right down to the way that Hope eventually falls for Scott—not that I can blame her. I mean, have you ever looked at Paul Rudd’s eyes? He’s a dreamboat.

My initial skepticism about this movie mirrored my early skepticism for Guardians of the Galaxy: “Sure, expand the scope of the franchise–but why this property?” Ant-Man couldn’t possible live up to the standard of a movie that turned schlubby everyman Chris Pratt into a legitimate movie star, but the hype for Rudd’s vehicle doesn’t oversell the inarguably fun, likable, watchable movie that Ant-Man is. As a CGI-heavy flick, it had the potential to look like computer generated garbage (again, see also: Jurassic World), but at no point did the imagery take me out of the moment the way other recent movies have. Although Lilly is underutilized, the groundwork for her larger future involvement in the franchise is laid well (comic book fans will probably guess in what capacity, but I won’t spoil that here), and Peña works well as a character suited both for comic relief and surprising heroism. An extended cameo from the Falcon (Anthony Mackie) seems somewhat tacked on, but does well to remind us that this relatively grounded entry in the Marvel Cinematic Universe is still part of a larger narrative, and Mackie is always a welcome screen presence. Unlike gloating trillionaire Tony Stark, Scott Lang is a much more identifiable, sympathetic, and likable character, which makes for a more interesting and compelling character. And, as cited above, the sequences that feature tiny Scott navigating the normal world, but magnified, are a treasure—Scott flying around on the back of his flying ant steed, Antony, was a particular highlight.

And, I’ll go out on a limb to hang myself here, Ant-Man was a better movie than Age of Ultron was. The second Avengers movie was never going to be able to recreate the magic of the first, because the novelty of seeing heroes team up had, if not “worn off,” at least dulled. AoU suffered from too many characters and a plot that was more interesting in theory than in practice, and the studio-mandated trimming of certain storylines left the film feeling sloppy and unrefined in many places. Ant-Man, on the other hand, makes for a much more satisfying film by grounding itself with realistic and relatable character arcs for most of the main cast and focusing on one major event, the heist, instead of over-inundating the audience with by attempting to create an endless series of “Wow” moments. It’s not the best of the Marvel franchise, but it is the best of 2015, and I’m more excited to see what lies ahead for Ant-Man than I am for other, more popular MCU characters.