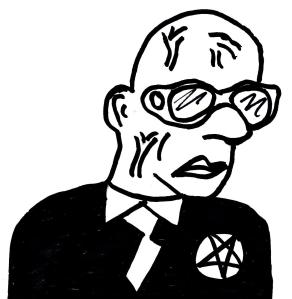 I know that we lightly touched on the fact that both Ben and Jerry Stiller made appearances in our discussion of July’s Movie of the Month, Highway to Hell, but I recently found out that two other members of the Stiller family were in the film: Ann Meara (Jerry’s wife/Ben’s mother) and Amy Stiller (Jerry’s daughter/Ben’s sister). The family members have appeared in multiple films with one another (Heavy Weights, Zoolander, etc.), but I can’t think of any other film that has four Stillers in it at the same time. What exactly happened here? Did Jerry beg the casting crew to allow his wife and kids to tag along? Was Jerry even the first member casted? Highway to Hell has a special connection to the bizarre Stiller family, and I’m determined to find out why.

Ben Stiller was given not one, but two small roles in Highway to Hell: a demented fry cook at Hell’s only diner (Pluto’s) and Attila the Hun. I have to say, this really shows off his versatility as an actor. Prior to this film, he had a pretty short acting resumé with a couple of minor television/film appearances, so I think it’s safe to say that Ben wasn’t the first of the Stiller’s to join the Highway to Hell cast. The same goes for Amy. She only appeared in a couple of movies prior to her forgettable performance as Cleopatra in Highway to Hell.

Now, Ma and Pa Stiller are a completely different story. Jerry Stiller and Ann Meara both had lengthy careers as comedians at this point, and after all, Highway to Hell was a horror/comedy. In the film, Jerry is a cop that sits in Pluto’s waiting for a cup of coffee he will never get, and Ann is the diner’s waitress that will never fill up his cup. It was like one of their classic skits on the The Ed Sullivan Show, except it was terrible and not really funny.

My official conclusion is that Jerry and Ann’s career as variety show comedians and sitcom stars was dwindling down. They needed money and their kids needed acting experience, and lucky for them, Highway to Hell needed cheap actors. It was probably like some sort of buy one et one free deal. Sadly, the film was a flop and no fame or fortune was attained by the Stiller clan.