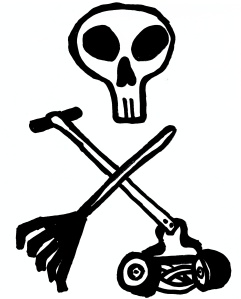 I first became aware of the ridiculously titled The Love Butcher when the crew over at RedLetterMedia planned to watch it for one of their Best of the Worsts specials, only to discover that the tape in their possession was damaged and unwatchable. A week later, the Alamo announced its Weird Wednesday line-up for the month of October, and Butcher was the revealed as the month’s first screening. A forgotten oddity, the 1975 proto-slasher focuses on the the split personality of physically handicapped Caleb and his suave, handsome, murderous alter ego Lester.

Caleb (Erik Stern) is a gardener referred to by many of his beautiful but insensitive clients as “a cripple,” due to his malformed left hand, clubfoot, and coke bottle glasses. Bald and with perpetually gross bits of black gunk on his teeth, Caleb shares a shack with his brother, Lester. Caleb failed to protect Lester from some terrible event when they were children, leading Caleb to be haunted by his own psyche; Lester is in reality only a figment of Caleb’s warped mind, one who sometimes takes over Caleb’s body (and dons a wig) to murder the “sluts” who populate their town. Meanwhile, journalist Russell Wilson (Jeremiah Beecher, in his only film role) first antagonizes the police and then works with them to track down the murderer, much to the chagrin of both the perpetually annoyed Captain Stark (Richard Kennedy) and Wilson’s long-suffering girlfriend, Florence (Kay Neer, also in her only film role), who has grown increasingly weary of his unpredictable newspaperman hours.

Of all Caleb’s clients, Florence is the one who treats him best. The first victim that we see is a woman who gives him a hard time for asking for water then suddenly turning into a sly seductress when asking if Caleb can recommend an AC repairman; he “sends” Lester, who murders her. Lester also seduces and then murders a Texan expat (Eve Mac, also in her only film role; sensing a pattern here?) whose irritation at Caleb for placing a lawn sprinkler right outside of her window and spilling manure everywhere is actually fairly reasonable, up until the point that she starts berating him for being a freak. All throughout, Lester goes into hysterical diatribes that feature some of the most outlandishly misogynistic dialogue ever uttered on screen, so blatantly and outrageously sexist that it cannot possibly have been meant to be taken seriously. Lester blames the women of the world—all of them, including the boys’ own dead mother—for literally draining the life force out of men through sex. Not all of his victims are so cruel, however; the woman with whom he shares the screen for the longest time, Sheila (Robin Sherwood, who also appeared in Blow Out and Death Wish 2, so, hey, good for her) is the sweet young wife of a dickish older husband who withholds sex from her and berates her musical choices while also demanding his Ovaltine. Sheila asks Caleb to take some time off because she’s not comfortable being alone with a man while her husband is out of town on business, and when Lester approaches her as a record salesman, she spurns his sexual advances. Her only real crime is being too naive; she recognizes Lester in his second disguise when he comes to repair her plumbing but still lets him into the house. What?

The police can’t figure out who the killer is, despite the fact that virtually all of the murders are committed with gardening tools and in a single neighborhood, against a group of women who all have the same gardener (whoever could the killer be?!). Florence is so kind as to invite Caleb into her home for lunch, a gesture that it seems no one has ever shown him before. Lester is infuriated by this person who doesn’t jibe with his conception of women, so he sets out to seduce Flo, only to be spurned by her on the evening that Russell has finally proposed. This somehow allows Caleb to finally overcome Lester and realize that it was Caleb, not Lester, who died when they were children, and that Lester took on the affectations of being Caleb because Caleb was their mother’s favorite. On screen, it’s much less confusing than it sounds.

The film’s first cut was directed by Mikel Angel, who also co-wrote the script. Initially more of a straightforward exploitation movie, Don Jones (whose directing career began with the luridly titled Schoolgirls in Chains and ended with Molly and the Ghost, which doesn’t sound so bad until you see the cover) was tasked with recutting the film into something more comedic. Instead of the hodgepodge film you would expect from such a cobbled together affair, Butcher is fairly straightforward in its brief 82 minute run time, although I suspect that earlier versions of the film featured more of Captain Stark and the reporter investigating, as their combined screen time in the finished product in comparison to Stern’s elegantly delivered monologues is so minimal as to seem almost superfluous. These monologues have to be seen to be believed; imagine Dandy from American Horror Story: Freak Show, but as played by someone with a real hunger for scenery that manages to deftly tread the line between camp and menace rather than just crossing back and forth over it. Some great lines include “I’m the great male Adonis of the universe!” (which, frankly, he isn’t too far off the mark, because damn) and “You’re going to make love to me; satiate me, fill me with nymphoid satisfaction. Drain me, and then you’ll lie at the foot of my altar and adore my godly beauty.”

Lester’s overly verbose and surprisingly sophisticated rants manage to be at once menacing and hilarious, and it’s a testament to the late Erik Stern’s acting that they work at all. For a performance in a movie with no pretensions about being anything other than schlockbait, Stern really commits to his dual role, and to the various other roles and disguises Lester dons in his murdercapades; “Buck” is a treasure, as is the British plumber, although his brown-faced Puerto Rican record salesman disguise is a little uncomfortable (not to mention, what was he going to do if he successfully seduced Sheila on this first attempt and his body had a completely different fleshtone from his face?). Stern brings a pronounced, theatrical-but-understated physicality to the role, crafting very different screen presences for Caleb and Lester, to the extent that you may actually find yourself forgetting that it’s a dual role. There was real potential and talent there; perusing the list of one-shot TV guest appearances that make up the bulk of his career saddened me because he actually could have gone pretty far as an actor but he never caught the break he needed.

This is a fun, and funny, movie. In much the same way that Tristram Shandy satirized the novel as a form despite being one of the first ten or so novels in the Western world, The Love Butcher mocks, subverts, and emulates the slasher despite having been conceived when that concept was only beginning to solidify. It’s an exploitation film that will use a cartoon sound effect when an older man shows off his bicep in one scene and then have a woman beaten to death with a sharp rake in the next. One scene may show Stern as Caleb having a discussion with “Lester,” personified as Lester’s wig on a styrofoam head—with a lit cigar in its “mouth”; in the next, Stern may be wringing a surprising amount of pathos out of being apprehended just after Caleb finally wrests control from Lester permanently, mewlingly pleading with the police to understand that Lester had done all those horrible things. It’s a movie that demands to be seen.