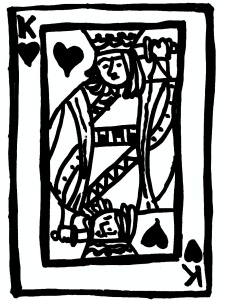 Roughly ten to fifteen years ago, poker was everywhere. The boom of internet-based video poker played a huge role in the game’s rising profile, and as more people got to experience the game and hone their skills in a low-risk environment, suddenly everyone was an expert. The World Series of Poker became must-see television, or else you would be left out of the watercooler conversation the next day; at night, USA Network would force teenagers across the country to wait an interminable thirty minutes to see Strip Poker contestants in their underwear. If you could poker-ify a product, you could sell it, as obsession with the card game brought poker to a point of cultural saturation that normally only your Seinfelds and your Cosbys get to enjoy. It’s not hard to imagine why; poker is like the lovechild of lottery and sport, allowing players (and viewers, by proxy) to experience the pure adrenaline thrill of wagering on something that combines strategy with luck. Like all fads, it eventually faded away, but not before several filmmakers tried to herd gullible people into theatres by making poker a focal point; search Google for “movies about poker,” and you’ll see that most of the results come from 2003-2008. For better or worse, Dario Argento was one of those directors.

The script that would eventually become Il cartaio (The Card Player, 2004) began as an idea about a sadist challenging the police to a game of poker. He also envisioned the film as a sequel to The Stendhal Syndrome, revisiting Inspector Anna Manni (presumably rehabilitated following her psychotic break in that film). When his daughter was not available to reprise her role, Argento reworked the script; since I went into this film with that knowledge, it’s impossible for me to say how much of the narrative is a holdover from its previous incarnation and how much of it merely seems that way because I was subconsciously looking for connections, but those apparent connections, be they real or imagined, fail to make this a standout film. Despite some new ideas, The Card Player feels as if it was dated from the moment of its release, and often plays more like a television procedural than a movie from one of the great living directors.

Inspector Anna Mari (Stefania Rocca) is an investigator who believes in healthy living and keeping her personal and professional lives separate, much to the chagrin of Carlo Sturni (Claudio Santamaria), a fellow officer. Mari begins to receive messages from a serial killer known as the Card Player, who challenges the department to a game of online video poker with the prize being the life of a young woman who is hooked up to a live feed, to be killed or freed, depending on whether or not the police can beat him in three hands. The police commissioner (Adalberto Maria Merli) initially refuses to play along, and the first victim is a British tourist whose murder brings in Irish-born London-detective-in-exile John Brennan (Liam Cunningham, aka Ser Davos the Onion Knight of Game of Thrones). The killer’s second victim dies when Sturni fails to beat the killer’s hand, and Brennan and Mari’s investigation brings them to young student Remo (Silvio Muccino), a poker prodigy whom Mari enlists to help them win against the murderer, or at least keep him online long enough to track. The third victim almost escapes uring the game, but is recaptured and killed. Meanwhile, Mari staves off a home invasion by the killer, which leads to her becoming romantically entangled with Brennan. then the fourth victim turns out to be the commissioner’s daughter (Fiore Argento), can she be saved in time?

The biggest problem with Cartaio is that it’s toothless and small. A contemporary New York Times review dismissively compared the film to CSI, but its focus on a culturally ubiquitous fad reminded me more of one of those tone deaf and out-of-touch episodes of Law & Order, where they try to tackle something like Bronies or Gamergate and completely fail to grasp it as a concept. Aside from Mari, who comes across as vulnerable but competent and self-assured, the characters are flat, and any personality they have is painted in the broadest of strokes. Cunningham tries his best to breathe life into the paper-thin alcoholic disgraced cop cliché with which he’s saddled, but there was only so much he could do with what was on the page. The other cops are virtually indistinguishable from one another, and it’s a testament to how irrelevant the characters are that the actor behind the killer isn’t even credited on the movie’s Wikipedia page. It’s a big step back from the best thing about Sleepless, which is a shame.

The film is not without its merits, however. As mentioned above, Rocca’s Mari leaves a distinct impression, and the sequence that revolves around her fending off the killer in her home is a tense one that calls to mind a similar sequence in Terence Young’s Wait Until Dark, in which blind Audrey Hepburn extinguishes all the lights in her home and puts herself and an invader on equal footing on her terms. Muccino’s Remo is also a likable screen presence, which makes his sudden death (as well as Brennan’s) all the more shocking. That’s not to say that I would have made the same storytelling choices, but it is an effectively sudden change after the first 70% of the film’s murders were displayed in a more distanced fashion, from the other side of a small chat window (again contributing to the film’s sanitized, crime-procedural aesthetic).

Overall, the lukewarm critical response to Cartaio is commensurate to its reheated plot. There’s nothing novel about the motivations of any of the characters, and making video poker the central focus of originality in the film was a mistake. The musical composition is simply terrible in places, and even the characters agree, as Mari eventually shoots and destroys a car stereo that has been playing the electronica score diegetically (you can get a taste of it in the film’s horrible, dialogue-free trailer; now imagine that playing in roughly half of a two hour movie). The romance between Mari and Brennan feels forced, and the plot reveal of “yeah, he’s dead, but she’s pregnant now, so hooray!” is trite and reductive. Sure, the ending, in which the killer chains both himself and Mari to train tracks and forces her to play very slow video poker to save her life, makes sense thematically. That still wouldn’t make for an exciting climax to an episode of the kinds of shows that Cartaio cribs from, let alone a feature. It’s not the worst Argento, but it doesn’t hover very far above the bottom either.