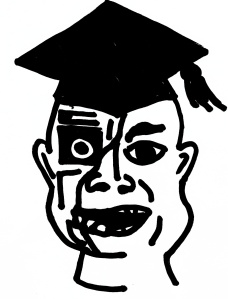 Five years before our November Movie of the Month, Class of 1999, was released in America, Future Schlock, a similarly-minded low-budget dystopian fantasy film, was released in Australia. Class of 1999 is far superior to Future Schlock in terms of quality & cultural shelf-life, but its all too easy to see echoes of the near-future class politics of 1999 in its Australian new wave punk predecessor. Both films only managed to recoup half of their respective budgets in their lackluster theater runs, but there’s no denying that Class of 1999‘s $5 million price tag afforded it a generous head start that Future Schlock‘s comparatively minuscule $½ million couldn’t compete with. That may account for a lot of Class of 1999‘s staying power in terms of cult classic potential, but there’s plenty of fascinating, shabby ideas at play in Future Schlock that make for an interesting watch, however flawed, especially when you’re coming fresh from Class of 1999‘s similarly-oriented dystopian charms.

Class of 1999 predicts a ten-years-down-the-line cyberfuture in which unruly Reagan-era youth have become such a menace that entire sectors of Seattle have been ceded to them in order to protect the law-abiding adults that live in surrounding suburban areas. Future Schlock looks slightly further into the future, say 15 years, warning of The Middle Class Revolt of 1990 that leaves Melbourne legally segregated by oppressively rigid class lines. Similarly inspired by the fallout of Reaganomics, Future Schlock forecasts a period of class stasis after the revolt in which upward mobility has been eliminated & suburban mediocrity is mandatory by law. Much like the walled-in, teen-run free fire zones of Class of 1999, Melbourne’s working class community is imprisoned in an inner-city ghetto where police beatings are not only routine, but officially encouraged and the ruling middle class suburbanites visit to gawk, as if entertained by animals in a zoo. As bleak as all that sounds, there’s actually a great deal of irreverent comedy that overpowers any of the film’s doomsaying politics, the same as it does in the much superior Class of 1999.

Part of what feels so off about Future Schlock‘s quality as a finished product is that its central narrative is decidedly loose. Class of 1999 tells a clear story about rival teen gangs, The Razorheads & The Blackhearts, banding together to destroy their murderous teacherbots (or “tactical education units”) in order to prevent their impending mutual demise. Future Schlock is more of a chaotic collection of comedic sketches meant to flesh out the film’s central, high-concept premise, held together as a single story only by a documentary-style narration track. In the worst of the film’s segments a pair of violent police officers track down infamous, ghetto-imprisoned bandits with the aliases Cisco Kid & Sancho Panza. The cops are belittled for being fruitcakes & pansies in an unwelcome reminder of just how ultra-macho & backwards the 1980s could be, apparently even in the era’s punk rock cinema. Slightly better are segments that follow Cisco Kid & Sancho Panza’s true selves, Sarah & Bear, a pair of new wave punk performance artists who perform songs with lyrics like “Everybody, fuck ’em. Fuck ’em, everyone,” nightly in a ghetto cabaret. As their bandit alter-egos, Sarah & Bear go undercover to freak out the milquetoast suburban normals, but they’re honestly much more interesting when they’re performing synth pop songs of protest to drunken, ghetto revelers as the crowd cheers loudly, performs public cunnilingus, and just generally establishes that their sloppy punk ways are more far more enticing than the dull tidiness of middle class suburbia.

The problem is that we don’t see nearly enough of that middle class mediocrity to draw a proper distinction between that world & the punk ghetto alternative. Much like with Class of 1999, a lot of Future Schlock‘s best moments happen in the classroom, where the film establishes how its laws of mandatory conformity, detailed in “The Standard Set of Middle Class Guidelines” are passed down to the brainwashed youth. Of course, the youth in Future Schlock are much more docile & subdued than the machine gun-wielding teens in Class of 1999, but the way their education system is set up to break their spirits & dull their personalities is very similar in tactic. Honestly, I just wish there was more of that perspective of what a mandatory milquetoast society would be like. There wasn’t much insight into how the suburban areas outside of Class of 1999‘s teen-run free fire zones would operate on a daily basis, but I assumed they hadn’t changed too much since the youngster takeover, so that wasn’t too big of a deal. In Future Schlock, on the other hand, a lot of time wasted on the peculiarities of Sarah & Bear’s sexual habits & homophobic humor aimed at the ghetto’s abusive cops could’ve been pointed at exploring what suburban Melbourne would look like in this particular, dystopian future after The Middle Class Revolt of 1990.

Ultimately, it doesn’t make too much sense at this point to complain about how much better Future Schlock could’ve been with a bigger budget & some thematic tweaking. The film is more or less inconsequential in its current, forgotten state, of interest only for fleeting moments of absurd brilliance & for its context in terms of how it relates to Class of 1999, which I will vehemently contend deserves more traction as a cult classic than it gets. In the spirit of celebrating Future Schlock‘s highlights instead of mulling over its obvious flaws, I’m going to conclude this piece with a transcription one of the film’s best moments: a revised Australian national anthem, updated for the nightmarish suburban middle class state detailed in the film’s opening classroom scene. Along with Sarah & Bear’s aforementioned “Fuck ’em” anthem, it’s a moment that shines as a standalone piece of high art, one that almost justifies the rest of the film’s wasted potential:

“Australia’s sons, let us rejoice, for we are middle class. We’ve golden soil and sun tan oil. Our home is girt by grass. Our land is drowned in swimming pools. The barbie’s over there. The Carlton Light and cask of white are in the frigidaire. A pie and sauce, a winning horse. T.V. and easy chair. Australia’s homes are brick veneer. We own a Betamax. We’ve Commodores and sliding doors. We cheat a bit on tax. A microwave and Magimix. A dishwasher as well. We’re good at golf. Three cheers for Rolf! We’re in the R.S.L. At Christmas time we choose our gifts from Myers and K-Tel. Of course, we all like Chinese food and own a caravan. Electrolux and flying ducks. A non-stick frying pan. K-Mart’s our fashion saving place. The shopping mall’s our shrine. Our homes are clean. We drink Ben Ean while watching channel 9. I’m sure the neighbours would approve. Their taste’s the same as mine.”

Beautiful stuff. Brings a tear to my suburban eye.

For more on November’s Movie of the Month, 1989’s Class of 1999, check out our Swampchat discussion of the film & our look at the diminished returns depths of its shoddy sequel.