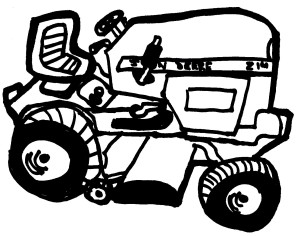 I’ve been intrigued with The Straight Story for a while. It’s the only David Lynch movie to get a G rating from the MPAA and  the only one to be released by Walt Disney Pictures. It’s also based off a true story, which is interesting in its own way. I’m a big fan of the worlds Lynch creates. They’re weird, eerie, and usually unsettling. I thought maybe Disney didn’t realize what they were releasing, that maybe it’s a strange hidden jewel.

Instead, it is like the title suggests a straightforward film, but that’s not necessarily a bad thing.

Alvin Straight (Richard Farnsworth) is old. He doesn’t have a driver’s license, because he can’t see. He refuses to use a walker so he walks with two canes. He has the weight of a lifetime of memories and regrets on his shoulders. He is encumbered and refuses to admit it. His brother Lyle (Harry Dean Stanton) in Wisconsin has a stroke. Alvin, being a stubborn old geezer, decides that he will ride his lawn mower from Iowa to Wisconsin.

At the beginning, we’re treated to some really Twin Peaks vibes due to the soundtrack by Angelo Badalamenti and the b-roll footage of grain harvesters cruising down the rows of crops. Moments like those happen throughout the film, but for the most part The Straight Story‘s a pretty normal, heartwarming family movie. It’s bizarre in its unexpected-from-Lynch lack of bizarreness. By practicing restraint, though, he makes a very intimate film.

Most of the movie is Alvin riding on the shoulder of highways, at probably 5 mph, with nothing else going on but soundtrack and scenery, fields on fields on fields. Some of the movie, however, is Alvin’s one-on-one conversations with the people he meets on the road. This movie turns a real old man’s story into a real folk legend. He encounters and soothes the people caught up in the fast busy world. He provides an open ear for concerns and worries. The thing that gets me here is that yes, it’s a movie about an old man charming people with his life lessons and by all accounts that should be Hallmark cheese, but there’s something so genuine about these moments. Farnsworth really does a great job of carrying the movie on his shoulders (or in his trailer pulled by a lawn mower). You never know whether or not this is how the real Alvin Straight was, but you really hope he was. And by the end you even kind of believe he was.