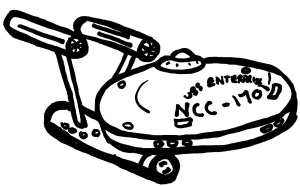 A few months back, I wrote about the then-upcoming release of Star Trek Beyond and discussed my hopes for the film and the franchise in general. I wasn’t particularly excited after the first trailer, but the second trailer seemed a bit better, and the fact that Simon Pegg was one of the credited writers was certainly a point in the film’s favor, given his actual fondness for the franchise (in comparison to Roberto Orci, which I’ll get to in a minute). A generally favorable early critical response was also heartening, despite the general dearth of any significant marketing push for the film. I did see the same TV spots play before almost every YouTube video I watched in the past three weeks, but I can never tell if that’s marketed to me specifically as a Star Trek scholar or indicative of a larger initiative. And, as a scholar, was I satisfied?

Yes? Mostly? This is definitely a fun movie, and a major improvement over the tone deaf Into Darkness, which was bad on a such a high number of levels that it’s difficult to nail down which one was most absurd. Was it the nonsensical nature of the motivation of the film’s antagonists? Was it the fact that their motivation might actually make sense when viewed through the lens of the particular madness of screenwriter and notable 9/11 truther Roberto Orci (there’s a decent article about this on BirthMoviesDeath, which is pretty great even though I have mixed feelings about Devin Faraci)? Was it the recasting of a character whose name is Indian and was previously portrayed by a person of color with Benedict Cumberbatch? It was probably that.

I went into greater detail about my feelings about both of the previous films in this reboot timeline in the previous article, so I won’t get into it here, but I will say that, although this film is being billed as a return to Star Trek’s roots or a real “classic style” Star Trek story, that’s not entirely true. Of course, given that the same thing was said about Insurrection back in 1998 (and, for better or worse, that’s a more or less true description of the film’s premise if nothing else), that’s not necessarily a bad thing. This is still a film that takes characters from a fifty year old television series where most problems were solved within an hour and attempts to map them onto a contemporary action film structure, which works in some places and not in others. Other reviews of the film have also stated that Beyond is a more affectionate revisitation of the original series than the previous two films, which is also mostly true. The film does suffer from the fact that the opening sequence bears more than a passing resemblance to a scene in Galaxy Quest, which is a stark reminder of the kind of fun movie that can be made when someone loves Star Trek rather than simply sees it as a commercial venture. Overall, though, you’d be hard pressed not to get some enjoyment out of this film, Trekker or no.

The film opens 966 days into the Enterprise’s five year deep space exploration mission, and Kirk (Chris Pine) is beginning to feel the weight of both the mission and the impossibility of living up to his father’s legacy. When the ship docks at Starfleet’s newest starbase, Yorktown, a ship appears from a nearby nebula containing one alien astronaut, who says that her ship crashed on a mysterious planet within said nebula and asking for assistance. In true Federation fashion, Kirk and Krew jump at the chance to help out, but are immediately attacked as soon as they penetrate the nebula; the crew is forced to abandon ship, ending up scattered and/or captured by the villainous Krall (Idris Elba), who seeks a doomsday MacGuffin in order to exact violence against the concept of peaceful unity in general and the Federation in particular because of its idealization of these virtues. Along the way, Scotty (Pegg) meets a woman named Jaylah (Kingsman’s Sofia Boutella), who helps him reunite the crew and to plan a rescue and escape.

There’s a lot to love here. There are references peppered throughout to other parts of the franchise, and instead of feeling hamfisted or forced as in previous installments of the reboot series, they feel natural here. There are more overt connections, with the basic plot about a dangerous planet that acts as a graveyard for various interstellar travelers and their ships being somewhat reminiscent of the animated Star Trek series episode “The Time Trap,” as well as one of the proposed fates of a starship lost a century previous being that it was snatched by a giant green space hand, which happened to the original Enterprise in “Who Mourns for Adonis?” Kirk’s opening log even references the fact that there’s a lot of shacking up going on aboard the ship during its mission, which is undoubtedly a reference to the fact that NBC balked at Gene Roddenberry’s proposal that the coed Enterprise crew be composed of roughly half men and half women; the story goes that one exec stated that this would make it seem like there was an awful lot of “funny business” going on. Likewise, Roddenberry’s original script treatment was about a starship that bore the name Yorktown, not Enterprise, leading to the starbase in this film being named for the former. Those are pretty obscure references to pull out and use for the plot of this movie, and that’s pretty indicative of how much this film cares about the fandom. More obscure references, like discussion of the dissolution of the MACOs and the Xindi and Romulan Wars (all of which are references to Star Trek: Enterprise), the possibility of accidentally splicing two people together with transporters (transporter accidents are fairly common in the franchise, but this is probably a shout out to the Voyager episode “Tuvix” in particular), Kirk’s birthday melancholy and even some of the lines he uses in his toast (from Wrath of Khan), and the appearance of a Commodore Paris (the Parises being a family with a long history of Starfleet ervice, most notably Tom Paris of Voyager) are scattered throughout and are, frankly, quite welcome.

Of course, references do not a great Star Trek film make. There are some things that don’t quite work, and given that the film runs just shy of 2 hours and that there has been some discussion of what was cut (mostly backstory for Krall and Jaylah, but smaller moments like Sulu kissing his husband as well), there are some things that don’t quite read as well on screen as they likely did on the page and/or before the film was edited down. I’m also never going to be completely on board with the use of high speed land-based chases in Star Trek; I know that Justin Lin comes from the Fast/Furious franchise so that’s really his wheelhouse, and as a result these sequences at least work better than previous attempts (I’m looking at you, Nemesis). And I know that it’s nitpicky to point this out, but there’s a lot of Hollywood science going on in this movie. First of all, nebulae are not composed of giant rocks; they’re made up of mostly dust and ionized gases. The film presents the nebula surrounding the mystery planet as being more like the Hollywood imagining of what an asteroid belt looks like, with city-sized rocks knocking into each other; real asteroid belts are mostly empty space with some rock throughout (in space, such a small area with such large pieces of debris would mean that the rocks the Enterprise works so carefully to navigate would pulverize each other into dust within a very short time, relatively speaking).

But, this is still a good movie. There is a classic Star Trek idea here, in that Krall hates the idea that the galaxy is uniting under a banner of peace instead of strength/valor and will do terrible things to demonstrate his devotion to his anti-Federation ideals, as well as the fact that he is opposed and ultimately defeated by the strong bonds that the crew of the Enterprise have and their devotion to the ideals of unity and exploration. It’s not a terribly deep humanistic ideal, and is so faintly traced that the film could be accused of paying lip service to that idea more than actually exploring it, but the fact that this film actually bothers to have this idea means that this movie is actually Star Trek, and not just JJ Abrams’s Star Wars demo reel wrapped in Star Trek’s clothes. The new additions to the cast are very engaging as are the old standards, and there’s a lot of story here that makes it well worth investing in a visit to the theatre. The end of the film legitimately left me with damp cheeks (for those of you who have already seen it, I’m talking about the photo that nuSpock finds in Spock Prime’s possessions), and I can’t wait to see it again. It’s not a five-star movie, but it has my seal of approval.