At the time I’m writing this it’s been over a week since I’ve seen a proper movie, which is likely the longest stretch I’ve gone without watching one in at least two years. Thanks to the ever-expanding grey area of what does & does not qualify as cinema, however, I feel like that itch is being scratched elsewhere, with a surprising amount of that content relating to pop music. For instance, long form music videos like Beyoncé’s Lemonade or our former Movie of the Month Girl Walk //All Day and prestige television shows like Baz Luhrmann’s recent chaotic mess of a hip-hop disco musical The Get Down all feel cinematic without being what’s traditionally considered cinema. Gallons of ink have already been spilled about how television is becoming more like film & vice versa (in the form of never-ending franchises like the Marvel Cinematic Universe),but what’s been of particular interest to me lately is how music videos & live concerts have been doing the same. This might explain why while attending a 3-D Kraftwerk concert in New Orleans last Friday I found myself (between spaced out, gin & soda fueled dancing) asking “Is this cinema?” I don’t know if it was because I hadn’t watched a film in days & was desperate to tap myself into that headspace, but I wound up deciding that yes, it was. And it was one of the best movies I had seen all year.

If you’re wondering, like I was before I reached the Orpheum that Friday, exactly what a “3-D concert” is (besides watching three-dimensional musicians perform in a three-dimensional space), Kraftwerk basically performed in front of a stage-sized screen that displayed a moving image to correspond with each song, not unlike a live music video. These images were made to look 3-D through cardboard glasses specifically printed for the show & distributed at the entrance. Now, watching a screen at a live event isn’t all that novel for a 2010s concert experience. In fact, it’s almost become standard. Besides attendees watching acts through their view-blocking, media-capturing smartphones, bands often use projections & display screens to enhance the live music experience. From metal bands doing living room sets in front of projections of silent horror relics to gigantic crowd music festivals using jumbotrons to reach the folk miles form the stage, we’ve all witnessed 2-D visual media incorporated as part of the live concert experience. The concept goes back pretty far down the history of rock n’ roll too, touching on the rudimentary light shows of 60s psychedelia & the multimedia assault on the senses of acts like The Butthole Surfers. There’s something different about the way Kraftwerk is crafting their live experience that makes it more of a recognizably cinematic endeavor, however, and that difference has a lot to do with the immersion & the gimmickry of the 3-D experience.

When trying to conjure the ways live music is gradually becoming more cinematic the first thing that might come to mind is the live performance of movie scores for public screenings. Radiohead’s Jonny Greenwood performed live versions of his There Will Be Blood score for recent events. Prog rock legends Goblin embarked on an entire international tour where they performed their killer score for Dario Argento’s Suspiria along with screenings of the movie. Local musician Hellen Gillet recently performed a live score for Fritz Lang’s silent masterpiece Metropolis at an outdoor screening outside the US Mint in the French Quarter. These examples of cinema seeping into the live music experience are exciting, but they’re also more traditional than they might initially appear. Think back to the early days of silent cinema where soundtracks would be performed by a live, in-house pianist. Updating that dynamic for a pop music context is exciting, but it’s not necessarily the innovation of a homogenous live music & cinema blend that acts like Kraftwerk have been bringing to concert venues.

What’s fascinating to me lately is the film-concert hybrid, a cinematic experience specifically designed to be engaged with as a live musical act. The multimedia performances of Björk’s Biophilia & Laurie Anderson’s United States I-IV were brave steps in that direction, but the first live music cinema experience I can remember attending myself was Dan Deacon’s collaboration with visual artist Jimmy Joe Roche. Live performances of their visual album, the blisteringly psychedelic Ultimate Reality, were singularly overwhelming experiences. Two live drummers set up on opposite sides of the stage in front of an oversized projector screen. They played mechanically in sync over a recording of Deacon’s trademark synth assault, accompanied by a mid-length feature film collage of bright, kaleidoscopic imagery lifted from various Arnold Schwarzenegger films. Ultimate Reality pushes its concert-cinema hybrid even a step further by marrying its aural & visual assault with a loose narrative in which all of Arnold’s movies, from Total Recall to Junior, are melted into an incomprehensible mess of a storyline that doesn’t exactly resemble the story structure of even the loosest, most Lynchian of film narratives or the vibe-driven, movement-based structure of a live concert. Ultimate Reality occupies a strange gray area between those two extremes, the same cinematic live music territory I experienced while watching Kraftwerk 3-D.

Kraftwerk is a seminal band, having played the role of innovator for nearly half a century. Listening to them perform live you can detect the early beginnings of pop music genres as varied as hip-hop, techno, industrial, and (duh) new wave lurking in the sparse, cold sounds of their digital meditations. They marry this slow, synth-soaked hypnosis, each song stretching on for dozens of minutes at a time, with a stark, minimalist, stage show. All four members of the band are centered at their own synthesizer podiums, remaining stoically still as they mix their digital soundscapes into a cohesive whole. It took me almost two songs into their set to even realize that the vocals were being provided live by one of the members. Everything felt so fixed & so clinical. Behind those four synth-commanding demigods stands a gigantic projector screen, which of course displays 3-D imagery related to each song performed. The imagery can range from archival footage of supermodels of the 1950s (during my personal favorite Kraftwerk tune “Das Model”) to crude digital renderings of a pixelated car on the highway (during the song “Autobahn”), an intentionally outdated aesthetic that recalls the look of certain Tim & Eric segments or, perhaps more appropriately, the music video project that accompanied the Death Grips album Government Plates. The rudimentary, elemental nature of these images matched the sparse genre seedlings of Kraftwerk’s music and transported their audience into a cinematic headspace that’s foreign to most concert experiences, even ones aided by higher tech on their display screens.

Unlike Ultimate Reality, 3-D Kraftwerk didn’t form its individual vignettes into a larger narrative whole. Instead, each music video experience was allowed to exist as its own separate meditation, functioning almost like a horror anthology, with the concert hall itself standing in as a wraparound segment. One song dove into the ever-present threat of nuclear war. One meditated on the machine-like efficiency of athletes who participate in the Tour de France. One provided a visualization of the digital landscape where the band’s Tron-like costumes might be considered high fashion. A particularly playful rendition of “We are Robots” had the band replaced onstage with mannequins propped up behind their synth podiums & projected in 3-D behind them. That last moment in particular pointed to the absurdity of paying to see a band so rooted in the artistry of music studio production perform “live” in the first place. The very idea of “a 3-D concert” is an exceedingly ridiculous concept on its own and the band never shied away from pointing to that absurdity. Instead of pursuing a more kinetic stage show, they turned their songs into a collection of short films with live music accompaniment, each devolving into long form meditations on concepts like international travel & “computer love”. The result felt a lot like watching a movie. Instead of feeling comradery with the band, like being within arms’ reach at a $5 punk show, you feel as if you’re watching a collection of mannequins stand before a silver screen; it’s distancing, but it’s also dazzling.

3-D technology has always been a William Castle-type gimmick meant to sell extra movie tickets to audiences looking for a novel & immersive cinematic experience. It was a perfect choice for Kraftwerk to draw an audience in with that cinema-specific gimmick because their live show already feels so similar to watching a movie in the first place. As the screen-heavy multimedia approach to the live concert becomes increasingly cinematic it’ll be interesting to see where other bands can take the basic idea explored by 3-D Kraftwerk, Dan Deacon, and others into new, more narrative territories. It’s not a perfect fit for every musical act, but in a struggling industry suffering long-term declines in album sales the idea of live music cinema could be a great potential moneymaker for bands more prone to in-the-studio tinkering than live rock n’ roll antics. More importantly, though, it could lead to innovative modes of great, cinematic art, the next evolution in both the movie going & live music experiences as we know them. It’s only appropriate that Kraftwerk would be one of the acts on the forefront of that innovation, as they have been with so many other musical advancements since the late 1960s. 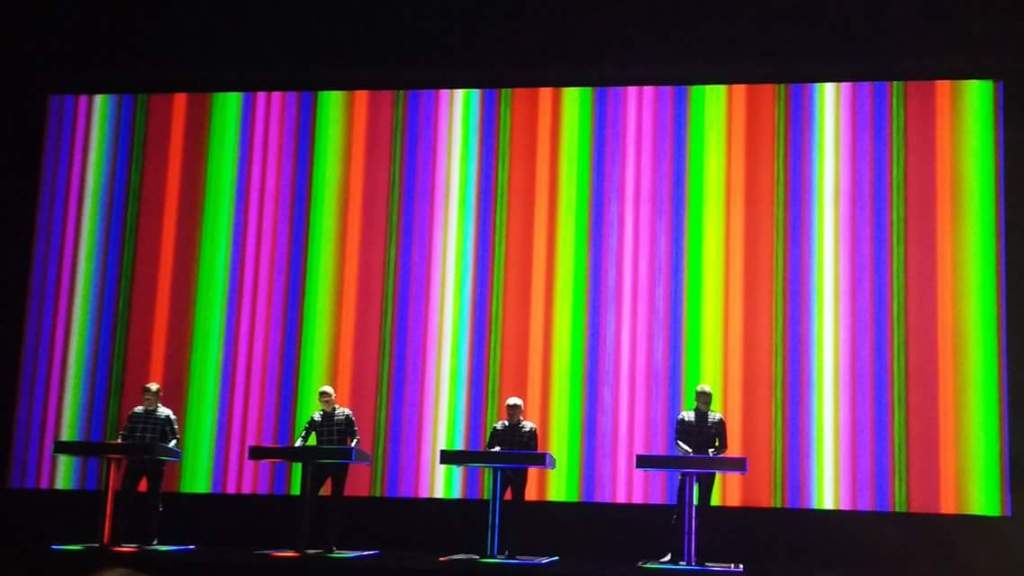