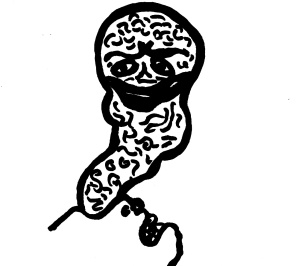 Six years after the release of Basket Case, Frank Henenlotter unleashed a new “boy and his monster” movie onto the world with Brain Damage, a film with a similar conceit to his first work but with even more disgusting special effects, a slicker production style, a new villainous creature, strong metaphorical subtext, and homoeroticism to spare. Though less well remembered than the cult classic that preceded it, Brain Damage is nonetheless a lot of fun, and may be objectively better than its predecessor.

The film opens in the home of elderly couple Morris and Martha (Theo Barnes and Lucille Saint Peter), where Morris has just returned from the butcher’s shop with a bag of animal brains. When he takes the brains to the bathroom, however, he descends into a state of panic upon discovering that the occupant he expected to find within is not present. The two frantically search the apartment, knocking over books and sculptures in a mad dash to find “him.”

Meanwhile, in a different apartment in the same building, protagonist Brian (Rick Hearst) is feeling unwell, so his brother and roommate Mike (Gordon MacDonald) accompanies Brian’s girlfriend Barbara (Jennifer Lowry) to the concert that she and Brian were to attend. Brian later awakes to discover blood all over himself before collapsing into giggles and making his way back to his bed, where he has a psychedelic experience of soothing blue light and his room filling with water. When he awakens again some time later, he discovers a strange, phallic creature (voiced by horror host John Zacherle) in his bathtub. The creature, which we will learn is called Aylmer, speaks to Brian in a friendly, avuncular voice that belies his monstrousness, explaining to Brian that “This is the start of [his] new life, a life without worry or pain or loneliness. A life filled instead with colors and music and euphoria. A life of light and pleasure.” A confused Brian asks “Who are you… what are you?”, to which the creature replies “I am you. I’m all you’ll ever need.”

Thus a truly new life begins for Brian when the creature’s cutely-humanoid-in-an-E.T.-way (he even has very human blue eyes) face opens, Predator-style, to show a horrifying mouth full of monstrous teeth and a kind of biological needle that he injects directly into Brian’s brainstem. Inside Brian’s skull, we see the needle drop blue liquid that shoots sparks across the folds of his cerebellum, while Brian himself becomes euphoric and has vivid hallucinations. (For the sake of my potential future political career, I won’t say how I might know what drug-induced hallucinations look like or how they make one feel, but I will say that these are probably the most realistic ones committed to film.) Brian and Aylmer have a seemingly harmless symbiotic relationship for a few minutes, before Aylmer claims and eats the brain of his first random victim, with Brian none the wiser. Of course, he has to find out sooner or later, but will he be able to do anything about his accidental bargain with the devil in time to stop more killings? Or prevent himself from losing Barbara forever? Or before Martha and Morris figure out where their supplier has disappeared to?

There’s a lot going on in this movie, and it’s hard not to think of this as the Nightmare on Elm Street 2: Freddy’s Revenge of Henenlotter’s oeuvre. Both films are much more homoerotic than their respective predecessors (both even feature the protagonist sharing a grimy group shower with a muscular older man, although the showering bodybuilder who spends a lot of screentime lathering himself in Brain Damage is much less sinister than Jesse’s coach). Both movies feature villains who are motivated by their need to possess the young man who assists them in their machinations, so that they can freely move about and sate their respective hungers. Both are also heavily steeped in their metaphorical imagery, although their central metaphors differ.

In Freddy’s Revenge, Freddy represents the protagonist’s repressed homosexuality, seeking to possess the body of Jesse to kill the female love interest whose kiss can help banish Freddy forever. In Brain Damage, however, Aylmer represents the specter of addiction that gradually begins to manifest in Brian’s life, forcing him to do things he finds morally abhorrent in order to get the fix that he now seems unable to live without and driving a wedge between Brian and the people who love him.

This metaphor is clearest in those scenes during which Brian sequesters himself in a seedy hotel to go cold turkey*. Aylmer tells the sweating, aching, withdrawing Brian that he can wait out the young man’s withdrawal symptoms, his deceptively friendly and paternal voice never wavering in tenor or becoming threatening, which is a particularly smart choice on Henenlotter’s part. In fact, the film’s final scenes are predicated on the intensity of action and self-deception that are so often an element of addiction, with the film bookended by Martha and Morris’s obsession with reclaiming their source. Although the film’s ultimate ending is indecipherable, the metaphorical subtext that serves as Brain Damage‘s structure is stronger than the more straightforward revenge narrative that is Basket Case‘s backbone, even if the homoerotic content is irrelevant to that central metaphor. The former is in many ways a more fun film, especially if you want to see the hero splash around in the bathtub playing with his new phallic best friend for an inordinate amount of time.

*Unfortunately, this is not the Hotel Broslin, so we don’t get to see those characters again. Duane and a basket-bound Belial, however, do cameo in a scene where they sit across from Brian on the subway, giving us the first indication that the duo lived through their ostensible demise at the end of Basket Case, two years before that film’s direct sequel.