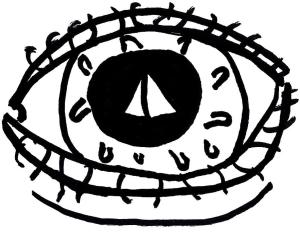 When I first reviewed Phase IV (1974) for this site in our earliest months of film-blogging, I approached it as a surprisingly solid 4-star effort that I expected to be much schlockier in its payoffs, given its place in the larger genre of killer-ants cinema. Upon revisiting the film to track its influence on our current Movie of the Month, Panos Cosmatos’s psychedelic freak-out Beyond the Black Rainbow, that 4-star rating reads like an insult. My engagement with Phase IV as transcendent schlock that impresses only as a subversion of genre expectations was one intensely colored by its context as an early Mystery Science 3000 victim and a participant in an often-campy killer-ants cinema tradition. Seeing the film through Cosmatos’s eyes, which often blend camp & transcendent art aesthetics until the two tones are indistinguishable, has only elevated Phase IV in my esteem. I’ve learned to disregard its alignment with genre tradition, to engage with it as a one-of-a-kind object. I now see Phase IV for what it is: one of the greatest cinematic achievement of all time, no caveats.

A significant part of Beyond the Black Rainbow’s lore involves Panos Cosmatos’s childhood trips to a video rental store in the 1980s, a holy ground named Video Addict. There he would browse the cover art images of horror movies he was too young to rent and imagine what those movies were like based on that advertising alone. His stated goal for Beyond the Black Rainbow was to create “an imaging of an old film that does not exist,” which effectively captures the film’s unique balance between nostalgic pastiche & genuinely eerie, otherworldly menace. Of course, Cosmatos has seen a movie or two since he was too young to rent those Video Addict cassettes without parental supervision, so there are plenty of actually-realized titles he also cites as a direct influence on Beyond the Black Rainbow, along with the nonexistent ones he imagined as a child: Dark Star, Manhunter, Phase IV, The Keep. Phase IV is the most illuminating citation listed among those titles, as it adds a new wrinkle to those Video Addict daydreams; there were existing old films that approximated Beyond the Black Rainbow’s general eerie psychedelia aesthetic in an era when that would have been current, not nostalgic. They were just commercial flops hardly anyone saw in their initial run.

Phase IV’s influence on Beyond the Black Rainbow’s psychedelic parascience is immediately apparent in its animated outer space intro, which feels like it could have been pulled from an infomercial for the fictional Arboria Institute. While an information dump of opening narration explains how a mysterious signal from outer space triggered an evolution & militarization of ants on Earth to usurp mankind’s place on the food chain, legendary graphic designer Saul Bass’s psychedelic visuals wash the screen in intense, saturated hues. Eventually that narration gives way to a lengthy, dialogue-free stretch of eerie, up-close nature footage of ants communicating & organizing in artificial environments to a snythy horror score. It’s a hypnotic, immersive vision of paranormal menace, one that could easily play as outdated kitsch but instead triggers a nightmarish trance. It’s the same effect that’s achieved throughout Beyond the Black Rainbow, especially in its Altered States-reminiscent LSD experiment flashback where its main antagonist “looks into the Eye of God.” It’s an effect that returns full-force in Phase IV’s psychedelic, nihilistic conclusion as well, which describes a next stage in human evolution triggered by the paranormal ants’ attacks on mankind, a much more fully-committed exercise in this spiritual psychedelia than the prankish slasher-throwback ending of Cosmatos’s film.

There are more narratively-based parallels between these two works that reach beyond their aesthetics’ similarities, despite Cosmatos’s work having nothing to do with killer ants. Like Beyond the Black Rainbow, Phase IV is mostly staged at a remote science research facility where a small cast, including a captive young woman, are disconnected from the world at large as they approach the precipice of the next stage of human evolution. Phase IV also concludes with its head researcher in a rambling, decrepit state, recalling the physical & mental degradation of Dr. Arboria in the latter half of Beyond the Black Rainbow. Still, discussing either film in terms of plot details feels entirely beside the point. These are works that largely tell their stories through the art of editing, evoking subliminal responses in their imagery more than guiding audiences through a traditional A-B narrative. Phase IV’s influence on Cosmatos’s work is most potent in its long, silent stretches where the screen is washed with color (whether the sickly yellow of pesticides or the rich reds of outer space) or filtered through the kaleidoscopic vision of the ants’ POV, repurposed from dorm poster psychedelia for a new, genuinely unnerving effect. Their narrative parallels are mostly just lagniappe.

Interestingly enough, Cosmatos’s mission of evoking “an imagining of an old film that does not exist” in Beyond the Black Rainbow is not at all at odds with its more concrete citation of Phase IV as a direct influence, when that film (as far as I can tell) actually does exist. The most Beyond the Black Rainbow reminiscent-footage from Saul Bass’s film is its “lost” alternate ending, cut by the studio before Phase IV’s release against the director’s wishes. In a four-minute montage recalling the vibrantly edited imagery of Bass’s credits-sequence design work for legendary directors like Hitchcock, the “lost” ending of Phase IV depicts the next evolution of man triggered by the ants in a dialogue-free swirl of stoney baloney imagery that matches, if not surpasses, anything depicted within the Arboria Institute in pure psychedelic potency. As Beyond the Black Rainbow was released two full years before this recovered final montage of Phase IV finally screened for the public in 2012, Cosmatos’s general estimation of those “lost” minutes’ effect & aesthetic in Beyond the Black Rainbow is just as much of an extension of his effort to imagine an old film that does not exist (at least in the public eye), as it is further proof that he & Bass were on a spiritually paralleled vibe when they made these two narratively dissonant sci-fi thrillers.

Saul Bass & Panos Cosmatos’s parallels as kindred spirits have negative connotations as well as positive ones. Phase IV was Bass’s sole feature film as a director (despite this clout as an Academy Award-Wining filmmaker for his graphic design work). It was met with middling reviews, disastrous box office, studio meddling that mutilated its ending, and eventually ironic MST3k mockery. Even now, five years after its “lost” ending was screened for select audiences, no restorative Director’s Cut of the film has been released on home video with that ending intact (or even included as a Special Feature), so that the only place to watch it is in shoddy camcorder footage on YouTube from those initial screenings. Despite the transcendent achievements of his own debut, Cosmatos has also suffered a slow road to respectability, taking a full 8-year gestation period to realize his follow-up, this year’s (more widely-seen & revered) Mandy. Cosmatos has largely survived early dismissals of his work as empty, self-indulgent nostalgia bait, but his struggle to follow up Beyond the Black Rainbow with a sophomore effort does recall Saul Bass’s own struggles to get another feature off the ground in Phase IV’s wake.

These are two visionary weirdo auteurs who invite off-hand dismissal of their sensory-suffocating art, despite delivering some of the most distinct films ever made. Even in Saul Bass’s case, I feel guilty for not taking his work seriously enough on its own terms beyond the context of my genre biases until a years-later second look. These are singular achievements that only feel familiar in their initial impact, as if we’re imaging similarities to old films that do not exist.

For more on November’s Movie of the Month, Panos Cosmatos’s psychedelic debut Beyond the Black Rainbow, check out our Swampchat discussion of the film.

2 thoughts on “Beyond the Black Anthill”