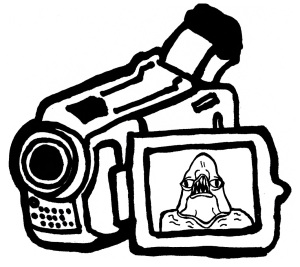 One of the major reasons I believe Local Legends to be the definitive masterwork of backyard microbudget filmmaker Matt Farley is its total, self-aware sense of honesty. Having recorded nearly 20,000 novelty songs & filmed roughly a dozen backyard horror comedies with his New England community over the last two decades, Farley is a daunting artist to get into as a new fan. The reason I presented Local Legends as a Movie of the Month entry-point instead of more typifying works like Don’t Let the Riverbeast Get You! or Monsters, Marriage, and Murder in Manchvegas is that it serves as a kind of crash course overview of everything Farley has attempted to accomplish with his Motern Media brand. It’s a brutally honest self-portrait of an amateur artist’s life in the self-publishing digital hellscape of the 2010s, as well as a shameless informercial peddling Farley’s entire back catalog of CDs & DVDs. The only problem is that if you’re not already familiar with Farley’s body of work or online persona that honest self-portrait can read as too preposterous to possibly be true. Watching Matt Farley leave free DVDs for strangers to find around his Massachusetts neighborhood like Easter eggs, obsessively Google himself hourly for potential feedback about his work, give out his real-life cellphone number in his songs (603-644-0048) in case anyone wants to contact him about his work, and filibuster every possible social event to bloviate about his own creative genius can feel outlandish for anyone unfamiliar with Motern Media. Personally, I know everything onscreen in Local Legends to be true – not only because of my own experience as an amateur blogger, podcaster, and zinester in the 2010s, but also because of how it is impossible to post anything about Matt Farley online without interacting with him directly.

As soon as I posted a review of Don’t Let the Riverbeast Get You! last summer, Matt Farley was promoting & retweeting the post to his minor, dedicated cult of Motern fans. Since that first interaction, my own gradual indoctrination into that cult has been aggressive & overt. Matt Farley has continually reposted every piece I’ve written about his work. He has even branched out to take an apparent interest in our projects that have no direct relation to his own, especially when our interests overlap: reviews of Kubrick classics, a Movie of the Month discussion of The Pit (a major inspiration to the backyard horror comedies he makes with creative partner Charles Roxburgh), our movie podcast’s usefulness in soundtracking his miles-long urban walks, etc. Beyond any personal entertainment Farley might be gaining from these exchanges, this direct, active engagement with individual members of his audience is ingenious from a self-promotion standpoint. I have purchased physical copies of movies & albums from Farley directly in the last year (despite most of his media being readily accessible in all the familiar online streaming haunts) mostly because he keeps himself on my mind as an amateur artist who could use the support. I’m even strongly considering traveling to an upcoming Motern Extravaganza (a five-hour annual concert Farley holds in Massachusetts to celebrate his own media empire) which feels like being summoned by my new cult leader for an official induction ceremony. Practically speaking, this personal engagement also makes it extremely difficult to critique any of Farley’s work negatively, no matter how silly or casually tossed off. People say cruel & harshly critical things about celebrity artists online all the time; that’s essentially what Twitter is for. I doubt that would be true if every filmmaker or songwriter directly responded to each cruel Tweet as just a fellow human being doing their best. Matt Farley’s direct online engagement with his audience & critics removes the veil of the Internet’s online anonymity to create a more truthful picture of what it means when you slag a stranger’s art in a public forum.

Of course, directly recruiting a dutiful audience one fan at a time would be an absurdly labor-intensive mode of self-promotion for most artists, but that’s what makes Matt Farley so remarkable. We here at Swampflix are a lowly, amateur crew of Louisiana film nerds with virtually no online clout as a self-published collective. A filmmaker we admire directly interacting with and even promoting our work is a huge deal for us, which in turn means that we end up amplifying our own promotion of Matt Farley & Motern Media when we share these experiences with friends elsewhere on social media. Farley went even further than that level of typical interaction with his audience, though, when he posted a song about me this past Ash Wednesday, titled “Brandon Ledet Reviews Movies Excellently.” In Local Legends, Matt Farley is radically honest about how he uses search engine optimization techniques in choosing topics to write songs about: celebrities, gluten, kid-popular terms like “poop” & “fart,” etc. Each streaming play of these songs earns Farley fractions of pennies, which accumulate over tens of thousands of tracks to a living wage. It’s a next-level form of self-promotion genius to include amateur bloggers & dedicated fans like myself on his Papa and the Razzis shout-out songs among actually famous names like Ava DuVernay & Rian Johnson. By appealing directly to my vanity, Farley was guaranteed some of those, sweet, sweet penny-fractions as I would no doubt dutifully share the song with family & friends. I did. Several times. And I’m doing so again here in this piece so that I can possibly contribute to more films like Local Legends & Don’t Let the Riverbeast Get You! getting made in the future (and, by all reports, his next film Metal Detector Maniac is already on its way). Also, since Matt is 100% certain to read this article, I’d also just like to thank him for the uncanny experience of directly interacting with an artist I admire so much in such a personal way. If nothing else, it’s been yet another affirmation that the self-published artist’s self-portait in Local Legends is 100% real, no matter how bizarre it may initially seem.

For more on April’s Movie of the Month, Matt Farley’s satirical self-portrait Local Legends (2013), check out our Swampchat discussion of the film, this look at our Motern Media zine, and last week’s podcast episode on our favorite Matt Farley films.