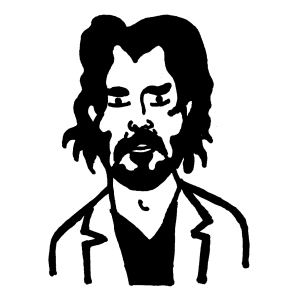 Keanu Reeves is having a most excellent summer. Shortly after the pulpy sci-fi dud Replicas drifted through American theaters barely noticed, like a silent fart, Reeves has bounced back into audiences’ good graces with a triple onslaught of well-loved features. Between his starring roles in the increasingly popular action series John Wick 3 and his bit-part stunt-casting in Toy Story 4 & the straight-to-Netflix romcom Always Be My Maybe, it’s been a veritable Summer of Keanu. An actor that was one widely derided as being a one-note, rangeless goofball (especially in his earliest castings in period dramas) is finally getting his due as a loveable, enigmatic screen presence that’s been putting in great work in risky projects for three decades now – an action star of the people.

All of this Keanu love has spilled over from adoration of his work into a rhapsodic appreciation of his real-life persona. This is the year Keanu was officially declared to be The Internet’s Boyfriend, with unusually positive online warmth expressed for how often he works with female directors, how respectful he is of women’s personal space during photo ops, and his loyalty to his martial arts collaborators from his earliest days as an action star. Whatever affection we felt for the endlessly watchable goofball in the relatively ancient days of the Sad Keanu meme has now built to a raging forest fire of online lust & obsession, to the point where we’re even intently listening to his personal philosophy on Death & The Afterlife. You can feel it here locally too, where set photos of a (newly beardless) Keanu during local shoots for Bill & Ted Face the Music has people vibrating with pure love for him (when not concerned about his safety running around in the New Orleans summer heat).

The only downside to all this pure, gushing Keanu love is that it emphasizes how valuable he is as an aloof West Coast heartthrob with an adorable stoner demeanor. Part of the reason we think of Keanu Reeves as a one-note actor is because his early success as Ted Theodore Logan forever typecast him as an adorable bimbo. He’s gradually been able to divert that loveably aloof screen presence into an unlikely career as an action star, but it’s not the only mode Keanu Reeves can play. In fact, some of his most effective, memorable turns onscreen have been against type as monstrous, unrepentant assholes. By all accounts, Keanu Reeves is a wonderful, kind, thoughtful person in real life. He can be a world-class villain when we set him loose onscreen, though, and it’s a shame he doesn’t have the opportunity more often.

Listed below are five stand-out roles where Keanu Reeves excelled at playing a garbage human being, despite his loveable real-life persona. There weren’t many options to choose from (especially if you don’t include grey area selections like his unscrupulous lawyer in The Devil’s Advocate or his adulterous DJ dad in Knock Knock). I’m also ashamed to admit that I didn’t seek out personal blindspots like Much Ado About Nothing (in which he plays a dastardly rogue) and The Watcher (in which he plays a serial killer) before writing this. Still, I believe this quick list of villains Keanu Reeves characters can alone serve as proof that The Internet’s Boyfriend can be an effective, chilling creep when given the chance. He’s more than just a pretty face and a kind stoner-philosopher soul. The man has range. He can be a total asshole.

1. The Neon Demon (2016) – Keanu’s vilest scumbag might be his bit role and Nicolas Winding Refn’s fashion-world art-horror satire. In the film he plays an unforgivable sleazy motel manager in the dingiest corner of LA, preying on the underage runaways who hide away from their parents & obligations while chasing dreams of being a star. There aren’t many things in this world that can make Keanu Reeves grotesque in our adoring eyes, but hearing him advertise access to a young girl’s body as “Real Lolita Shit” will just about do it. 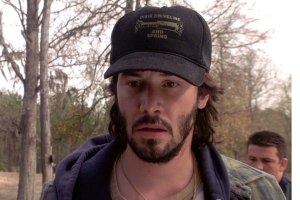 2. The Gift (2000) – The only title I can conjure where Keanu’s anywhere near as despicable as he is in The Neon Demon is his turn as an abusive husband in Sam Raimi’s psychic-visions murder mystery The Gift. He’s powerfully despicable as an alcoholic wife-beater in this sweaty, supernatural thriller. Plus, you get the added bonus of seeing him play a caricature of poor Southerners so broad it would feel at home in an (uncharacteristically dark) SNL sketch. 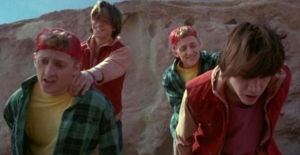 3. Bill & Ted’s Bogus Journey (1991) – One of the most conveniently concise visualizations you’re likely to see of Keanu acting against type in these villain roles is the one where he gets to villainize himself. In the unhinged, absurdist sequel to the popular 80s time-travel comedy, Keanu plays both Ted Logan and his evil robot doppelganger, who kills the “real” Ted early in the first act. It’s remarkable to watch how easily Keanu curdles Ted’s mannerisms into something so, so very punchable in the dual role (but not too remarkable if you keep in mind the real Bill & Ted’s alarming comfort with homophobic slurs).

4. The Bad Batch (2016) – I wasn’t especially in love with Anna Lili Amapour’s daylight cannibal horror when I reviewed it, but Keanu’s role as the film’s big-bad does stand out as one of its highlights. In the film, he plays a Jim Jones-style cult leader who exploits the devotion of his followers for sexual satisfaction & greedy financial gain. It’s terrifying to think about, since the real-life Keanu could easily rope us all into a desert-dwelling drug cult if he really wanted to. Easy.

5. Always Be My Maybe (2019) – Like with The Bad Batch, I had major problems with the tone & structure of this straight-to-Netflix romcom – which was shot & edited with all the auteurist passion of an overlit Burger King commercial. Still, it’s worth watching for Keanu Reeves’s stuntcasting as “Keanu Reeves,” an extensive cameo where he mercilessly makes fun of his own public persona by making himself out to be an out-of-touch, ultra-wealthy douchebag. Yes, Keanu is The Internet’s Boyfriend, but like most boyfriends he has the capacity to be a total tool.

2 thoughts on “Keanu Reeves is a Most Excellent Asshole”