In November of 2014, I was laid off from a call center job that completed its government contract, leaving me with a lot of unexpected free time. It was a struggle to find comparable full-time office work in the couple years that followed, but I did my best to occupy myself (and pay my bills) in ways that related to the hobby I’m most passionate about: watching & discussing movies. Not all of these schemes worked out; I did not manage to turn on-set PA work or location scouting into a decent living, and the movie theater kitchen where I eventually worked as a grill cook no longer exists. The one major satisfying success from that post-college search for purpose is this lil’ ol’ film criticism blog you’re reading right now.

Swampflix started as a group effort between me, Britnee Lombas, and James Cohn after we were all left unemployed by the same defunct call center job. Our first collaboration as a group was listing our favorite films of 2014, and we’ve posted at least one piece of film writing or film-related criticism a day in the five years since that launch. Our crew has since expanded to include at least five other contributors – most significantly Mark “Boomer” Redmond (who has anchored our silly-ass takes with astoundingly thoughtful academic writing since year one), Alli Hobbs (who stuck with us for three out of five of our years), and CC Chapman (whose work in zine production, film festival coverage, podcasting, and behind-the-scenes support has kept us afloat through the many crises when it felt like the ship was going down). We’ve gradually ballooned from a small collective of amateur film bloggers to include projects as wide-ranging as podcasting, zine-making, library science, and—thanks to our newest crew member Hanna Räsänen—holiday card illustration. We even started our own Mardi Gras krewe. This is easily the longest I’ve ever collaborated on a single creative project with a group of friends, and it’s exciting to know it’s still alive and evolving five years later.

I have absolutely zero qualifications to run a film blog. My college degree is in Poetry. The first time I ever wrote critically about a movie was in the comment section of an article on The Dissolve, a now long defunct film criticism website. When The Dissolve crashed, I saw a group of much smarter, more talented, better experienced writers suffer the collapse of quality, lucrative online criticism – which has since devolved into a mess of freelance desperation & attention-grabbing hot takes on Twitter. Still, writing about movies (and setting my own arbitrary one-post-a-day deadlines) has been a great personal motivator in a way no other project has proven to be post-college. The earliest, primordial incarnation of Swampflix was when I “published” combination movie & restaurant reviews in the call center newsletter Britnee organized when we worked together, a section we called “Movies and Munchies.” In those days, she and I would trade DVDs of films from our personal libraries that the other hadn’t seen yet, a regular recommendation structure not unlike our Movie of the Month conversations that persist until today (a format I wholly ripped off from The Dissolve, I’ll admit). We write with no real authority and no significant audience, but we write with an enthusiasm for bizarro cinema and a joy for trading recommendations for little-seen movies we personally love.

A D.I.Y. film criticism collective with a niche audience & no proper qualifications, I like to think we function like an online zine. The high-contrast Sharpie illustrations we post with each review have come to feel at home with that digi-zine aesthetic, but I doubt that’s what I had in mind when I first started doodling them. Honestly, I don’t know that I ever have anything specific in mind at all for where Swampflix is going, other than I want us to do better and to do more. With this article, we’ve reached five consecutive years of daily posts – a personal, arbitrary achievement I’m proud of, but am also ready to slack off from so we can aim for bigger, broader goals. I don’t know what’s in store for us in the next five years (assuming humanity’s existence on Earth makes it that far), but I do have some big ideas on the backburner: a proper zine store, a YouTube channel, a more functional web design, public movie screenings, etc. No matter what we do or don’t accomplish going forward, however, I’m already very proud of the quality & consistency of the work we’ve already put in over the last five years. Our work isn’t always timely or precise, and it takes us about a year to reach the pageview counts that legitimate, professional blogs reach in just a month, but it’s been a personally rewarding creative project for our small crew of Southeast Louisiana film geeks.

Thank you if you’ve ever read anything we’ve written or—better yet—if you’ve ever taken one of our movie recommendations. We’ve been having a lot of fun figuring out exactly what it is we’re doing and how we can do it better moving forward. As a minor victory lap, I’m going to list below five projects we’ve tackled so far that I’m especially proud of. Enjoy!

Movie of the Month: Every month, one of us makes the rest of the crew watch a movie they’ve never seen before and we discuss it afterwards. I’m particularly proud of this year’s coverage of Matt Farley’s Local Legends (2013), a bravely honest and darkly funny look at what it’s like to produce amateur art in the digital hellscape of the 2010s.

The Swampflix Podcast: We’ve gotten significantly better at putting together a biweekly movie podcast over the last four years, figuring our shit out just in time for us to hit our 100th episode in the next few weeks. The new format we started with Episode #81: Christian Evangelicalism was a significant creative breakthrough, and I think the last 20 or so episodes since then have been especially great. I know from experience that it’s difficult to find movie podcasts that discuss low-budget, high-gimmick genre films with sincerity instead of mockery, so I’m proud to be producing one of the few that are out there (even if we’re drowning in a vast sea of better funded, better produced podcast content). 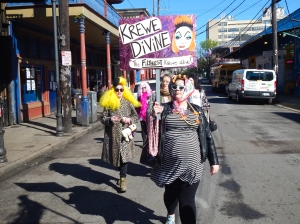 Krewe Divine: In 2017, a few members of the Swampflix crew decided to finally grow up and get serious about Mardi Gras. We collectively shed our annual personal crises about what themes to include in our Fat Tuesday costuming by pooling our resources to pray at the altar of a single cinematic deity: Divine, the greatest drag queen of all time. Our intent was to honor the Queen of Filth in all her fucked up glory by founding Krewe Divine in her honor, a costuming krewe meant to masquerade in The French Quarter on every Fat Tuesday into perpetuity.

Film Festival Coverage: Some of the most rewarding experiences we’ve had reviewing tiny films without much public visibility have been at local film festivals, something we’ve been getting more & more involved with as the years roll on. In 2019 alone, we covered dozens of films across four local festivals: New Orleans Film Fest, New Orleans French Film Fest, Overlook Film Fest, and PATOIS. Each hosted screenings of some of the best films we saw projected in proper movie theaters all year, a significant portion of which we would not have been able to cover for the website otherwise. 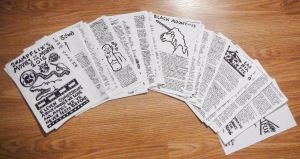 Zines: Thanks largely to the New Orleans Comics and Zines festival (R.I.P.), we’ve gradually gotten into the business of printing physical copies of pieces we’ve written & illustrated for the site – making our function as an online zine a literal, physical practice. It’s a rewarding (although labor-intensive) ritual both because there’s a tangible product associated with our work that we obviously don’t get from blogging and because it helped us contextualize everything we’re doing as an amateur film criticism collective with no chance of ever going legit. Basically, everything we know about blogging & online self-promotion we learned from physically tabling zines in the real world, mostly at NOCAZ.