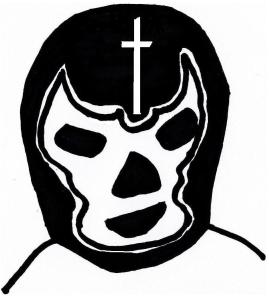 The very last pro wrestling documentary I watched when assembling my Top Ten list for the genre was GLOW, the story of an over-the-top 80s glam wrestling promotion that saw brief success on television. Wrestling for Jesus was a jarring, smelling salts follow-up to GLOW. It pulled me out of GLOW’s glitter-covered reverie only to wake me on the small-town poverty side of wrestling. This is the wrestling of backyards & gymnasiums, where audience members were likely to have attended high school or at least church with the performers. Where the Gorgeous Ladies of Wrestling bragged about how they were the greatest show on Earth, the men of WFJ thought themselves to be, you know, pretty good and some of them would even like to maybe get paid a small sum of money for risking life-altering injuries in the Lord’s name.

The wrestlers who express interest in making a modest amount of money for their time and compromised health are secular defectors of the Wrestling For Jesus promotion. WFJ, as a non-profit organization, accepts donations for their live events, but those donations are directly given to the church. The events themselves are an extension of church in a way. Performers’ promos boast about their ability to spread the gospel & sermons are delivered from the ring after matches. These men are wrestling solely for Jesus, to bring new followers into their faith through sports entertainment, not to make money. As far as recruitment tactics go, it’s a fairly convincing one.

However, participation in WFJ isn’t entirely selfless. At the very least the WFJ community helped the titular T-Money overcome the grief surrounding his father’s suicide. T-Money’s triumph over his grief may have been short-lived, but he basically thanks WFJ (an organization he runs with his wife) for saving his life. As the film progresses, his WFJ-aided recovery gradually reveals itself to be one step on a long road that would see rougher patches (like his own suicide attempt & a domestic violence arrest). T-Money sounds conflicted at times about whether he believes WFJ is a positive or negative long-term influence in his life, confessing that sometimes he hides his true personality in the community’s presence. It’s likely he’s also hiding his true self in the camera’s presence. The refusal to follow this thread of thought to a satisfying conclusion is the documentary’s fatal flaw.

There’s a sense that T-Money is on the brink of a personal epiphany that the movie doesn’t stick around to discover with him. When one of his fellow WFJ performers breaks his neck in the ring, T-Money is moved to tears in his proclamation that he wishes it was his own neck that had broken instead. The injured wrestler appears to be pleased with his time in WFJ, believing he had sacrificed his body to a noble cause. T-Money appears less convinced, but the movie doesn’t follow him long enough (or push him to speak honestly enough) to find out what that means.

Unresolved ending aside, the filmmakers do a fine job of remaining objective when they could easily have made their subject look foolish or evil. That objectivity doesn’t exactly shield the Christian wrestlers from the incongruity of infusing religion into a sport built on camp & violence, but it does allow them to be sympathetic even as the phenomenon feels increasingly bizarre. Wrestling for Jesus was far from the most essential wrestling doc I’ve seen in recent months, but also far from the worst. WFJ‘s Achilles heel is that its fascinating subject could have made for a much better movie if only the filmmakers had allowed it more time to develop & pushed for more honesty. If director Nathan Clarke couldn’t afford to dig deeper, his film could have at least benefited from some of GLOW’s outlandish hubris. There’s nothing like some old-fashioned self-aggrandizing to cover up a lackluster wrestling program.

Wrestling For Jesus is currently streaming on Netflix and Amazon Prime.