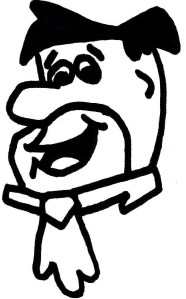 As I noted in my review of Scooby-Doo! WrestleMania Mystery, professional wrestling & animation were practically made for one another. Their shared love for campy violence, garish costumes, and corny jokes make them a heavenly pair. Crossing over the WWE brand with characters from the classic Hanna-Barbera universe is even more of a genius move, as it allows for some of wrestling & animation’s most over-the-top personalities to coexist in a single space. Characters like Scooby-Doo, Barney Rubble, The Undertaker, and “The Devil’s Favorite Demon”/”See No Evil” Kane are ridiculous enough in isolation. When they share a screen it’s downright magical (in the trashiest way possible). In Scooby-Doo! WrestleMania Mystery this pungently cheesy combination allowed for John Cena’s superhero strength & Sin Cara’s apparent ability to fly match the Mystery, Inc. gang’s seemingly supernatural monsters (in that particular case a “g-g-g-ghost b-b-b-bear”). In The Flintstones & WWE: Stone Age SmackDown the combo not only connects both The Flintstones’ Honeymooners-style comedy and the WWE’s complete detachment from reality with their roots in working class escapism, it also revels in the most important element in all of wrestling & animation, the highest form of comedy: delicious, delicious puns.

Let’s just get the list of Stone Age wrestler puns out of the way early. The Flinstones & WWE: Stone Age SmackDown features the likes of CM Punkrock, John Cenastone, Brie & Nikki Boulder, Marble Henry, Daniel Bryrock, Rey Mysteriopal, and Vince McMagma. CM Punk & Mark Henry even adapt their catchphrases to the Stone Age setting, calling themselves “The Best in the Prehistoric World” & “The World’s Strongest Caveman” respectively. Daniel Bryan makes no adjustments to his go-to “Yes! Yes! Yes!” chant (not a lot of room for wordplay there) but it’s put to great comical use anyway. Speaking of refusing to play along with the Stone Age puns, The Undertaker appears in Stone Age SmackDown simply as “The Undertaker”. I’m not sure if they had problems working a great pun in there (Try it at home. It’s a tough one.) but the side-effect is kind of charming anyway: it makes it seem as if The Undertaker has been alive forever, just sort of skulking around graveyards, waiting for a wrestling match.

In the Scooby-Doo crossover the WWE Superstars are already world famous and idolized, even more so than in reality; they even have their own WWE City complete with a Mount Rushmore style tribute to the championship belt. In The Flinstones crossover they’re just working class Joes (with impeccable physiques) that live milquetoast lives before a wrestling promotion is built around them. The wrestling promotion in question is FFE (Fred Flintstone Entertainment). Fred builds the enterprise from the ground up as a get-rich-quick scheme meant to fund a couples’ vacation to Rockapulco. As a WWE stand-in, FFE does a great job of poking fun at itself. At one point Fred is giving a pep-talk to his Superstars, urging them to “tear each other’s heads off . . . in a family-friendly way, of course,” satirizing WWE’s self-contradictory brand of PG violence. FFE differs in WWE in other ways, of course, as it’s a very small organization just trying its darnedest to put on a good show for the folks out there in the audience, which is a far cry from the real-life juggernaut’s billion dollar industry. There’s a good bit of blue-collar workplace humor towards the beginning of the film that recalls the The Flintstones’ Honeymooners roots and that vibe carries on nicely into the mom & pop wrestling promotion Fred creates once the plot picks up speed.

The only thing Stone Age SmackDown gets horrifically wrong from the original Flinstones series is Barney Rubble’s voice. The other characters aren’t perfectly imitated, but they’re at least passable. Barney is just not the same person at all, trading in his dopey baritone for a nasally “wise guy, eh?” voice that feels like a violation of the original character’s nature. The rest of the film is pretty much on point, though. In addition to the rock puns & working class humor mentioned above, the movie features enough Rube Goldberg contraptions, dinosaurs as appliances, visual gags (“We’ve got bigger fish to fry” is a pretty great one that you can probably imagine without the image), and swanky-kitsch music that feel true to the original cartoon. In a lot of ways, Scooby-Doo! WrestleMania Mystery brought the Hanna-Barbera characters to WWE’s world and Stone Age SmackDown is almost an exact reversal, with pro wrestlers making the time-traveling journey to Bedrock. There are a few modern updates to the Flintstones’ visual language (like wall-mounted TVs and computer tablets), but they don’t do much to distract from the show’s classic charms. In fact, the digital HD update provides the format a very vivid, vibrant look that intensifies the original series’ pop art appeal immensely.

Even though the movie is mercifully short it still makes time for fun tangents like CM Punkrock’s world-class promos, history’s first cage match (between The Undertaker & Barney Rubble of course), and some absurd sexual leering at “The Boulder Twins”. It’s a much quicker and less complicated film than the Scooby-Doo crossover and all the better for it. Plus, I really need these crossovers to work out long enough to get that Stardust Meets The Jetsons movie I’ve been clammering for. I desparately need that to happen so, as Fred puts it in Stone Age SmackDown, “Let’s yabba dabba do this” y’all. Keep these goofy wrestling cartoons coming.