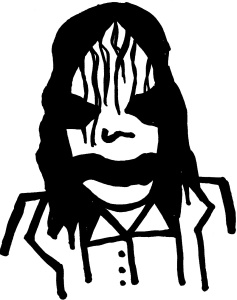 In the first Sinister film children were often seen, but not heard. This is because Ethan Hawke’s protagonist lived in a house crawling with ghosts of the silent, but murderous tykes and kept this most unsavory detail to himself, struggling with the kids’ fucked up pasts on his own instead of involving his family. The film took a long time to get its mythology nailed down, but by the end it established that there was a real life “Boogieman” that recruited kids to murder their parents & join him in some sort of vague, blood-soaked otherworld. Part of what made the movie work was that the details of this set-up were kept vague & mysterious, revealed one at a time to an increasingly freaked out Hawke until he himself was confronted with one of The Boogieman’s pint-sized foot soldiers. Of course, it’s difficult to keep up this air of mystery in a sequel once the beans have already been spilled & the more Sinister 2 tries to flesh out the details of its predecessor the more it makes itself out to be an amusingly goofy slice of schlock by comparison.

Taking an exact opposite approach to the first film, Sinister 2 depicts The Boogieman’s recruitment tactics from a child’s POV instead of an academic one. This is a world where The Boogieman is very real, actually in your closet, and referenced in ancient texts “across all cultures” (sometimes known as Bughuul to his friends). The first film presents the idea that The Boogieman mayhem spreads when people living in a house where a family was once murdered by one of his child sentinels move to a new place. The first film also made it seem that this was a linear progression, that The Boogieman hopped from House A to B to C without ever looking back. Well, that idea’s thrown out the window here & apparently all the old Boogieman haunts are eligible for new victims. On top of that development, he’s now also able to haunt laptops through creepy computer viruses, because why not? There was also no indication in the first film as to why little kids were filming themselves brutally murdering their own families in the first place except that super 8 video looks really cool & grainy and it drove the too-curious protagonist crazy. Here, it’s given a purpose: the kids are filming their bloody deeds as gifts to The Boogieman, a sadistic sort of sacrificial offering, an “aesthetic observance of violence”, “murders captured in art”. For a thousands year old demon who manipulates children into becoming murderers & dresses like a Industrial Goth jackass, you gotta admit that his penchant for collecting art at the very least affords The Boogieman some cool points. At least his mayhem has some sort of a purpose (although it worked perfectly well in the first film without one).

The super 8 films are, of course, the main draw of the Sinister franchise and, as I stated in my review of the 2012 original, they sort of pose the series as a kind of throwback anthology horror with an extensive narrative wraparound. Sinister 2‘s super 8s open with a bang. An especially creative ghost kid, formerly a real kid, shows off a fishing trip where he tied up his family & fed them to a gator. I’m going to repeat that. This vile little tyke fed his entire family to a fucking gator. It’s a gnarly image & although there’s some really gruesome, inventive deaths involving electrocution, crucifixion, and ancient dental tools elsewhere in the film, I feel like the gator entry really drives home the half goofy, half . . . umm, sinister vibe the film achieves on the whole. The super 8s are where the movie’s terror is most effective & otherworldly, relying heavily on a grindhouse-era sound design & some meta reflections on the nature of the horror film as an artform. It’s also where the film is most enjoyable in pure surface pleasures.

Although there’s also some thought given to the cycles of domestic abuse & how the patterns of physical violence can be learned & passed down in a family here, it’s somehow still very apparent that there’s a lighter, goofier tone at play in Sinister 2 than there was in the original. A lot of credit for that tone goes to actor James Ransone (who’s had some wonderful turns as Ziggy Sobotka on The Wire, the pimp Chester in Tangerine, and Dingy Dave in John Waters’ A Dirty Shame) for being able to balance the sillier lines of thought with the distinct horror of occult-style massacres. Partial credit for keeping the tone light also goes to Shannyn “A Knight’s Tale” Sossamon’s awful Southern drawl for helping me remember to not take the film too seriously. This balance between goofy horror movie & something more affecting is also reflected in the film’s two distinct kinds of scares: the cheap jump scares & the legitimately creepy vibes of the grainy super 8s. Sinister 2 has its cake & eats it too. It’s not nearly as tasteful or artsy as the first movie, but it sort of goofs its way into earning just as much horror movie goodwill through its lighter tone & the fact that all we really wanted to see as an audience was more of those super 8s, anyway. I mean, that kid fed his entire family to fucking gator. How cool is that?