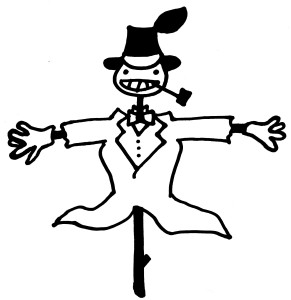 Acclaimed, visionary animator Hayao Miyazaki recently announced that he’ll be returning from what has been a very brief “retirement” to work on a 3D-animation short film, which is exciting news for rabid fans of Studio Ghibli & innovative visual craft of all kinds. Not being especially well-versed in Ghibli’s or Miyazaki’s history, I didn’t realize that this decision was a case of history repeating itself. Miyazaki had “retired”several times before in the past, once doubling back on his resolve to return to the director’s chair (does that idiom translate to animation?) to helm the somewhat troubled production of 2005’s Howl’s Moving Castle. Whether or not Miyazaki was brought in as a pinch-hitter/afterthought on a project that apparently needed a strong guiding hand, Howl’s Moving Castle was well worth the animation giant’s time & efforts. It’s not the most mindblowing or heartwarming film among the few Ghibli titles I’ve seen but it is a singularly magical experience that the world is better off for being enriched with (with its context as a pacifist take on the war in Iraq being especially fascinating). If there’s one thing I’ve learned about Miyazaki in the few works I’ve seen from him it’s that the world is all too lucky to have him & we should all be grateful for each precious gift he delivers on his own time.

I call Howl’s Moving Castle magical because it’s a film that values the folklore of magic, wizards, and witches over the more human realm of physical labor & constant war. A lover’s quarrel between The Wicked Witch of the Waste(land) & a frivolous, vain wizard named Howl claims the health & well-being of an innocent passerby, a young hat shop clerk whose meeting of Howl in passing enraged the jealous, possessive witch. This jealousy inspires the wicked witch to cast a spell that ages the hat shop girl horribly, so that she loses her precious youth & beauty to an old, withered body that upends her life. Determined to win back her cursed youth, the girl moves into Howl’s castle, which is indeed a moving, walking, transitive structure that would serve as event the most casual of steam punk’s wet dream. What she discovers is that he wizard is in a perpetual state of adolescence, in desperate need of someone to care for his body & home, and prone to teen angst temper tantrums that result in him summoning “the spirits of darkness” when he’s bummed & exclaiming things like “I see no point in living if I cant be beautiful!” Howl is in no shape to deal with the crushing realities of a hard-fought war & ends up needing the help & emotional support of the cursed hat shop girl just as much as she needs him.

What feels so right about the approach to magic in Howl’s Moving Castle is just how fluid everything feels in the details. The rules of the curse seem to change from scene to scene as the girl’s age fluctuates depending on her mood. Enemies who initially appear to be pure evil soon reveal themselves to be hurt, vulnerable souls in need of repair. Physical spaces (especially the titular castle) & people’s bodies (especially the wizard’s) change constantly, directly reflecting the ebb & flow of a universe that can be hopelessly cruel or endlessly wonderful depending on the tides of fate in life’s current direction. The only thing that seemingly doesn’t change is the way the film values magic & fluidity over the concrete, destructive concerns of governments & war.

Appropriately enough, it’s that exact value system that makes Miyazaki & other folks at Ghibli feel like such a gift & a blessing. They’re constantly exploring new ideas & techniques within their craft, but their general spirit is deeply rooted in an old world magic & tradition that feels both authentic & endlessly endearing. It’s a testament to how powerful the the studio’s output is that I was greatly impressed by Howl’s Moving Castle, but still hung up on the Ghibli flim about racoon testicles that I had just watched a few days before. Every Miyazaki work is worthy of attention & adoration to some degree and Howl’s Moving Castle was no exception to that rule. It wasn’t the most spectacular, wonderful, magical animated feature I’d ever seen or anything like that,but I still felt like I was lucky to have seen the film, which feels like par for the course for Miyazaki & his peers. May his retirement never be permanent & may the studio never officially close its doors. May our luck never run out.