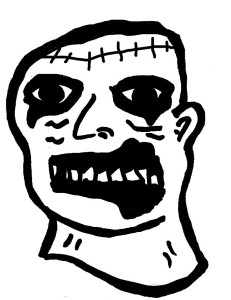 I’m not a video game nerd. The last legitimate gaming system I got excited about was the Nintendo 64. The only one I’ve bought since was a used Wii and that beaten-up relic served exclusively as an emulator for NES games. As such, I’ve never had much interest in the Resident Evil film franchise. My limited knowledge of the series, based entirely on vague hearsay about its video game source material, has been that it’s about a lady who shoots zombies in some kind of underground bunker. While I’m not over the moon about video games as an entertainment medium, I do actively seek out eccentrically inane movies, but there was just never anything about yet another zombie action horror starring a sexy lady with a pile of guns that had much promise for Super Mario Bros. levels of potential silliness in a cinematic video game adaptation. There are now five Resident Evil movies in what has become a decade-long franchise, however, which lead me to suspect that there was more going on here than just a walking dead genre pic with little to no distinguishing features in a crowded field of zombie media. It’s true, too. Resident Evil is more than just a zombie-filled shoot-em-up featuring a beautiful woman with a giant gun. In fact, it actually kinda holds its own as one of the sillier & more entertaining video game adaptations out there, much to my surprise.

While I wasn’t exactly wrong in assuming Resident Evil centered on a widespread epidemic of generic zombie mayhem, I did the movie a huge disservice by reducing its setting to a mere underground bunker. The symbolically named Umbrella Corporation (a detail I assume was carried over from the video game), which periodically deals with very normal corporate modes of money making & privately makes most of its profit off of biochemical weaponry, is the owner of said underground bunker, known as The Hive. The bunker’s underground employees, blissfully unaware of the company’s warmongering, are transformed into the aforementioned zombie horde when one of the more volatile chemicals they work on is released through the bunker’s vents (supposedly) by mistake. As the infected, undead Umbrella Corporation employees transform into monsters, they also become moving targets for a team of leather-clad supersoldiers & a Borne Identity/American Ultra type badass who can’t remember her past but seems to know more about the facility than she should. As her memory slowly returns, our hero must piece together whether or not she’s responsible for the initial outbreak or if there’s some kind of other, larger betrayal unfolding before her. Meanwhile, The Umbrella Corporation’s surveillance cameras seem to be recording these supersoldiers’ every move as they become unwitting participants in a zombie-killing, viral experiment. Also, some strange, not at all human creatures & a childlike AI hologram pop in to push the movie past its zombie-stomping roots into some strange sci-fi horror territory. Its all a lot more fun & complex than I expected, however corny & hamfisted.

Resident Evil comes from a time when video game adaptations were attempting to move on from children’s movie fare like 90s productions Street Fighter & Double Dragon into something more violent & “adult,” like Doom. Director Paul W.S. Anderson splits the difference & lands the film halfway between PG-13 & R (not that the MPAA saw it that way) in terms of sensibility. There’s a violence & grittiness in the film’s nonstop parade of zombies on fire, exposed muscle Rottweiler demons, undefinable The Thing-type mutants, and flashbacks to a blurred sexual encounter the film appears to find very important to the plot, but something about the way they’re handled makes it play like kids’ stuff, just like Anderson’s surprising violent (and even more surprisingly competent) Mortal Kombat adaptation. This is a teenager’s sweet spot in terms of maturity level, a tone easily recognizable in the film’s choice to dress its star, Milla Jovovich, in a post-apocalyptic negligee for most of its runtime & two sheets of paper-thin hospital gauze at its climax. Jovovich’s ass kicking commitment to the role, combined with similar sincerity from Fast & Furious “family member” Michell Rodriguez, cuts down on some of that teenage boy booby-ogling, though, to the point that it mixes with the intense body horror, George Romero brand zombie mayhem, and stray notes of otherworldly sci-fi (an aesthetic Anderson accomplished a lot more with in his film Event Horizon) to make for a fairly decent, amusingly campy action cheapie I would’ve loved had I seen it when it was haunting theaters & I was 15. I appreciate Resident Evil‘s teen nerd immaturity & casual adoption of weird video game ideas in its matter-of-fact silliness. At the very least, its a far better adaptation than the Rock vehicle Doom, which aims for a similar aesthetic, and it got me curious enough about where the series could go from such a ludicrous starting point that I just might check out Anderson’s five gratuitous followups now that I’ve finally been initiated.