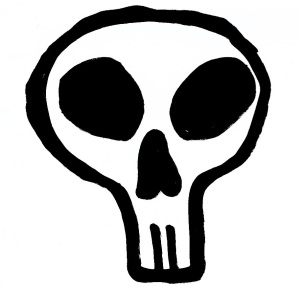 Common wisdom tends to posit Francis Ford Coppola’s Apocalypse Now as an art film upheaval of Joseph Conrad’s novel Heart of Darkness, but I think there’s something undeniably pulpy in the film’s final act that compromises that reading. Marlon Brando’s infamous performance as Colonel Kurtz is an intensely weird vision of madness that elevates the material in a last minute left turn, but the more I mull over the character the more he plays like a true archetype of a mad villain than a modern subversion of that trope. This rings especially true after watching the drive-in horror cheapie The Unknown Terror. The villain of The Unknown Terror is a mad scientist type who has won over the hearts of a remote Mexican community by “conquering the God of Death” with First World medicines, an act of “charity” that has made him something of an unchecked deity among the locals. Much like Kurtz, the wicked Dr. Ramsey loses control of his hubris and lets the newfound power go straight to his head. He also loses his sanity and becomes enraptured with the natural world, dangerously so. The idea that Dr. Ramsey would be modeled after Kurtz isn’t too much out of the ordinary, given the influential nature of Conrad’s novel, but the way his character is played for cheap drive-in thrills in The Unknown Terror points to a pulp aspect of Brando’s odd mode of scenery chewing in Apocalypse Now, an energy he would later repeat in The Island of Dr. Moreau.

Even outside of its context under the umbrella of Heart of Darkness adaptations/bastardizations, The Unknown Terror is still an entertaining slice of schlocky sci-fi horror. In a way it plays like the major studio productions in the decades before its time that promised to have something for everyone: music!, adventure!, romance!, scares!. Yet, it still avoids feeling entirely like cookie cutter tedium, since each of these individual elements are executed surprisingly effectively. The musical performances are badass calypso tunes about a mysterious Cave of the Dead that haunts local superstition, featuring menacing lyrics about how Man has to “suffer to be born again.” The adventure is an Indiana Jones-style spelunking effort meant to retrieve a man lost to the Cueva Muertes, a cave believed to be a physical manifestation of Purgatory, where you can hear the screams of the damned. The romance is a love triangle disturbed by a crippling accident in the past & a seething air of jealousy that bubbles to the surface in the rescue mission attempts to recover the missing explorer in the Cueva Muertes. The scares are, of course, what they find in the cave and what has been driving the once reputable Dr. Ramsey to the point of madness. What Ramsey has been hiding from the villagers is that the screams coming from the Cueva Muertes are not at all the screams of the dead, but rather the screams of the very much alive survivors of his cruel science experiments on unsuspecting human subjects.

The same way the evil scientist of The Flesh Eaters cultivates & weaponizes a pre-existing, natural virus, Dr. Ramsey orchestrates the horrors of The Unknown Terror by cultivating & weaponizing a killer fungus. The Cueva Muertes is covered in a very peculiar fungus that spreads through “binary fusion,” latching onto parasitic hosts, namely humans, and transforming them into hideous fungus monsters.  The visual effects of this cave fungus are more or less on par with what you’d expect from this era of filmmaking. The “monsters” are men in Halloween costume getups. The “fungus” covered set looks like a combination of a Buck Rogers alien terrain & a nightclub foam party with a science fair volcano theme. What makes The Unknown Terror at all memorable is the strength of its ideas within its cookie cutter genre film shape, dragging in the specificity of its Of Human Bondage disability shame & the Heart of Darkness vibes of its mad scientist villain to elevate the auto-pilot material, when it didn’t need to try nearly as hard to fulfill its destiny as double bill drive-in fodder. I would never suggest pairing any film with Apocalypse Now, since Coppola’s supposed masterpiece is already an overlong three hour affair, but I do think The Unknown Terror shines some unexpected light on how that film mixes a little genre film cliché into its overreaching art film ambition, especially when it comes to the character of Kurtz. The Unknown Terror is entertaining enough even without that connection to a beloved 1970s classic, but the way it resembles the standard-issue shape of so many of its contemporaries means it wasn’t likely to be remembered otherwise.