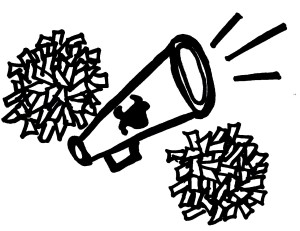 One of the more overlooked aspects of the 90s was just how strong its high school comedies were. Titles like Clueless, But I’m a Cheerleader, Bring It On, Election, Jawbreaker, and 10 Things I Hate About You don’t get nearly enough credit for being some of the most playfully subversive and visually meticulous comedies of the past few decades. Every now and then we’ll see an admirable throwback to that era that pretty well captures the vibe: Mean Girls, The To Do List, The DUFF, etc. However, with the new microbudget indie release (& debut feature for writer-director Irving Franco), Cheerleader, we see the 90s high school comedy contorted into an entirely different, newly exciting beast. Cheerleader is a surprisingly dark comedy that repurposes the subversive bubblegum pop of 90s teen movies for a quietly surreal fantasy piece. The film exists in a cartoon reality of its own outside time & logic and uses familiar teen comedy beats to establish a darkly surreal mood and a tender mode of complete emotional devastation. It’s subtly brilliant, quietly intricate, and deserves the mass attention of wide distribution, especially considering the way it evokes an era of currently bankable nostalgia by reimagining instead of merely mimicking.

Helping establish its function as a fantasy piece, Cheerleader deals strictly in archetypes: The Jock, The Burnout, The Gossip Queen, Her Cohorts, etc. Their high school hierarchy is disrupted when the Popular Girl cheerleader sets up a date with the Total Nerd loser in order to make her on again/off again boyfriend, The Jock, jealous. While on the date Mickey discovers that she actually has genuine feelings for the hopelessly awkward Buttons. It’s an unexpected turn that not only throws off her plans to rouse jealousy in both her captain of the basketball team beau & her too old to still be in high school scumbag of a secret lover side fling, but also reveals to her what true desire feels like. While trying to make a big deal out of silly high school mind games Mickey accidentally discovers something that is a Big Deal, but can’t wrap her mind around how to work it into her already set in stone public persona.

Told from Mickey’s perspective, Cheerleader starts with a gentle mocking tone that pokes fun at the way its protagonist gets lost in thoughts like, “It’s nice to look nice or feel good or whatever” and the way she constantly thinks aloud, qualifying each statement with a “I think,” “I feel,” “I guess,” . . . or whatever. As you get to know her, though, her anxiety about being eternally self-aware about her public image & her constant need to feel desired takes on a decidedly tragic air. That’s why it hurts so much that when she actually experiences that genuine attraction from the equally self-conscious & anxious Buttons, she’s not sure what to do and mostly just allows herself to mentally & emotionally detach. The film starts like a lightly satirical comedy, but it morphs into something much darker & more empathetic over time.

One of the more immediately striking aspects of Cheerleader is its intensely meticulous visual palette. This film is 100% Tumblr-ready. Although its temporal setting is never made explicit, its timeline seems to fall somewhere between 1988-1992. Pastel windbreakers, Max Headroom-style screensavers, notebook grid wallpaper, French fries, and scrunchies map out a familiar era of past fashion & graphic design, but serve more to exaggerate an artificial fantasy space than to generate nostalgia. In Cheerleader‘s more lyrical moments the nonsense computer graphics of Buttons’s garage full of bleep bloop machines eat up the entire screen & serve to amplify the ever-intensifying unraveling of Mickey’s internal psyche. For a film so wrapped up in the meaningless machinations of high school relationships between 2D archetypes, it’s incredible how much of Cheerleader‘s visual palette plays like a quietly psychedelic art piece.

It’s so easy to get wrapped up & lost in Cheerleader‘s visual detail: the pink & blue lights, the gold eyeliner, the light-up make-up mirrors. This is an intensely sensual film. The atmospheric loops of its dreamlike score sound like the opening sample to a hip-hop song where the beat never actually drops. There’s a purpose to that sensory disorientation that extends far beyond art for art’s sake surrealism, though. Cheerleader creates an artificial environment and populates it with cookie cutter archetypes, but uses those pieces like players in a stage play to dig into some upsetting revelations about internal & external pressures on the teen psyche.

I’ve seen that same artificiality put to similar use in the best teen comedies of the 90s (Clueless & But I’m a Cheerleader being personal favorites), but nothing about Cheerleader plays like a going through the motions retread. The film quietly & confidently carves out its own loopy, dreamlike space within that genre that plays much more like deliberate subversion than empty nostalgia. It’s a consistently surprising work that at once functions as a satirical comedy, a doomed romance, and a surreal mental health drama without any of those individual parts conflicting with each other, a difficult balance to strike considering its dedication to subtlety & tenderness. I hope it gains more traction as more people get to see it, because I could easily see a (much-deserved) cult following easily forming around it.