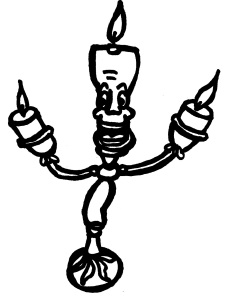 I think the burning question about this recent string of live action Disney remakes is: why do this at all? Is this really necessary? Why instead of coming up with new stories are they remaking “the classics”? After this rendition of Beauty and the Beast, I have fewer answers than before, and I didn’t have many then.

The main draw to this version is the all-star cast: Emma Watson, Ewan McGregor, Ian McKellen, Emma Thompson. All the performances were fine, some even great; it’s just a shame many of them were hiding behind less than good CGI for what was basically the whole movie. That being said, Emma Watson played the role of Belle with an honest earnestness even when the rest of the cast was computerized. She’s actually made for this role, since the Disney version of Belle is as close to Princess Hermione as you’re ever going to get.

One of the ways this remake tried to freshen things up was by giving more explanation and backstory for the characters. Sadly, most of that felt like a forced afterthought. For instance, we get to hear about the Beast’s mean, old dad, but we never catch the Beast’s (the Prince of the fairy tale’s) name, nor any details of how exactly his dad was bad. Belle’s new, fleshed out history was in a few ways worse, in that it made the whole timeline of things nonsense. She quotes Romeo and Juliet, but has escaped Paris because of the plague. If you know anything about the history of the Black Plague & Shakespeare, or have access to Google, then you probably know that those two things are about 200 years apart. Sure, it’s nice to find out why exactly she’s stuck in this awful town and why she has a dead Disney mom, but I feel like it’s a little bit unnecessary. Which I guess brings us to the other character change-up, the elephant in the room: the gay stuff.

Oh, Le Fou, you poor thing. As the controversy around this movie mounted around the idea of him being gay, I already thought it was too good to be true. In my heart, I knew that there was no way Disney was going to make a fully formed human being of a gay character. At least I had no hopes to crush. He is a lovesick fool who occasionally gives catty advice to equally swooning gals. He’s the same old sniveling sidekick as he is in the original, just this time with more innuendo and a catty attitude. Having it cranked up a couple notches isn’t necessarily a bad thing, but given Disney’s track record on gay characters (Oh hey that one character in Frozen for 5 seconds and Ursula) it’s a bit tasteless. Though Le Fou is coded as a stereotypical sassy gay friend, I’m not going to lie, the dynamic between Gaston and him was what kept me sane throughout. In any other setting, their give and take would have made for a humorous cabaret type act: Gaston the slimy hypermasculine villain, Le Fou his emotional support. The musical duet between the two of them is one of the highlights of the movie.

In fact, Beauty and the Beast shines brightest when it comes to the musical numbers executed by real people. In the opening sequence the choreography is fun and mesmerizing. Belle’s iconic opening number is full of wonderfully synchronized moves. It’s fun, until it gets to the castle. It’s fun until you have to witness a bunch of 3D animated flatware execute a Busby-Berkeley style number in a movie that’s supposed to be a live action remake. It just feels like such great irony.

The real saving factor here, though, is that no matter how bombastic the tunes, over dramatic the themes, or mediocre the animation, this movie has a light hearted laugh at itself every now and then. It’s a pleasant reminder than in the midst of everything else this is still just a family film. Still, it’s hard not to watch it and think of the beloved animated classic longingly, especially as it just keeps dragging on and getting bogged down with new superfluous details, unmemorable added songs, and an aesthetic that could have sorely benefited from practical effects.